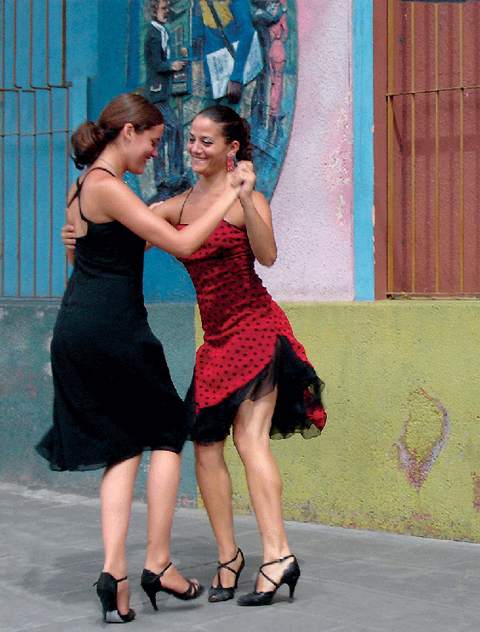 The joyful, effervescent spirit of the tango is alive and well on the streets of the working-class neighborhood of La Boca in Buenos Aires. When the pressures of daily life seem unbearable, a stroll down the colorful Caminito de la Boca can revive even the most jaded of souls. A sip of yerba maté. A thrilling glimpse of artistic brilliance. An unforced smile from a street performer lost in the glide of the tango. These simple pleasures breathe life into a people and evoke in each of us a thirst to return and reconnect with one another as equal spirits, dancing together across time and culture.
Photo © 2006 Justin Mog
Peace Corps Volunteer
Paraguay 2005-2008

Argentina/República Argentina
Southern South America, bordering South Atlantic Ocean, between Chile and Uruguay. Rich plains of the Pampas in north, flat to rolling plateau of Patagonia in south, rugged Andes on western border. 2,780,400 km2 (slightly < 30% of the US), 10% arable.

On a Hoof and a Prayer
by Polly Evans

Book Description
Subtitled Exploring Argentina at a Gallop and published in 2007, On a Hoof and a Prayer is the account of journalist Polly Evans learning to ride a horse in the land of the gauchos, and then going on to explore Argentinean culture, customs and history.

The Disappeared
by Gloria Whelan