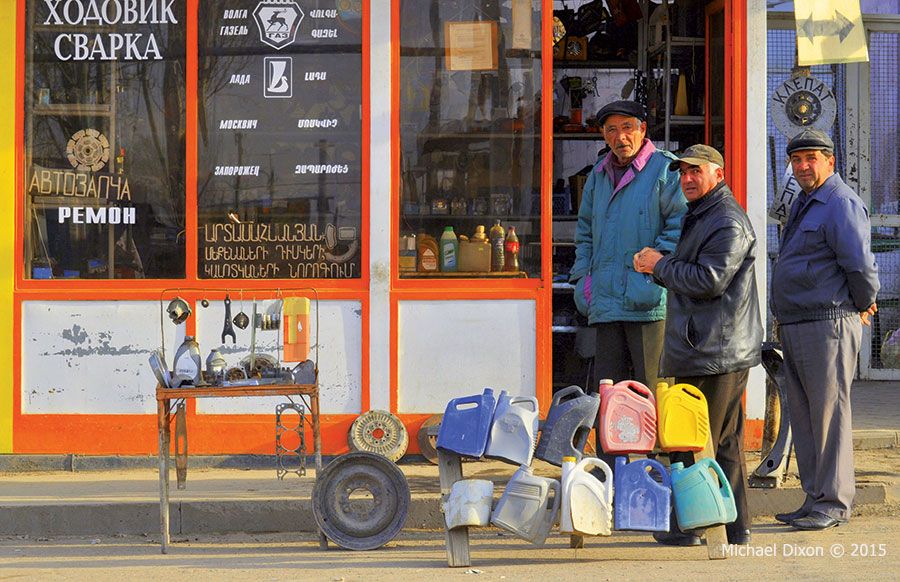 Businesses were just opening their doors as these gentlemen set out a display of new and used goods at an automotive repair shop in Gyumri, in northwestern Armenia. Small businesses are the backbone of the economy here and in all of Armenia.

The effects of the disastrous 1988 Spitak earthquake can still be seen in Gyumri today. Despite ongoing efforts to rebuild the city, many still live in temporary housing. A point of pride, however, are the 18th- and 19th-century buildings that withstood the worst of the earthquake damage and today stand as testaments to Armenia’s unique architectural style. 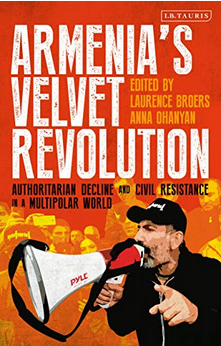 Summary:
This volume of articles examines Armenia’s April 2018 popular uprising against corruption and ineffective government, which culminated, counter to most expectations, in the peaceful overthrow and replacement of the prime minister and continuing impassioned commitment to further reform. The diverse approaches and perspectives of the contributors anchor an unusually full review of the context and likely future repercussions of the landmark event.

“This is the definitive history of Armenia's Velvet Revolution. The volume provides context, analysis, and nuance regarding Armenia's impressive show of people power in 2018, and prospects for longer-term transformation. Kudos to the editors and authors of this masterful collection.” (Erica Chenoweth, Harvard University) 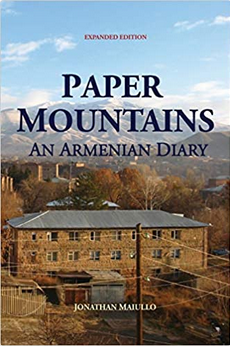 Summary:
The author shares the diaries he kept during the two years (2008-2010) he spent teaching English as a Peace Corps Volunteer in provincial Armenia. Determined to see and learn everything he could about the land, society, and culture, he explored the country, often on foot, whenever he could. Numerous online reader reviews praise his sensitive, culturally attuned way of looking into everyday Armenian life and the subtlety and elegance of his writing. 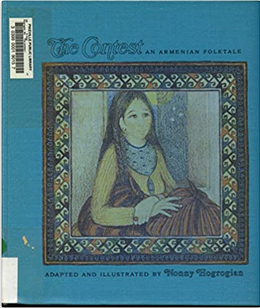 The Contest: An Armenian Folktale
Adapted and illustrated by Nonny Hogrogian

Summary:
An adaptation of an Armenian folktale about two robbers courting the same woman:

Two robbers, Hmayag and Hrahad, meet by accident under a pomegranate tree, each having decided it was time for lunch. To their amazement, they find their bokhjahs contain identical lunches. It does not take long before they discover that they are engaged to the same girl, Ehleezah, who, of course, prepared the food for each of them. Since neither robber is willing to give her up, they agree to hold a contest with Ehleezah as the prize. The one who proves himself the cleverer at his trade will be the winner. The resulting trials are truly a test of thieves. But the outcome is not what the robbers had intended, nor does the story end as the reader might expect.

Nonny Hogrogian has used the intricate, highly decorative motifs of Oriental rugs to frame her pictures, and has placed brilliant black and white drawings to create a dazzling stage set for Hmayag's and Hrahad's good-natured rivalry and skillful sleight of hand.

ABOUT THE AUTHOR:
Nonny Hogrogian, long a favorite children's book illustrator, has used the intricate, highly decorative motifs of Oriental rugs to frame her pictures, and has placed brilliant black and white drawings to create a dazzling stage set for Hmayag's and Hrahad's good-natured rivalry and skillful sleight of hand.

Hogrogian has twice been awarded the Caldecott medal for "the most distinguished picture book of the year": in 1966 for Always Room for One More and again in 1972 for One Fine Day, which she wrote as well as illustrated. Among the many outstanding books she has to her credit are Poems Here and Now (edited by David Kherdian), Handmade Secret Hiding Places, Rooster Brother, Once There Was and Was Not (retold by Virginia Tashjian), and About Wise Men and Simpletons: Twelve Tales from Grimm (translated by Elizabeth Shub). As in The Contest, she has found inspiration for a number of her books in her Armenian heritage. She was born in New York City and is a graduate of Hunter College, where she majored in art. She is married to the poet David Kherdian (whose books she often illustrates) and they live in upstate New York. 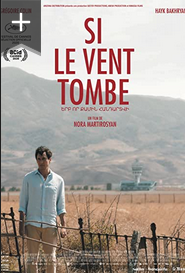 Storyline:
Should the Wind Drop (Si le vent tombe) is told from the perspective of Alain Delange (Grégoire Colin), a French engineer who is sent to assess the suitability of reopening the Stepanakert Airport. Alain knows nothing of the history of Nagorno-Karabakh nor of the political significance of the airport. For him, this is just another job, one that is almost boring. He just wants to get it done and return from this obscure outpost to his regular life in Paris.

But, gradually, the locals break through his indifference, and he begins to understand the importance of the airport from the Armenian point-of-view. He meets the director of the airport, a journalist sent to cover his visit, workers who keep the airport in immaculate condition despite the fact that it does not yet host any flights, and children and others who are doing their best to get on with their daily lives in what, to understate the case, are difficult conditions.

As for the airport...wildfires? No problem because it is protected by fire breaks. Winds? No problem because they don’t interfere with the takeoffs and landings of aircraft. Its proximity to the Azerbaijan border? Well, yes, that is a concern, but flight paths can be established in the opposite direction. Eventually Alain appears on local television and speaks to the Armenian journalist announcing his proposed certification of the airport.

But then, in the middle of the night, Alain receives a call from a representative of the French government. And everything changes.

Should the Wind Drop includes side stories about a boy who steals water from the airport and sells it by claiming it comes from a sacred healing spring, and about a “madman” who understands the forest near the border.

Official submission of Armenia for the 'Best International Feature Film' category of the 94th Academy Awards in 2022.