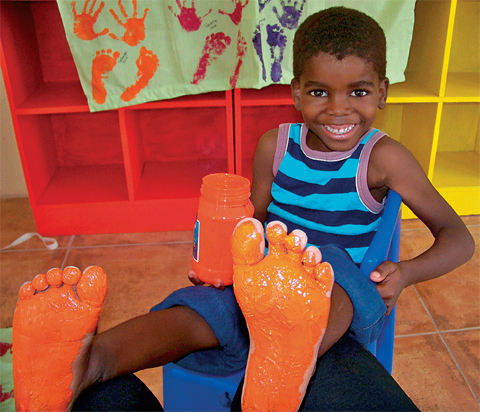 School is free in Botswana, except, that is, for pre-school. The children of those who can afford to pay pre-school fees begin primary school with a clear advantage. There are many, though, who are not so privileged. Botswana’s high rate of HIV/AIDS has orphaned many children who are, as a result, unable to attend pre-school. With the support of private donations, however, this NGO-run pre-school enables 85 orphaned children to attend for free and enjoy such fun activities as painting curtains. Here, one such child proudly displays his artwork as well as his orange-painted toes.
Photo © 2010 Patti Koenig
Peace Corps Volunteer, Botswana–present

Book Description
Subtitled A Memoir of Africa and published in 1990, Starlings Laughing is an account of author and naturalist Clark's coming of age during the waning days of the British colonial era in the Bechuanaland Protectorate, current day Botswana.