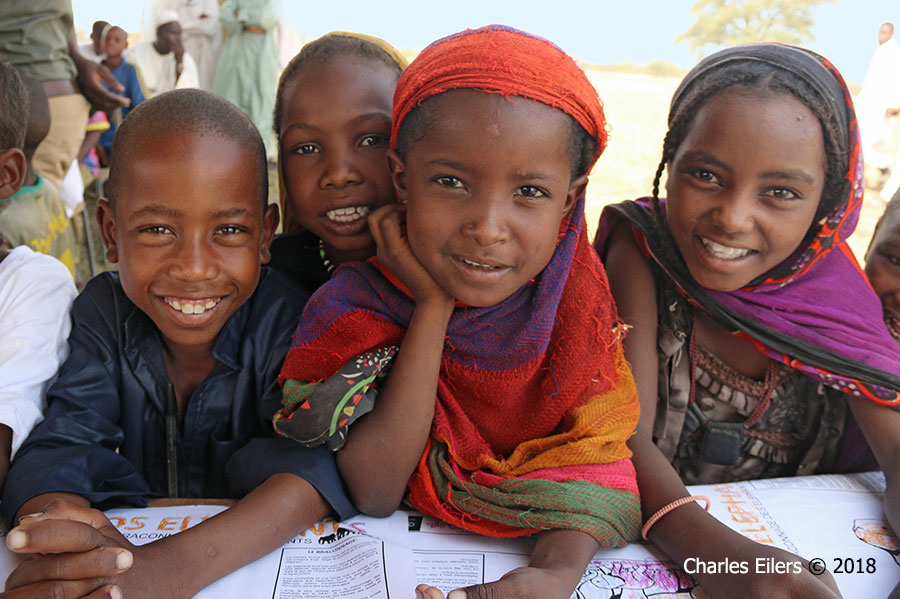 In an open tent that serves as a portable classroom, an art lesson for the children of pastoralists, who move with their grazing herds outside of Chad’s Zakouma National Park, teaches crucial lessons. While coloring in an outline of an elephant, the children learn the importance of protecting their enormous neighbors from the ivory poachers who have decimated the elephants within the park. Between 2002 and 2012, the elephant population fell from 4,000 to 400. Today, village elders alert park rangers when they spot poachers, and with such community cooperation, the number of Zakouma elephants is now over 600.
Charles Eilers © 2018
PCV Nigeria and Ethiopia 1966–1969
Teacher Training

Languages French (off.), Arabic (off.), Sara, and more than 120 languages and dialects 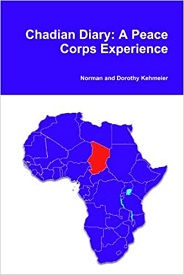 Summary:
An American couple exchanges US farm life for Peace Corps adventure near Lake Chad in Chad, Africa, in 1978–1979 during civil post-independence turmoil in the African Sahel. A journal of the thirteen months in the Peace Corps preparing for and living in Chad, and a description of the habits and the traditions of the Islamic Kanembous of Matafo.

Amazon Reader Review
Excellent Peace Corps Memoir!!! Chadian Diary is so well written that you feel like you are there with the authors during their incredible Peace Corps journey. The book is a quick read mainly because you cannot put it down. The writing is at times poetic in its descriptions of the people and landscape, yet the harsh realities of life in Chad comes through loud and clear. Highly recommend! 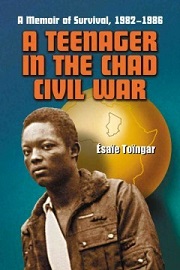 A Teenager in the Chad Civil War: A Memoir of Survival 1982–1986
By Esaie Toingar

Summary:
This work contains Toingar’s first-hand description of growing up, coming of age, and waging the ultimate struggle for survival in his war-torn country from1982 to 1986.

Editorial Reviews
Gr. 10–12. Driven from home by the raging civil war in his country in the early 1980s, Toingar joined the rebels as a teenager, witnessed unspeakable atrocities, and survived betrayal and massacre before finally escaping the military. Miraculously, he returned to high school and eventually became a science teacher before emigrating to the U.S. as a United Nations refugee. His memoir never exploits the horrifying cruelty. In fact, the chronological narrative is distant and crowded with so many dates, names, and places that it reads more like a documentary report than a YA book. But with Chad now in the news and so little published in English about the 1980s war, interested older teens (and adults) may want this close-up view.

Reader Comments
Fascinating but unpolished. I wouldn’t call this the best book I’ve ever read, but it isn’t that bad, and there are so few books available by Chadian authors that I’ll take what I can get.

I normally don’t like it when I see a ghost-writer’s byline in a book, but this is one of those that I think would have benefited from a professional writer’s input. I thought the book would be a memoir about life as a child soldier, and it was, kind of, but Toingar focused as much on other people (sometimes people he didn’t even know) as much as himself, and wrote in a very dry, emotionless tone that didn’t suit the drama of the story he was trying to tell.

Toingar joined the army at the age of 14. He didn’t want to, but neither was he forced to; it’s just that the two different armies of the civil war were constantly raiding villages, raping, pillaging, burning and killing people, and he figured it was safer to have his own gun, have military training, and be among other armed people. A military career was never his goal; he wanted to get an education and get some decent job.

He writes a fair-ish account of what was going on and what he and the Chadian population experienced, but it would have been better if I had had more background knowledge of the civil war (I had none). A foreword, written by a scholar on the subject, would have helped. I would also have liked to know the details of how Toingar escaped to Algeria and ultimately to the United States, where he lives in Iowa and works an engineer.

More personal perspective needed. As the title explains, this is an account of the civil war in Chad given by a southerner who joined the rebellion. He gives a great deal of facts and history in the course of his memoir. My only wish is that he would have given more perspective into his own feelings about the crisis and tragedy that was happening around him. 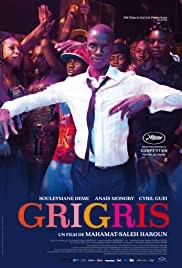 Summary: GriGris is a 2013 French-Chadian drama about a 25-year-old man with a paralyzed leg who dreams of becoming a dancer. But his dreams are dashed when his stepfather falls critically ill. To save him, Grigris ends up working for a gang of petrol smugglers.

Dance dance dance the night away African writer/director Mahamat-Saleh Haroun has created a drama based on a gifted dancer Souleymane Démé and has captured so much atmosphere of the world of Chad that his drama is truly a work of art. The lighting, the music, the actors—all are excellent and the story is deeply moving.

Grigris is a quiet gifted dancer who suffers from a malformed withered left leg, yet in spite of his deformity he enhances his income by dancing in the clubs at night: the exuberant crowd places money in this clothes and his hat in response to the exceptional dancing the man performs. His day job is working for his stepfather, Ayoub, in Ayoub's shop that offers a variety of services from tailoring to photography. And in the photography aspect of his work he meets Mimi who wants some photographs for her 'modeling job' (Mimi is a prostitute.) Grigris falls in love, but when Ayoub falls critically ill Grigris must make more money to pay the hospital bills. He is sucked into being a transporter of petrol for the black market. Things do not go well for Grigris and after some unfortunate events Grigris and Mimi must escape and in doing so confront their private demons in hopes of creating a new life.

The story is solid if a bit plodding at times, but the brilliance of Souleymane Démé's dancing alone makes the film stunning. There are many subtle and not so subtle metaphors about the current state of African nations that will touch the hearts of those fortunate enough to see this fine film. It is a plea of humanity on every level.

A Film from Chad … Once again an African filmmaker illustrates how economics, often imposed from without, destroy whilst contrasting the hope that remains within the African country's societies as reflected in its traditions. It is refreshing to find the country is Chad; one of the more impoverished French-speaking countries and less well known. It is with a heavy heart that I read the end credits and discovered how much support and finances were needed from Europe to help make the film and get it distributed. But it is not a heavy heart that the film encourages as Grigris is a survivor who makes the best of what life offers him whether that be in a city where he is Grigris the dancer or a village where he becomes Souleyman, a family man.