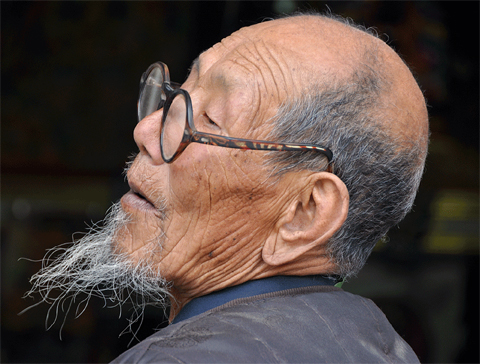 Here, on the main street of Xia’he, Gannan in the Tibetan Autonomous Region located in northwest China, a man noses through objects in a Tibetan religious shop. With his goatee and Mao-style glasses, he appears to be a traditional Han Chinese. He does not wear the traditional yak fur jacket, a some­what surprising fact as most wear it in winter in Gannan when the temperature plummets. While the vast majority of Han Chinese are not religious, there are some from older generations who have of late turned to Tibetan Buddhism, mixing in various Confucian tenets and Daoist beliefs, thereby creating a very layered and complex religion.
Photo © 2010 Mathilde Verillaud

Book Description
Subtitled Two Years on the Yangtze, this 2001 memoir is an account of Hessler's service in the Peace Corps as an English teacher, and first American resident in more than fifty years, in Fuling, a small city in China's Sichuan province.