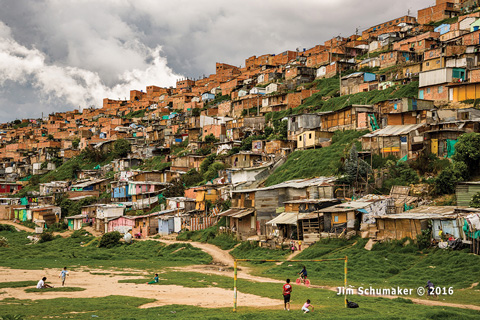 From a distance, Soacha, Bogota’s most populous borough, appears as a tightly woven tapestry of multi-colored homes and shops adorned with a haphazard array of tin roofs. Up close, it reveals a challenging landscape of fragile or nonexistent infrastructure perched precariously on steep terrain, with a resilient community making the best of limited resources. Many Soachunos came here to escape Colombia’s decades-long armed conflict. Despite the impoverished conditions, an indomitable spirit prevails and is palpable in the ever-present smiles of children and their boundless energy for soccer.
– Jim Schumaker © 2016
Sierra Leone 1970–1972
Education 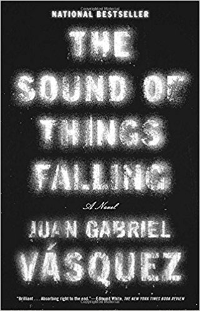 Summary:
Juan Gabriel Vásquez has been hailed not only as one of South America’s greatest literary stars, but also as one of the most acclaimed writers of his generation. In this gorgeously wrought, award-winning novel, Vásquez confronts the history of his home country, Colombia.
In the city of Bogotá, Antonio Yammara reads an article about a hippo that had escaped from a derelict zoo once owned by legendary Colombian drug kingpin Pablo Escobar. The article transports Antonio back to when the war between Escobar’s Medellín cartel and government forces played out violently in Colombia’s streets and in the skies above.
Back then, Antonio witnessed a friend’s murder, an event that haunts him still. As he investigates, he discovers the many ways in which his own life and his friend’s family have been shaped by his country’s recent violent past. His journey leads him all the way back to the 1960s and a world on the brink of change: a time before narco-trafficking trapped a whole generation in a living nightmare.
Vásquez is “one of the most original new voices of Latin American literature,” according to Nobel Prize winner Mario Vargas Llosa, and The Sound of Things Falling is his most personal, most contemporary novel to date, a masterpiece that takes his writing—and will take his literary star—even higher.
*Winner of the 2014 International IMPAC DUBLIN Literary Award

Editorial Reviews
Amazon.com Review
An Amazon Best Book of the Month, August 2013: Juan Gabriel Vasquez will draw comparisons to other major Latin American icons. But while the influence of Roberto Bolaño, Mario Vargas Llosa, and Gabriel García Márquez are present throughout his second novel, The Sound of Things Falling, he is a unique literary talent. Translated from Spanish (and exceptionally well, at that), Vasquez moves swiftly and subtly, opening in Bogota, Colombia, reflecting on the mid-’70s when the country was being taken over by drug lords and cartels (fueled by the U.S.’s hunger for cocaine). Law professor Antonio Yammara finds his fate intertwined with that of a shady ex-pilot named Laverde. But Things Falling is so much more than a drug story. This is a sensory novel. Antonio wrestles with the way he interprets by his surroundings, by how the external world affects the internal. “[I]t’s always disconcerting to discover, when it’s another person who brings us the revelation, the slight or complete lack of control we have over our own experience.” The Sound of Things Falling does so much at once: it’s a novel about how the U.S. dangerously influences Latin America, how the present never escapes the past, and how fragile our relationships--romantic and familial--can be. —Kevin Nguyen From Publishers Weekly
*Starred Review*. That story is to blame, declares a character in Colombian author Vasquez's latest novel (after The Secret History of Costaguana). Indeed, this book is an exploration of the ways in which stories profoundly impact lives. Around 1996, when murder and bloody mayhem fueled by the drug trade were commonplace in Bogotá, the young law professor Antonio Yammara befriends enigmatic stranger Ricardo Laverde. One night, assassins on motorbikes open fire on the two, killing Laverde and seriously wounding Yammara. Conflicted and at a loss to understand the damage Laverde has wrought, Yammara looks into his life story. Yammara suffers from crippling psychic and physical wounds as a result of the shooting, and his investigation takes him to Laverde's shabby Bogotá apartment, where he receives a gruesome clue from the grieving landlady. Yammara eventually finds Laverde's daughter Maya, a beekeeper who lives in the Colombian countryside. She shows Yammara photos and letters she's collected about the father she never knew. Together they lose themselves in stories of Laverde's childhood; of Maya's American mother, Elaine Fritts; and of Elaine and Laverde's love affair. Vasquez allows the story to become Elaine's, and as the puzzle of Laverde is pieced together, Yammara comes to realize just how thoroughly the stories of these other people are part of his own. 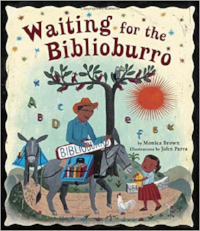 Waiting for the Biblioburro
By Brown, Monica. Illustrated by John Parra

Ana loves stories. She often makes them up to help her little brother fall asleep. But in her small village there are only a few books and she has read them all. One morning, Ana wakes up to the clip-clop of hooves, and there before her, is the most wonderful sight: a traveling library resting on the backs of two burros—all the books a little girl could dream of, with enough stories to encourage her to create one of her own. Based on real-life librarian Luis Soriano. The book introduce readers to the mobile library that journeys over mountains and through valleys to bring literacy and culture to rural Colombia.

Summary (IMDB): Manuel, 9, has an old ball with which he plays football every day in the countryside. He dreams of becoming a great goalkeeper. His wishes seem set to come true when Ernest, his father, gives him a new ball. But an unexpected accident sends the ball flying into a minefield. Despite the danger, Manuel refuses to abandon his treasure... He convinces Julián and Poca Luz, his two friends, to rescue it with him. Amid the adventures and kids' games, the signs of armed conflict start to appear in the lives of the inhabitants of 'La Pradera.'