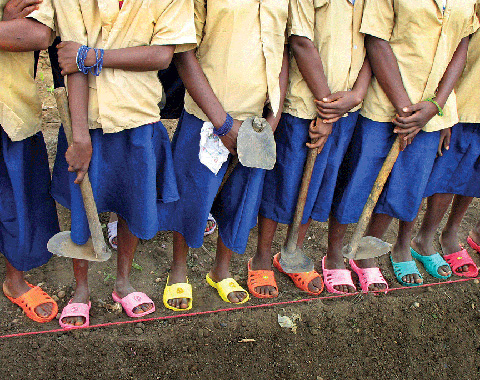 Students around the world cultivate gardens – not only for their lunches, but also as laboratories for learning. In Lekoumou District, these hands-on activities are a welcome contrast to classroom lectures that can be crowded with more than 100 students. In their gardens, students see biology, geography, math, social studies, and other subjects come to life. Parents, too, are pleased that their children are learning practical skills that contribute to the family’s food security. Here, primary school girls patiently await their turn to plant vegetables that will nourish their bodies, minds, and souls. “The classroom is like a prison,” one student noted. “In the garden we are free.”
– Mary Crave ©2007

Languages French (official), Lingala and Monokutuba (lingua franca trade languages), many local languages and dialects (of these Kikongo is most widespread)

Blood River: The Terrifying Journey Through The World's Most Dangerous Country
by Tim Butcher

Book Description
A journalist undertakes a hazardous African trip in 2004, traveling from Lake Tanganyika to the Atlantic Ocean via the Congo River. Delivers an unblinking firsthand portrait of contemporary Congo.

Monkey For Sale
by Sanna Stanley