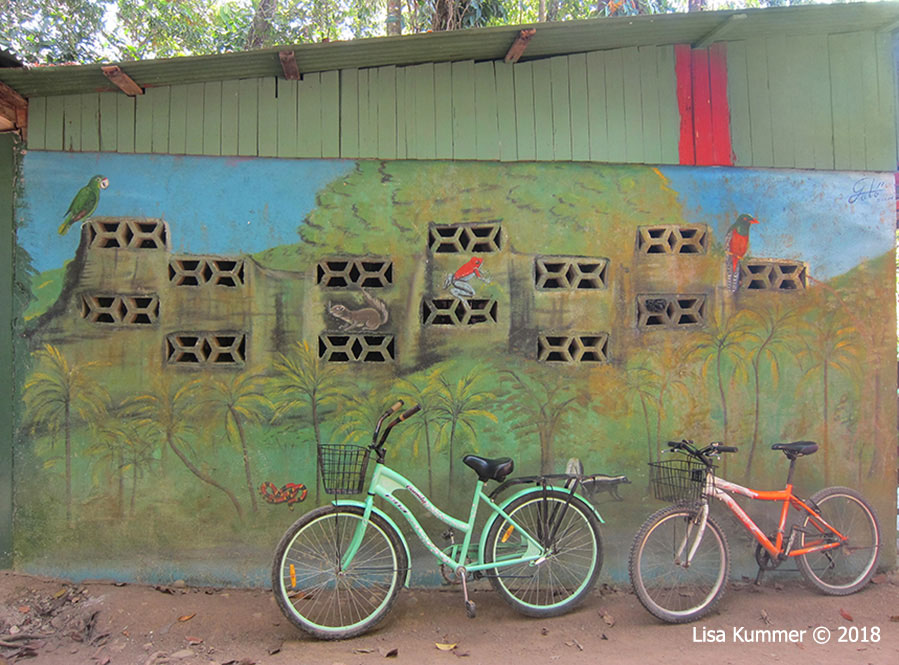 Ecotourism draws many visitors to Costa Rica’s extensive national parks and protected areas, and the country is a pioneer in this type of tourism. The rich diversity of wildlife and incredible natural beauty within its forests is breathtaking—and challenging to photograph! Luckily, local artists capture it for us, giving the visitor another way to experience the beauty of Costa Rica and appreciate the creativity of its people.
Lisa Kummer © 2018 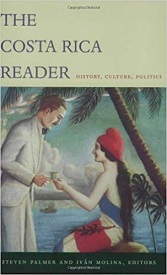 Summary:
Long characterized as an exceptional country within Latin America, Costa Rica has been hailed as a democratic oasis in a continent scorched by dictatorship and revolution; the ecological mecca of a biosphere laid waste by deforestation and urban blight; and an egalitarian, middle-class society blissfully immune to the violent class and racial conflicts that have haunted the region. Arguing that conceptions of Costa Rica as a happy anomaly downplay its rich heritage and diverse population, The Costa Rica Reader brings together texts and artwork that reveal the complexity of the country’s past and present. It characterizes Costa Rica as a site of alternatives and possibilities that undermine stereotypes about the region’s history and challenge the idea that current dilemmas facing Latin America are inevitable or insoluble.

An essential introduction to Costa Rica that includes more than fifty texts related to the country’s history, culture, politics, and natural environment. Most of these newspaper accounts, histories, petitions, memoirs, poems, and essays are written by Costa Ricans. Many appear here in English for the first time. The authors are men and women, young and old, scholars, farmers, workers, and activists. The Costa Rica Reader presents a panoply of voices: eloquent working-class raconteurs from San José’s poorest barrios, English-speaking Afro-Antilleans of the Limón province, Nicaraguan immigrants, factory workers, dissident members of the intelligentsia, and indigenous people struggling to preserve their culture. With more than forty images, the collection showcases sculptures, photographs, maps, cartoons, and fliers. From the time before the arrival of the Spanish, through the rise of the coffee plantations and the Civil War of 1948, up to participation in today’s globalized world, Costa Rica’s remarkable history comes alive. The Costa Rica Reader is a necessary resource for scholars, students, and travelers alike.

About the editors:
Steven Palmer is Assistant Professor of History at the University of Windsor in Ontario. He is the author of From Popular Medicine to Medical Populism: Doctors, Healers, and Public Power in Costa Rica, 1800–1940 (published by Duke University Press).
Iván Molina is Professor of History at the University of Costa Rica in San José. He is a coauthor of Stuffing the Ballot Box: Fraud, Electoral Reform, and Democratization in Costa Rica.

"Because Costa Rica is a small country, and because its history has been less horrific and dramatic than that of its Central American neighbors, it often receives short shrift in the classroom. This book makes an implicit and convincing argument that the details, the exceptions, and the complexities can be just as important as the generalizations and trends for understanding the whole, and that concerted attention to Costa Rica can deeply enrich our understanding of Latin America."

"Readers of The Costa Rica Reader can be assured they are getting a genuinely current 'flavor' of what the country and its people are like, as well as historically grounded materials that help explain the 'why' of this generation's flavor. The editors have deftly drawn together an extraordinarily wide-ranging set of materials, erring quite rightly on the side of brevity and variety. For the student, there are innumerable pathways opened; for the tourist, given the industry's avowed focus on repeat visitors, a single roundtrip flight may not suffice, but the reading will be cover to cover."

"This is an essential introduction to a very special country admired by many for its peaceful pursuits. The authors reveal a country with a rich heritage and diverse population."

Amazon Reader Reviews
Rarely does an anthology of original documents of historical value mingled with insightful interpretative essays come together as a coherent work. These editors, against those odds, have put the ball in the back of the net with just such a book.

The Costa Rica Reader's three-part subtitle (`History, Culture, Politics') is honored along the way with an even touch. Everyone with an interest in Costa Rica as more than a tourist destination with great beaches will find between the covers of this recent collection the stuff that builds insight and understanding.

The editors guide us through a nuanced qualification of `Costa Rican exceptionalism'… and the 70-odd pieces are brief, illuminating, and usually excerpted from something larger. Individually and as a collection, they leave the reader wanting more…not unlike Costa Rica itself in the experience of many sojourners, many of whom will never go back but who at the same time never manage entirely to leave.

Recommend… but a little dry.

An informative, historical journey through Costa Rican culture. The different formats of content (poems, stories, etc.) gives you a holistic understanding of the culture without leaving you bored. 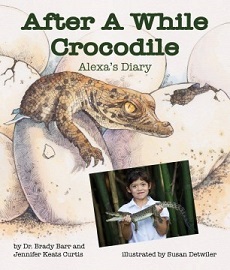 After a While Crocodile: Alexa’s Diary
By Brady Barr and Jennifer Keats Curtis; illustrated by Susan Detwiler

Summary:
Alexa and the other children at her escuela in Costa Rica have a special project: they are raising American Crocodiles. She names her croc Jefe, which means “boss,” because he seems to be in charge of all the other babies. Alexa brings him chicken and frogs to eat, and writes about his progress in her diary. Soon, her little hatchling is as big as a loaf of bread. He has grown into a juvenile and it is time for Alexa to say goodbye and for Jefe to return to the wild.

Outstanding Science Trade Book: This nonfiction picture book with a cuddle factor includes a 4-page For Creative Minds section in the back of the book and a 20-page cross-curricular Teaching Activity Guide online. After a While Crocodile is vetted by experts and designed to encourage parental engagement. Its extensive back matter helps teachers with time-saving lesson ideas, provides extensions for science, math, and social studies units, and uses inquiry-based learning to help build critical thinking skills in young readers. The Spanish translation supports ELL and dual-language programs. The enhanced ebook reads aloud in both English and Spanish with word highlighting and audio speed control to promote oral language skills, fluency, pronunciation, text engagement, and reading comprehension.

With a mixture of photographs and retro-style illustrations, this enlightening offering will entertain and educate readers.

This accessible diary, in English with occasional Spanish words and translations, gives a fictionalized account of schoolchildren’s hands-on study of American crocodiles in Costa Rica. Alexa records the progress of a baby croc from its hatching to its release in the wild.

Reader Comments
A wonderful children’s book. A perfect story about a little girl and a baby croc. Great photos and artwork. Kids will learn about crocodiles, endangered species, and as a by-product, will learn some Spanish. A powerful, very different book for kids. Must reading!

Nice for kids who like animals. One of the students in this book writes a diary of observations. I think it can influence students to want to learn more about crocodiles and the habitats they live in.

Cute with really good information. This is a cute book tracking Alexa’s involvement in the American Crocodile project. She captures frogs and insects which she feeds to the crocodiles along with chicken. Her school has a garden, also.

The book sprinkles words in Spanish throughout the text with the English word in parentheses. A nice opportunity to see Spanish words in context and perhaps reinforce these words as part of the Spanish curriculum in either classroom or homeschool.

The object of the project managed by Dr. Brady Barr and team is to save and/or protect the endangered American Crocodile. They find and retrieve eggs and then allow them to hatch and be raised in a protected environment. The children participate with hands-on experience.

A reminder that children should be taught that this was a controlled project and the crocodiles were released into the wild as soon as they were able to care for themselves.

The "For Creative Minds" back pages are chock full of interesting information for further study and investigation. 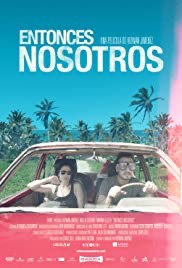 Summary: Diego, a hopeless romantic desperately trying to salvage his relationship with long time girlfriend Sofía, plans a beach getaway to propose and clear the air. A 'chance' encounter with Sofía's old friend Malena will cast doubts on his relationship and skewed understanding of love, quickly turning a perfect weekend in paradise into Diego's worst nightmare.

Official submission of Costa Rica for the 'Best Foreign Language Film' category of the 89th Academy Awards in 2017.

Really Entertaining: I was in the mood for a fun movie set somewhere exotic and this one did not disappoint! It was really funny, and the cinematography was beautiful. The drama in it was unexpectedly good too, definitely hooked me into the story. Reminded me a bit of Y Tu Mama Tambien, expect not as serious. Definitely worth watching.

Disappointing but not altogether dull: Hernan Jimenez is the most successful modern comedian that Costa Rica has had to date, no doubt about that. (Check out his stand-up comedy if you get a chance). I did, however, wish that his characters had more depth and intrigue to them. At times the dialogue was dull and could have been balanced with more comedy. This film's location (Santa Teresa, Costa Rica) couldn't have been in a more exotic location and was totally eclipsed by irrelevant dialogue and tasteless b-footage not to mention it made very evident the fact that the country suffers from poor road infrastructure. The director of photography really dropped the ball on this one. If the director had shot the film better and taken advantage of such a beautiful location it would have greatly influenced the protagonists actions and determination of why he had chosen to propose in such a visual paradise. Unfortunately for the audience this was all lost because the cinematography was so lacking that the audience was made to believe that this is just another surfer beach in Costa Rica, which I might add is not, it's one of the best. The ending of the film was as dull and unimaginative as the cinematography. I greatly respect Hernan Jimenez for his work as a comedian and actor not to mention his great work ethic but I do believe that novice mistakes were made which could have been avoided. I look forward to his future projects.

The music of Malpaís is part of the Costa Rica-contemporary compositions work, called by the band “Costarican new song.”