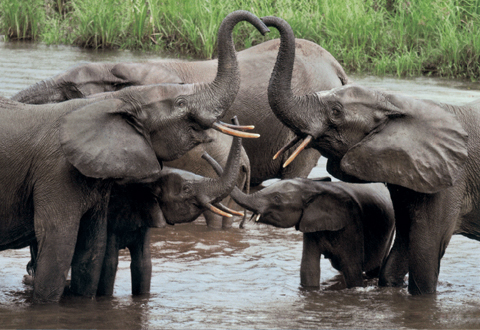 In a forest clearing in Ivindo National Park, a parade of female elephants brings its young into the sun to play in the creek. The calves mimic their mothers, raising high their trunks, testing the air for the scent of danger. With their smaller tusks, ears, and bodies, forest elephants are able to move quickly through the trees. In 2002, Gabon officials established the national park system, setting aside more than 10% of the national patrimony for 13 conservation parks. More recently, the government introduced measures to secure the parks and protect wildlife from poaching and illegal ivory trading.
Photo © 2008 Charles Eilers
Peace Corps Volunteer
Nigeria & Ethiopia 1966-69

Book Description
Anecdotes by more than thirty writers who served between 1962 and 2005. A collection of the best stories contributed to the Gabon Letter.