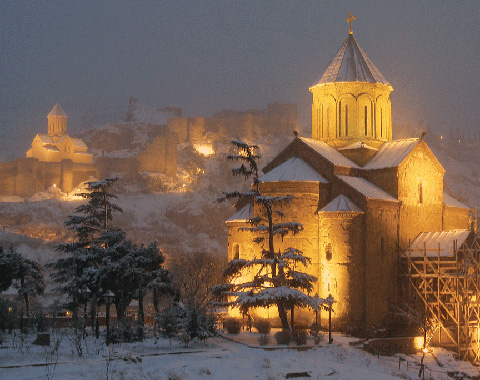 Ancient Metekhi Church, beautifully illuminated each night of the year, glows golden on this snowy December evening in Old Tbilisi. From a distance, the much older Narikala Fortress and its Church of St. Nicholas share this peaceful scene. Religious services, suppressed during Soviet times, are once again offered at both of these historic churches, allowing Georgians and foreign visitors alike opportunities for worship and cultural visits. Tbilisi is one of the world’s oldest cities, and Old Tbilisi is its heart.
– Ronald Bielen ©2009

Georgia
In Southwestern Asia, bordering Black Sea, between Turkey and Russia, with a sliver of land north of the Caucasus extending into Europe, very mountainous with many glaciers; 69,700 km2 (slightly < SC), 11.5% arable.

Georgia: In the Mountains of Poetry
by Peter Nasmyth

Book Description
The first comprehensive cultural and historical introduction to modern Georgia. It covers the country region by region, taking the form of a literary journey through the transition from Soviet Georgia to the modern independent nation state.

Georgia to Georgia: making friends in the U.S.S.R.
by Laurie Dolphin; photographs by E. Alan McGee

Pkhali/Spinach with walnut and garlic sauce