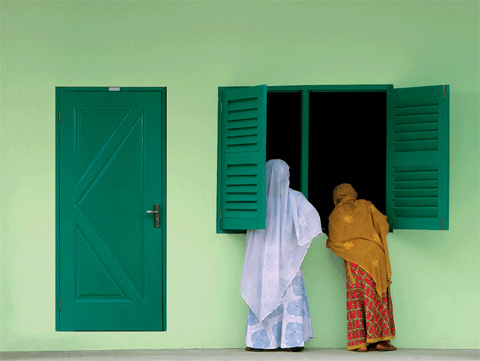 For many years, the village of Brekumanso had a small school made of bamboo, mud and tin where students crowded into open class­rooms. Thanks to a grant, a new, larger school has been built. Here, on the day of the new school’s dedication, two women gaze into a classroom window. Are they wishing they could have attended school when they were girls? Perhaps they are thinking of the bright futures of their children who will attend classes in this brand new school.
Photo © 2010 Marian Ruge
Peace Corps Volunteer
Ghana 2008-2010

I Was Never Here and This Never Happened
by Dorinda Hafner

Book Description
Ghana native Hafner, host of A Taste of Africa, a cooking program on Australian television, mixes recipes, stories from her homeland and personal anecdotes in this eclectic 1996 memoir.

Kofi and His Magic
by Maya Angelou