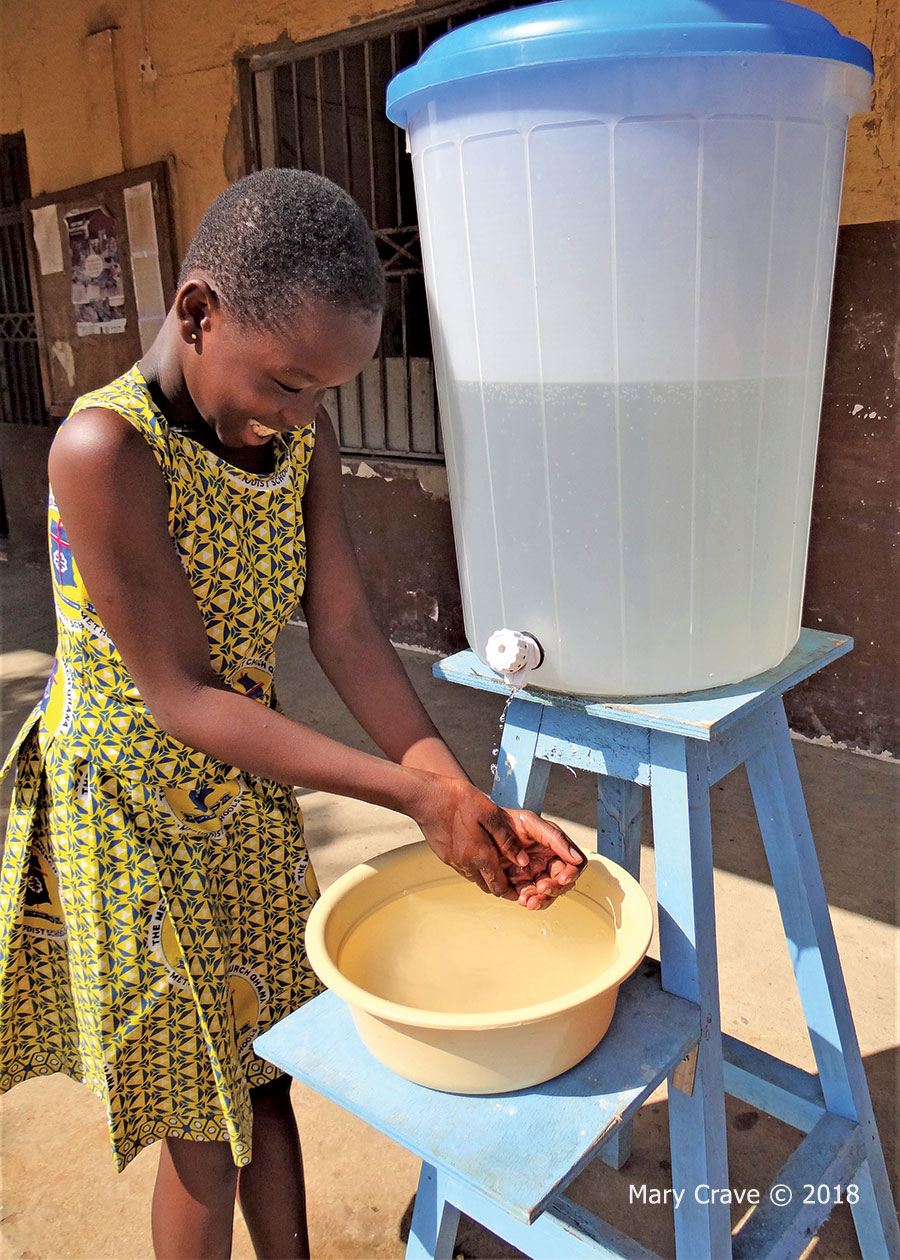 Schools teach proper handwashing at all grade levels in Ghana, and the practice was reinforced even more during the COVID pandemic. Collecting water for portable wash stations and cleaning is one of the everyday maintenance chores that all students do. Some water sources are nearby, while others are a 10- to 20-minute walk to and from the school, and not easy. Plastic trash cans fitted with taps are affordable solutions for easy washing before eating or after using the latrine. 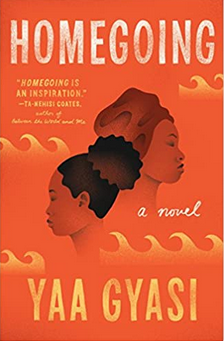 Homegoing: A Novel
By Yaa Gyasi

Summary:
Tracing up to the present day two strikingly dissimilar branches of a family rooted in 18th -century West Africa, this novel has been hailed as both a Ghanaian and an African-American epic. Two half-sisters, born in different villages—one Fante, the other Asante--and unknown to each other, face cruelly divergent fates: one is abducted, endures the Middle Passage, and is enslaved on a plantation in the American South; the other weds a British colonial and enjoys a life of privilege. The lives of these foremothers determine those of their descendants: slavery, the Civil War, toil and struggle, the Great Migration, 20th-century Harlem for one family branch; for the other, comfort, education abroad, and positions of influence in both the British- administered Gold Coast and independent Ghana, but also migration, disconnection and loss.

"Homegoing is an inspiration." (Ta-Nehisi Coates) 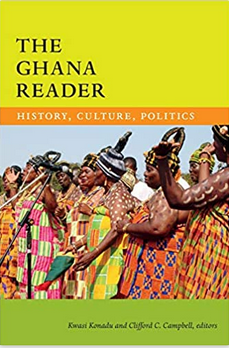 Summary:
This edited volume draws from a wide range of texts--historical documents, poems, treaties, articles, and fiction--to present key moments from more than 500 years of Ghana’s history. Casting light on the many intersecting histories of the country’s development as a nation, the selections show clearly that the path to understanding Ghana requires acknowledging its ethnic and cultural diversity and listening to its population's varied voices.

"... The Ghana Reader's rare documents and publications are indispensable to the understanding of Ghana's historical, cultural, and political narrative.... The Ghana Reader is a treasure trove of information." (Kwaku Nti, Journal of Global South Studies)

"[A] wonderful introduction to Ghana and its people, stretching all the way back to prehistoric times.” (Nicolas van de Walle, Foreign Affairs)

"A celebration of the dynamism, complexity, and allure of Ghana. . . .” (Jacqueline Ignatova, African and Black Diaspora) 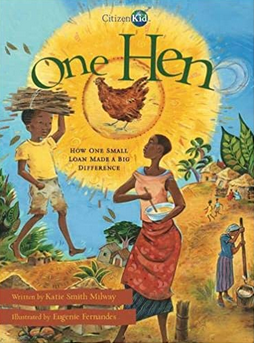 One Hen: How One Small Loan Made a Big Difference (CitizenKid Series)
By Katie Smith Milwy, Eurgenie Fernandes, illus.

Summary:
Inspired by true events, One Hen tells the story of Kojo, a boy from Ghana who turns a small loan into a thriving farm and a livelihood for many. After his father died, Kojo had to quit school to help his mother collect firewood to sell at the market. When his mother receives a loan from some village families, she gives a little money to her son. With this tiny loan, Kojo buys a hen.

A year later, Kojo has built up a flock of 25 hens. With his earnings Kojo is able to return to school. Soon Kojo's farm grows to become the largest in the region. Kojo's story is inspired by the life of Kwabena Darko, who as a boy started a tiny poultry farm just like Kojo's, which later grew to be the largest in Ghana, and one of the largest in west Africa. Kwabena also started a trust that gives out small loans to people who cannot get a loan from a bank. One Hen shows what happens when a little help makes a big difference.

The final pages of One Hen explain the microloan system and include a list of relevant organizations for children to explore. One Hen is part of CitizenKid: A collection of books that inform children about the world and inspire them to be better global citizens.

The text and visuals work individually and together to create a compelling story that is simple without being simplistic and that avoids patronizing attitudes ... the book accomplishes the rare feat of entertaining and educating ... likely to be a hit with both kids and teachers. ―Quill & Quire, Starred Review

The vibrant folkish art by Eugenie Fernandes bursts with color and texture and enhances this uplifting tale of the power of giving someone a chance. ―Detroit Free Press ... the beneficial effects of small loans and small projects are thoughtfully and carefully explained in the extensive text ... Acrylic illustrations are vivid and lively ...―Bulletin of the Center for Children's Books 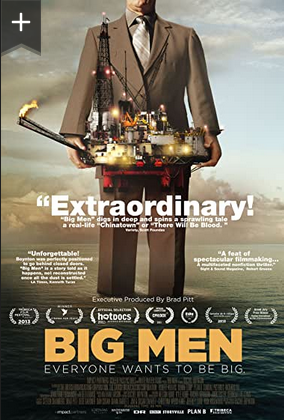 Summary:
The film's central story follows a small group of American explorers at Dallas-based oil company Kosmos Energy. Between 2007 and 2011, with unprecedented, independent access, Big Men's two-person crew filmed inside the oil company as Kosmos and its partners discovered and developed the first commercial oil field in Ghana's history. Simultaneously the crew filmed in the swamps of Nigeria's Niger Delta, following the exploits of a militant gang to reveal another side of the economy of oil: people trying to profit in any way possible, because they've given up on waiting for the money to trickle down. So what happens when a group of hungry people discover a massive and exquisitely rare pot of gold in one of the poorest places on earth?

REVIEWS:
....Tagging neither heroes nor villains, Ms. Boynton wonders instead who benefits from, and who is harmed by, the billions of dollars in play. Should the enormous risks and staggering costs of getting to “first oil” guarantee its finder — in this case, a small Texas start-up called Kosmos Energy — a sweetheart deal from the Ghanaian government? —Jeanette Catsoulis, NYTimes
https://www.nytimes.com/2014/03/14/movies/big-men-looks-at-ghanaian-oil-discovery.htm

“‘Big Men’ provides a compelling account of the murky waters of corporate engagement with the state in Africa. Looking specifically at the case of Ghana and Nigeria, this documentary provides veritable insight into how corporate greed, state insensitivity to the needs of the people continue to define relationships within extractive enclaves of Africa. As the documentary shows, oil and the politics of it would continue to shape relationships in spaces of extraction such as Nigeria and Ghana for a long time to come.” Omolade Adunbi PhD, Assistant Professor in Department of Afroamerican and African Studies, Faculty Associate in Program in the Environment, University of Michigan

“There aren’t many people who can see what New York financiers, Nigerian rebels, Texas oilmen, and Ghanaian politicians have in common, and few film-makers could weave a story to make the connections for the rest of us. Rachel Boynton does just that in “Big Men” — a visually arresting and intellectually probing investigation.” Professor J.S. Maloy, Kaliste Saloom Endowed Chair in Political Science, University of Louisiana Lafayette

“No single resource is more essential to modern life than oil, and no film offers a more incisive look at how the enormous wealth oil creates subverts the morality of individuals, corporations, even entire countries than Rachel Boynton’s compelling documentary ‘Big Men’.” Kenneth Turan, L.A. Times

“If you want to know how the world works, as opposed to how we are told it works – or how we wish it might work – you need to see ‘Big Men,’ a remarkable new investigative documentary about oil, money, Africa and America that comes with Brad Pitt’s name attached as executive producer but was directed by Rachel Boynton.” Andrew O’Hehir, Salon.com

“There are three categories of schemers in ‘Big Men,’ Rachel Boynton’s illuminating documentary about the oil business in West Africa: businessmen, politicians and bandits. Sometimes, though, it’s hard to tell the types apart.” Mark Jenkins, NPR

“Here’s the rare current-affairs documentary that doesn’t just show us something gone wrong in some part of our world. Rachel Boynton’s first-rate ‘Big Men’ instead peels the skin off the world itself, revealing the gears as they grind away, casting familiar doc scenarios in shades of illuminating gray: The heroes and villains in global business aren’t always easy to suss out, but it’s never hard to spot the victims.” Alan Scherstuhl, Village Voice

“Boynton pulls the thread and unravels a tale that gives fair balance to all sides of the equation, while asking a much bigger question about whether or not true human nature is guided by self-preservation (read: greed) or if people can truly act in the greater good. And the answers are surprising.” Kevin Jagernauth, The Playlist

“Like a number of recent hot-button docus, from ‘Crude’ to ‘Inside Job,’ Rachel Boynton’s extraordinary ‘Big Men’ should come tagged with a warning: The side effects of global capitalism may include dizziness, nausea and seething outrage. Using razor-sharp journalistic skill to untangle the knotty saga of an American petroleum company’s entrance into the West African republic of Ghana, Boynton’s film also poses a series of troubling philosophical questions: Is unchecked greed an intrinsic part of the human character? Is ‘the greater good’ ever more than a convenient euphemism where big business and big government are concerned? Wide fest exposure and ancillary sales seem assured for this Tribeca world premiere, which also richly deserves a theatrical pickup.” Scott Foundas, Variety