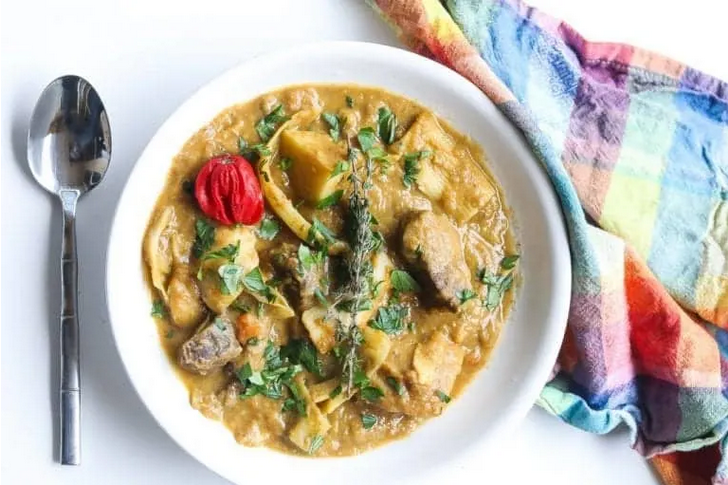 Soup joumou (/dʒuːmuː/; French: soupe au giraumon) is a soup native to Haitian cuisine. In 2021, soup joumou was added to the UNESCO Intangible Cultural Heritage List. The soup is traditionally cooked with winter squashes such as the turban squash.

Haitian pumpkin soup is traditionally served on New Year's Day as a celebratory reminder of Haiti's hard-won liberation from slavery and independence from France. The soup was once a delicacy reserved only for white masters, while the slaves who prepared it were forbidden to eat it, but ever since January 1, 1804 — the day when Haitian revolutionary leader Jean-Jacques Dessalines declared Haiti’s independence— joumou has become a symbol of liberty that graces every Haitian's table on the first of every January.

Apart from pumpkin or squash, the thick, savory joumou is loaded with various other vegetables, beef, and flavorings such as thyme, parsley, and chili peppers.

Enslaved Haitians were not allowed to have this delicious and aromatic pumpkin soup, a favorite of the French who held people in slavery. On Sunday, January 1, 1804, when the enslaved gained their freedom, they celebrated with music and food in the Place d’Armes, in the city of Gonaives. And what better way to celebrate than to eat the very thing they were unable to eat under slavery? Nowadays it doesn’t matter where in the world a Haitian might be on January 1—they will be having the soup of freedom.

INSTRUCTIONS:
1. Pour 1 cup vinegar into a large bowl. Swish beef shank and stew beef in vinegar to rinse. Transfer beef to a colander and rinse with water.
2. Stir Epis Seasoning Base, lime juice, and seasoned salt in another large bowl. Add beef, toss to coat, and let marinate at least 30 minutes, preferably overnight.
3. Heat 5 cups broth in very large stock pot over medium. Add marinated beef and bones, cover, and simmer until meat is beginning to soften, about 40 minutes.
4. Add squash to pot on top of beef, cover, and return to a simmer. Cook until squash is fork-tender, 20–25 minutes. Using tongs or a slotted spoon, transfer squash to a blender. Add 4 cups broth and purée until smooth. Return to pot and bring to a simmer.
5. Add potatoes, carrots, cabbage, onion, celery, leek, turnips, chile, rigatoni, cloves, garlic powder, onion powder, 2½ tsp. salt, ½ tsp. pepper, a pinch of cayenne, parsley, if using, thyme, if using, and remaining 6 cups broth. Simmer, uncovered, until pasta and vegetables are tender, 30–35 minutes.
6. Add oil, butter, and remaining 1 Tbsp. vinegar. Reduce heat to medium-low and simmer until beef is very tender, 15–20 minutes more.
7. Taste and adjust seasonings. Divide soup among bowls and serve with bread alongside.
DO AHEAD:
8. Soup can be made 3 days ahead; cover and chill, or freeze up to 3 months.

Cook’s Note: This soup feeds a large crowd. If you have a smaller crew or smaller pot, feel free to halve the ingredients. You might need to add extra liquid while cooking.