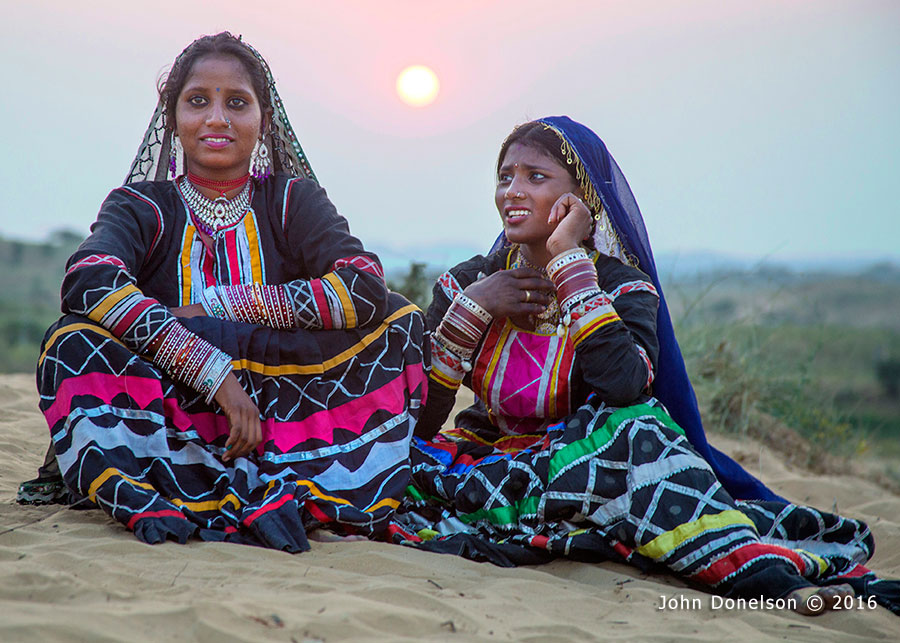 Beautifully embroidered and embellished costumes are a hallmark of the Kalbelia nomads of India’s desert state of Rajasthan. In former times, the Kalbelia and other nomads provided musical and dancing entertainment for royalty. Today they still travel to fairs and festivals, where they perform and participate in folk dances and other celebrations.
– John Donelson ©2016
PCV Ghana 1965–1966
Secondary School Math & Science Teacher 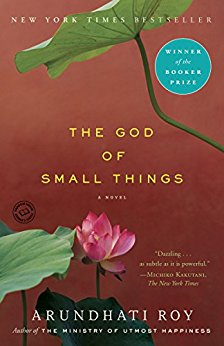 "They all crossed into forbidden territory. They all tampered with the laws that lay down who should be loved and how. And how much."

The year is 1969. In the state of Kerala, on the southernmost tip of India, fraternal twins Esthappen and Rahel fashion a childhood for themselves in the shade of the wreck that is their family. Their lonely, lovely mother, Ammu (who loves by night the man her children love by day), fled an abusive marriage to live with their blind grandmother, Mammachi (who plays Handel on her violin), their beloved uncle Chacko (Rhodes scholar, pickle baron, radical Marxist, bottom-pincher), and their enemy, Baby Kochamma (ex-nun and incumbent grandaunt). When Chacko's English ex-wife brings their daughter for a Christmas visit, the twins learn that things can change in a day, that lives can twist into new, ugly shapes, even cease forever, beside their river...

Amazon.com Review
In her first novel, award-winning Indian screenwriter Arundhati Roy conjures a whoosh of wordplay that rises from the pages like a brilliant jazz improvisation. The God of Small Things is nominally the story of young twins Rahel and Estha and the rest of their family, but the book feels like a million stories spinning out indefinitely; it is the product of a genius child-mind that takes everything in and transforms it in an alchemy of poetry. The God of Small Things is at once exotic and familiar to the Western reader, written in an English that's completely new and invigorated by the Asian Indian influences of culture and language.

--This text refers to an alternate Paperback edition.

From Publishers Weekly
With sensuous prose, a dreamlike style infused with breathtakingly beautiful images and keen insight into human nature, Roy's debut novel charts fresh territory in the genre of magical, prismatic literature. Set in Kerala, India, during the late 1960s when Communism rattled the age-old caste system, the story begins with the funeral of young Sophie Mol, the cousin of the novel's protagonists, Rahel and her fraternal twin brother, Estha. In a circuitous and suspenseful narrative, Roy reveals the family tensions that led to the twins' behavior on the fateful night that Sophie drowned. Beneath the drama of a family tragedy lies a background of local politics, social taboos and the tide of history—all of which come together in a slip of fate, after which a family is irreparably shattered. Roy captures the children's candid observations but clouded understanding of adults' complex emotional lives. Rahel notices that "at times like these, only the Small Things are ever said. The Big Things lurk unsaid inside." Plangent with a sad wisdom, the children's view is never oversimplified, and the adult characters reveal their frailties—and in one case, a repulsively evil power—in subtle and complex ways. While Roy's powers of description are formidable, she sometimes succumbs to overwriting, forcing every minute detail to symbolize something bigger, and the pace of the story slows. But these lapses are few, and her powers coalesce magnificently in the book's second half. Roy's clarity of vision is remarkable, her voice original, her story beautifully constructed and masterfully told. First serial to Granta; foreign rights sold in France, Spain, Portugal, Germany, Italy, Finland, Norway, Sweden, Denmark, Estonia, Holland, India, Greece, Canada and the U.K.

A poignant and delightful story involving class, race, social customs, and a unique friendship that questions them all.

Though they’re divided by class, language, appearance—you name it—Chloe and Lakshmi have a lot in common. Both girls are new to Class Five at Premium Academy in New Delhi, India, and neither seems to fit in. But they soon discover how extraordinary an ordinary friendship can be and how celebrating our individuality can change the world.

"Whether describing the heat of a Delhi summer or the emotions of a homesick preteen in a strange land, Darnton gets the details right, bringing characters and story to life and also educating readers about the economic discrepancies rampant in India. Blonde American Chloe's perspective gives Western readers a way into this tale of inequality in a foreign culture." —Kirkus

"The heart of the story—standing up for others, despite social or economic class—can offer a good discussion for readers and hopefully get them thinking about those around them." —Booklist

"An informed and informative work of fiction that incorporates eye- opening facts about poverty and social systems outside of the United States while never losing the protagonist’s authentic and relatable voice. Evocative in setting, sympathetic in character, and noble in intent, this story is for armchair travelers and seekers of fairness and friendship." —The Bulletin

Summary:
“A mistaken delivery in Mumbai's famously efficient lunchbox delivery system connects a young housewife to an older man in the dusk of his life as they build a fantasy world together through notes in the lunchbox.” – IMDb