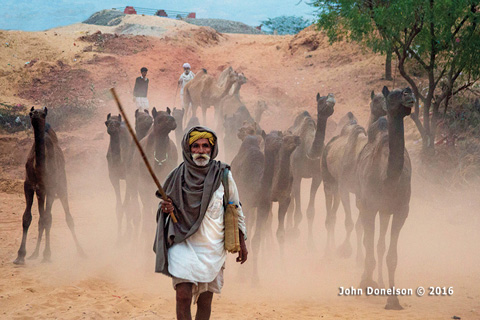 Leading his camels to the annual Pushkar Mela, or fair, that draws vendors, visitors, and religious participants from all over India’s desert state of Rajasthan, this herder is headed for the fair’s camel shows and livestock market. Several thousand camels and other animals are bought, sold, and traded during this five-day event, which takes place during the full moon of late October or early November. Camel herders, musicians and dancers, and other visitors are joined by Hindu pilgrims who come to take a holy dip in Pushkar Lake under the full moon to wash away sins and seek salvation.
– John Donelson ©2016
PCV Ghana 1965–21966
Secondary School Math & Science Teacher 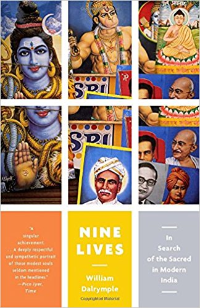 Nine Lives: In Search of the Sacred in Modern India
William Dalrymple, 2011

Summary:
“…an enlightening book that explores with remarkable compassion and expansive insight nine varieties of religious devotion in India today.

In portraits of people we might otherwise never know William Dalrymple distills his twenty-five years of travel in India to explore the challenges faced by practitioners of traditional forms of faith in contemporary India. For two months a year, a man in Kerala divides his time between jobs as a prison warden and a well-builder and his calling as an incarnate deity. A temple prostitute watches her two daughters die from AIDS after entering a trade she regards as a sacred calling. A Jain nun recalls the pain of watching her closest friend ritually starve herself to death.

Together, these tales reveal the resilience of individuals in the face of the relentless onslaught of modernity, the enduring legacy of tradition, and the hope and honor that can be found even in the most unlikely places.”

Editorial Reviews:
From Publishers Weekly
Starred Review. Historian-travel writer Dalrymple (The Last Mughal) knows his Asian subcontinent, having moved to New Delhi in 1989. The engine of Indian economic development is bringing rapid change, and Dalrymple spotlights changes and constancies brought about in India’s dizzyingly diverse religious practices. The titular nine lives are those of a variety of religious adherents: a Jain nun, a sacred dancer, a Sufi mystic, a Tantric practitioner, among others. His subjects, for the most part, do their own show-and-tell in explaining their religious paths, which differ but share the passionate devotion (bhakti) that characterizes popular religion in India. Dalrymple has a good eye, a better ear, and the humility to get out of the way of his subjects. It helps to know a bit about the subject coming in, as it saves endless flipping to a very helpful appended glossary. The author also notes in his introduction he has made a special effort to avoid exoticizing “mystic India,” yet he has picked some extremes to exemplify different kinds of religious beliefs and practices. Still, those are minor quibbles about this ambitious and affectionate book that respects popular religion.
Copyright © Reed Business Information, a division of Reed Elsevier Inc. All rights reserved.

From Booklist
Dalrymple, author of prizewinning works of far-roaming inquiry, including The Last Mughal (2007), knows when to let others speak. Which is what he does with great finesse in this evocative set of portraits of nine spiritual seekers living across India. Nine lives that open doors onto nine of India's many arduous paths to the divine and reveal striking, nearly surreal juxtapositions between the old and the new. There's the haunting tale of a Jain nun who as a girl renounced her life of privilege and the wrenching story of Rani Bai, a devadasi, or servant of the goddess Yellamma, who was forced into prostitution as a girl. Hari Das describes what it feels like “to be taken over by a god” when he performs theyyam, the sacred possession dance of Kerala, only to return to his dangerous work as a prison guard. Dalrymple sets each vivid profile within an intricately drawn history of the ancient and now-endangered tradition each devotee is dedicated to preserving in the escalating battle between holiness and hustle that is transforming India.
--Donna Seaman 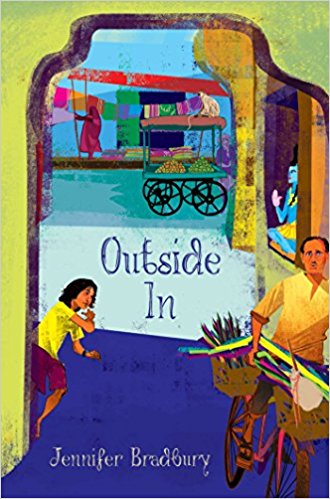 Outside In
By Jennifer Bradbury

A twelve-year-old boy living on the streets of Chandigarh, India, stumbles across a secret garden full of sculptures and sees the possibility of another way of life as he bonds with the man who created them in this novel based on the true story of Nek Chand, one of India’s most beloved artists.

Summary (IMDB): Janardhan a 28 year old Kannada Lecturer from Mangalore who is quite an introvert comes to know from an astrologer that he would attain sanyasa (embrace asceticism) if he doesn't get married within a year. Hearing this Janardhan is now in a situation of trouble & desperation as he has never had a decent conversation with females until now in his life & all the proposals his family has seen also has gone in vain as he doesn't look great, physically. Janardhan continues his search for a beautiful bride. In this journey he faces various situations & conflicts which in turn gives him a chance to revisit his inner core & experience his self-discovery. Does Janardhan find his bride or does he attain spiritual path? These questions form the rest of the story.