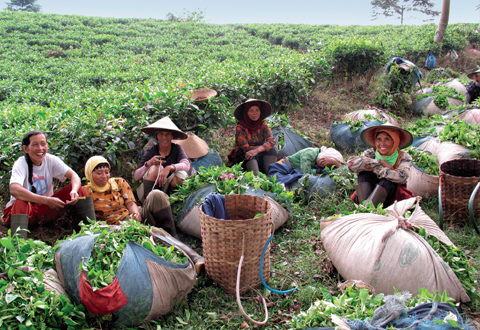 “Plucking” tea leaves refers to the harvesting of those leaves growing above the flat top of the tea bush—known asthe plucking table.Here, women rest after a long day of plucking, a livelihood requiring both skill and speed. The women are generally paid by the weight of the leaves they have picked, so the ability towork quickly isessential. The Indonesian tea business was started in the 18th century by the Dutch. The volcanic soil and tropical climate made Java perfect for growing tea. Thanks to women like these, Indonesiais now the world’sfifth largest teaproducer.
Photo © 2010 John Schilling

Lang(s) Bahasa Indonesia (OFFICIAL) (modified form of Malay), English, Dutch, local dialects of which the most widely spoken is Javanese

Surviving Against the Odds
by S. Ann Dunham

Book Description
Subtitled Village Industry in Indonesia and published in 2009, Surviving Against the Odds is based on the 14 years of doctoral dissertation research Dunham, President Obama's late mother, gathered among rural metal workers on the island of Java.

Gift Of the Crocodile: a Cinderella story
by Judy Sierra