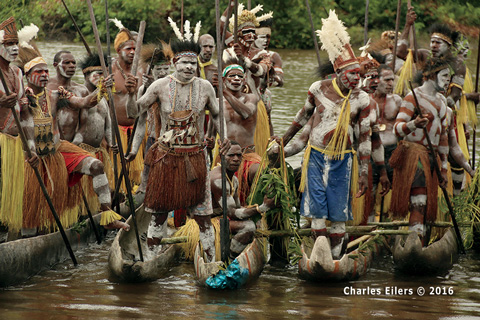 In a ceremony honoring their Asmat ancestors, Owus villagers dressed as warriors of old beat their oars on their dugout canoes to the singing and drumbeats of the rest of the village. On shore, the villagers raise a tall carved ancestors’ pole, called a bis, and decorate the clan longhouse with strips of fresh sago palm leaves to welcome and honor the ancestors’ spirits. In the swampy forests of southern Papua, the homes and longhouse of Owus village are built on pilings as protection from tidal flooding.
– Charles Eilers © 2016
PCV Nigeria and Ethiopia 1966–1969
Teacher Training 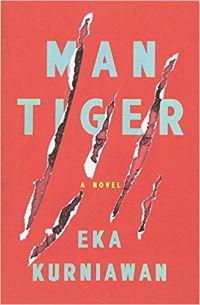 Summary:
A wry, affecting tale set in a small town on the Indonesian coast, Man Tiger tells the story of two interlinked and tormented families and of Margio, a young man ordinary in all particulars except that he conceals within himself a supernatural female white tiger. The inequities and betrayals of family life coalesce around and torment this magical being. An explosive act of violence follows, and its mysterious cause is unraveled as events progress toward a heartbreaking revelation.
Lyrical and bawdy, experimental and political, this extraordinary novel announces the arrival of a powerful new voice on the global literary stage.
A longlist nominee for the Man Booker International Prize.

About the Author and Translator
Author Eka Kurniawan was born in Tasikmalaya, Indonesia in 1975. He studied philosophy at Gadjah Mada University, Yogyakarta. He has published several novels, including Beauty Is a Wound and Man Tiger, as well as short stories. His novels have been published in a number of languages, including English.
Labodalih Sembiring (translator) is a freelance features reporter for English-language publications, a writer of fiction in English and Indonesian, an amateur photographer, and a landscape designer.

Editorial Reviews
“Against the killings of those years and the collective amnesia used to blank out the fate of [Indonesia’s] victims—a kind of second death, as it were—Kurniawan’s fiction summons its legions of ghosts. Against the strongmen who presided over violence and abuse, it raises the dead Dewi Ayu and brings to life a magic tigress hungry for justice.”

“Tight, focused and thrilling. Like a good crime novel, Man Tiger works best when read in a single sitting, and its propulsive suspense is all the more remarkable because Kurniawan reveals both victim and murderer in the first sentence.”

“Without a doubt the most original, imaginatively profound, and elegant writer of fiction in Indonesia today: its brightest and most unexpected meteorite.”

“The world Kurniawan invents is familiar and unexpected, incorporating mystery, magical realism, and folklore … Biting and beautiful … This wild and enthralling novel manages to entertain while offering readers insight into the traditions of a little-known South East Asian culture. Kurniawan has officially put the West on notice.

“What good fortune that English-speaking readers may now find ourselves enchanted, confronted, and perhaps transformed by Kurniawan’s work.”

“[Kurniawan] seems destined to join the ranks of our great storytellers like Salman Rushdie and Gabriel García Márquez.” 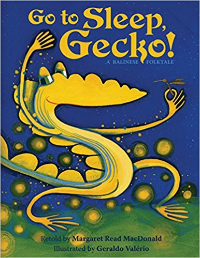 Retells the folktale of the gecko who complains to the village chief that the fireflies keep him awake at night but then learns that in nature all things are connected.

Summary (IMDB): This is a story about the most famous Indonesian heroine, Kartini. In the early 1900s, Indonesia was still a colony of the Netherlands, Java is a land where noble families rule under Dutch supervision. Only noble and royal family were able to get education. Women weren't allowed to get higher education, even women of royal blood. Women in the Javanese culture only had one purpose: to be a bride for a man with royal blood. Kartini grew up to fight this caste system, fight for equality for women, and most importantly, she fought for the right for everyone to get an education regardless of their social status or gender. This is an emotional journey of Kartini where she has to defy her own family and her own culture—and she has to fight to change rules and traditions that are considered sacred in Java.