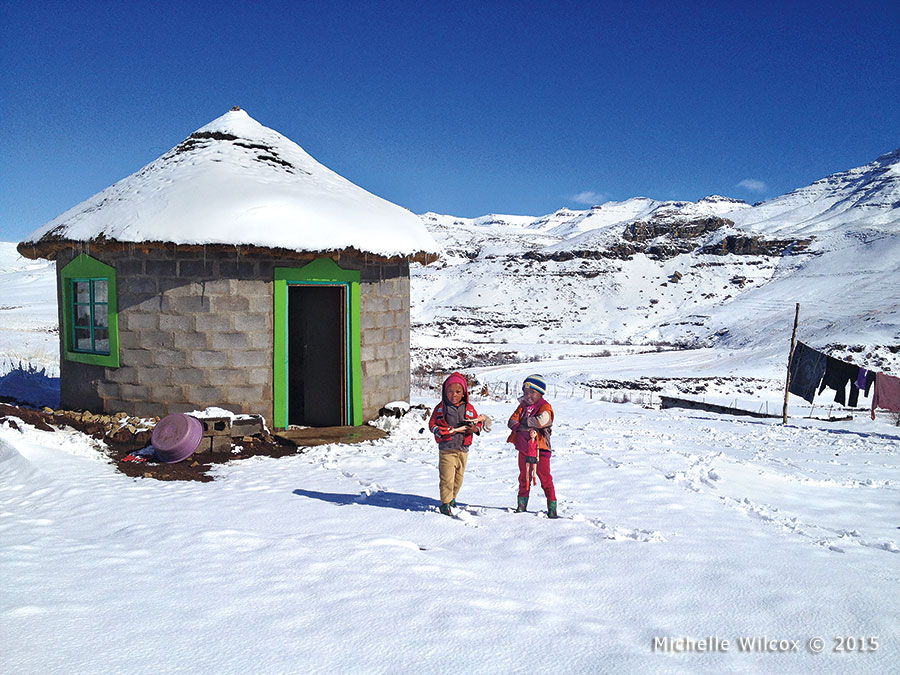 On an unexpectedly snowy day too cold for school, some of the Mavuka village kids bring their dolls outside—but only after having taken advantage of the lingering snow to throw some snowballs. Lesotho’s winter runs from May to September, but the highlands experience occasionally heavy snowfall even in the summer months of November and December. Due to the intense sun at this altitude, it is a rare treat when snow in the Drakensberg Range lasts a whole day, especially during spring and summer.
– Michelle Wilcox ©2015
PCV Lesotho 2013–2015
Education 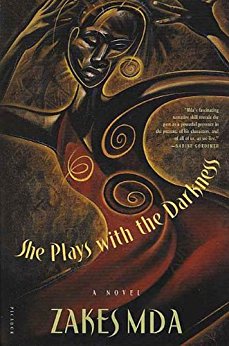 In a remote mountain village in Lesotho, the beautiful Dikosha lives for dancing and for song, setting herself apart from her fellow villagers. Her twin brother, Radisene, works in the lowland capital of Maseru, struggling amid political upheaval to find a life for himself away from the hills. As the years pass, Radisene's fortunes rise and fall in the city, while Dikosha remains in the village, never leaving and never aging. And through it all, the community watches, comments, and passes judgment.

From Booklist
Like all Mda's novels, including Heart of Redness (2002), this contemporary story of southern Africa places contemporary politics in the context of family and community, past and present. The setting here is a mountain village in Lesotho, on the South African border. Radisene is close to his beloved sister, Dikosha, until he leaves for the capital city, Maseru, where be becomes a smart ambulance-chaser, so successful in his machinations that he even sends money back to the village to build his mother a mansion. Dikosha refuses to have anything to do with him. In fact, she lives in her own world of magic and music, closely in touch with the dancers in the local cave paintings that were created by the Bushmen long before the Sotho came there and took the land. Mda's blend of magical realism and the cruel farce of national politics reveals the wildness everywhere. At the heart of the story is the mountain community, never idyllic, bursting with jealousy and spite, yet home through drought, snow, and mist.

Review
“Mda's fascinating narrative skill reveals the past as a powerful presence in the present: of his characters, and of all of us, as we live.”

Within this little volume you will find 10 unique folk tales and children's stories from the African mountain Kingdom of Lesotho: The story of Takane, who, despite having an arranged marriage, became a happy and devoted wife. The tale of how Khosi chooses Polomahache (Crocodile Child) to be his wife and of Mokete and Morongoe the Snake, and many more.

Included are stories of the Sun Chief, evil Witchdoctors, or Ngaka, the equivalent of an Evil Wizard, spells being cast and broken and beautiful maidens being set free. There are also tales of malevolent chiefs who rule their people with a fist of iron, not caring how much innocent blood they shed - and how their comeuppance is delivered by the hero of the day.

These tales were collected by Minnie Martin, wife of a Government Official, who came to South Africa and Basutoland, from England, in 1891. To enable a better understanding of the people and their customs, she began to study the language, collected these tales and became fairly fluent in the language.

Because the Bantu peoples of Southern Africa had no written language, it must be noted that the first people to record the various languages (the Boers and the British) did so phonetically, writing the language as they heard it being spoken. Unlike most European languages, there has been no influence of Latin, Greek, or Arabic, which makes the learning of those languages that little more difficult. Here you speak the word the way it is written e.g. Ngaka is read as In-gaa-kah, Takane as Tak-aan-eh, Khosi as Koh-see, etc. Enjoy this unique collection of tales, customs, and lore from a little-known place, unseen or heard in the West for many generations. 33% of the net profit will be donated to SENTEBALE - a charity supporting children in Lesotho orphaned by AIDS.

Summary:
A young man reluctantly embarks on a journey to bury his estranged father in the remote mountain village where he was born. He finds himself drawn to both the mystical beauty and hardships of the people of the land he had forgotten.

Famo is a type of music from Lesotho in Africa consisting of singing accompanied by the accordion, a drum and occasionally a bass. It originated in the drinking dens of migrant workers from Lesotho trying to relax after working in the mines in the 1920s but is now a popular form of music for Sesotho speakers.

As a popular form of music in Lesotho, famo consists of male or female singing and ululations. Instrumental support comes from an accordion, a drum and a bass. Songs often refer to urban life, and female singers can use their singing to challenge their male counterparts.

In the late 1960s the first major recording artists to make a living from famo were Tau ea Matšekha (Lion of Matšekha, Matšekheng/Habo Matšekha is an area in Northern Lesotho) made up of Forere Motloheloa (accordionist) and Apollo Ntabanyane (vocalist/composer).

Tau Ea Matsekha’s Ke Ikhethetse E Motle (which was the basis of Paul Simon's “Boy in the Bubble”).