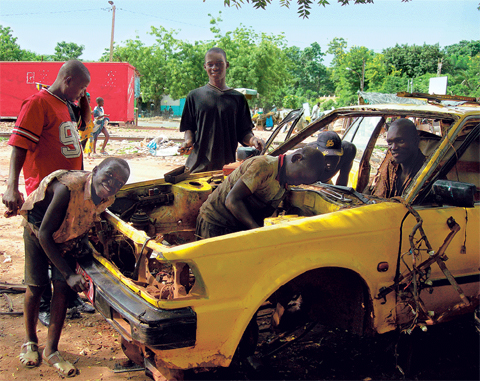 When it comes to fixing something in Mali, everyone dives right in – regardless of age. Here in the capital, Bamako, young men and boys transform the shell of a yellow car into a working taxi again. Their workplace is as lively as their work style – open-aired, free, full of laughter. Music blares from a nearby radio as city traffic roars in the background. The taxi, once repaired, will again travel the streets of Bamako, adding to the cacophony of trucks, cars, motorbikes, and donkey carts. Such, of course, is city life. Here, though, at this moment, it is the sound of laughter that catches the ear.
Photo © 1983 Ahn Ly

Monique and the Mango Rain: two years with a Midwife in Mali
by Kris Holloway and John Bidwell

Book Description
Published in 2007, this memoir tells the story of Holloway's experiences as a Peace Corps volunteer in a small village in Mali in the early 1990s, and her friendship with a local midwife Monique Dembele.

Mansa Musa: the lion of Mali
by Khephra Burns

Ali Farke Toure & Toumani Diabaté: In the heart of the moon (7:29 min)