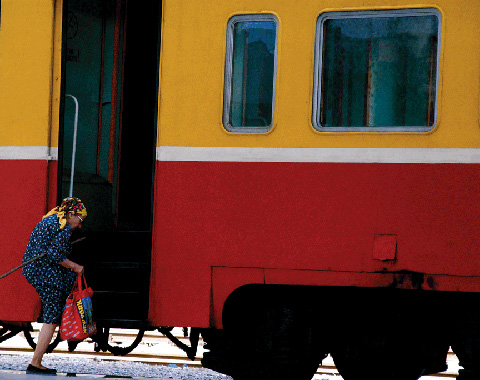 The afternoon silence is torn by the rolling thunder of wheel on rail as the train trundles into the station in Chisinau, Moldova, the capital of Europe’s poorest country. The locomotive chokes to a stop, towering over the central platform. Patient, a woman waits as the hiss of the diesel engine fades to silence and stillness reclaims the afternoon. Deliberate, she stands and walks purposefully to the train’s door. Slow. Steady. She grabs the handrail, steps up, and boards the train. All are aboard, waiting to depart.
– Leo D. Redmond ©2009
Peace Corps Volunteer (Agroforestry/Food), Paraguay 2002-04, Panama 2006, Guatemala 2008

Lost Province: Adventures in a Moldovan Family
by Stephen Henighan

Book Description
One of the best travelogues about Moldova, it follows a Canadian’s experiences teaching English in this forgotten country and is humorous and touching while bringing up astute, even disturbing points about Soviet cultural colonization and the inter-ethnic tension he finds there.