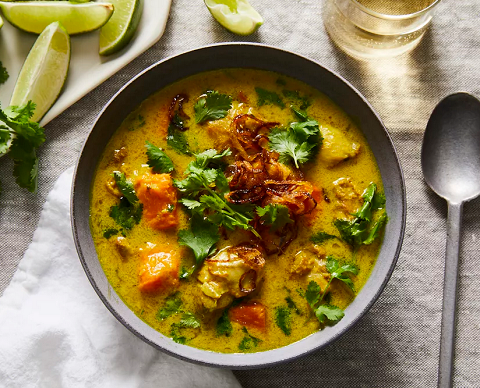 INSTRUCTIONS:
For the soup
1. Cut the chicken thighs into about 1-inch pieces and marinate overnight with the dried ginger, turmeric, coriander, and 1 tablespoon of neutral oil. I like the overnight marinade, but if you forget, simply toss the chicken pieces with the spices before you start cooking.
2. In a food processor, mince the garlic, ginger, shallot, dried chile, and the roots and/or stems of the bunch of cilantro.
3. In the bottom of a heavy-bottomed pan over medium-high heat, heat the coconut oil. Then add the cubed sweet potato. Fry until golden brown on at least 2 sides of each cube. Scoop out of the pan, leaving the oil, and set aside. Add the chicken pieces (a few at a time so you can brown them without having them cool the pan down) and let them begin to brown. Season with a pinch of salt. When they are mostly browned, add the minced shallot-ginger-garlic-cilantro stem mixture and let cook out a little. Add a couple tablespoons of the chicken stock and let reduce until the mixture is soft and cooked. Add the rest of the chicken stock and the reserved sweet potatoes and bring to a simmer.
4. Meanwhile use the method below to fry the crispy shallots (this can also be done as much as a week ahead of time, as the shallots will keep in a closed container at room temperature for a week at least).
5. FSimmer the soup for about half an hour, until the chicken and sweet potatoes are close to tender. Stir in the fish sauce, lime juice, and coconut milk and bring up to a simmer. Stir in a quarter cup of cilantro leaves and taste for salt. Serve garnished with the crispy shallots, a couple of sprigs of raw cilantro, and the lime wedges.

For the crispy shallot topping
1. In a sauté pan over medium heat, heat the oil. Add the shallots and stir frequently. As the oil continues to heat, the shallots will start to color. When they get to golden brown, scoop them out of the oil and drain on a paper towel. You want to pull them out of the oil a little before dark brown, as they'll continue to cook and crisp up on the paper towel.