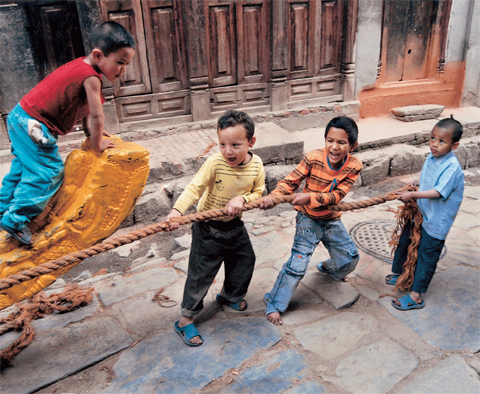 Participation in religious festivals is an integral part of growing up in the Kathmandu Valley. In several of the great festivals grand wooden chariots are pulled through the medieval cities. In the Bisket Jatra festival in Bhaktapur there are two chariots, one for the adults and one for the youngsters. Here, young boys practice for the big day. One boy stands on the chariot’s front end as the others prepare to show off their strength. They have this one chance each year and they make the most of it. They are learning to carry on a centuries-old tradition, and they have great fun as well.
Photo © 2009 Scott Faiia

Among Flowers
by Jamaica Kincaid

Book Description
In this 2005 travel narrative, subtitled A Walk in the Himalaya, noted novelist and avid gardener Kincaid, a Caribbean native, traverses Nepal providing descriptions of the flora and fauna of the countryside, and giving insights into the culture and history of the Nepalese people.

The Snow Leopard
by Theresa Radcliffe