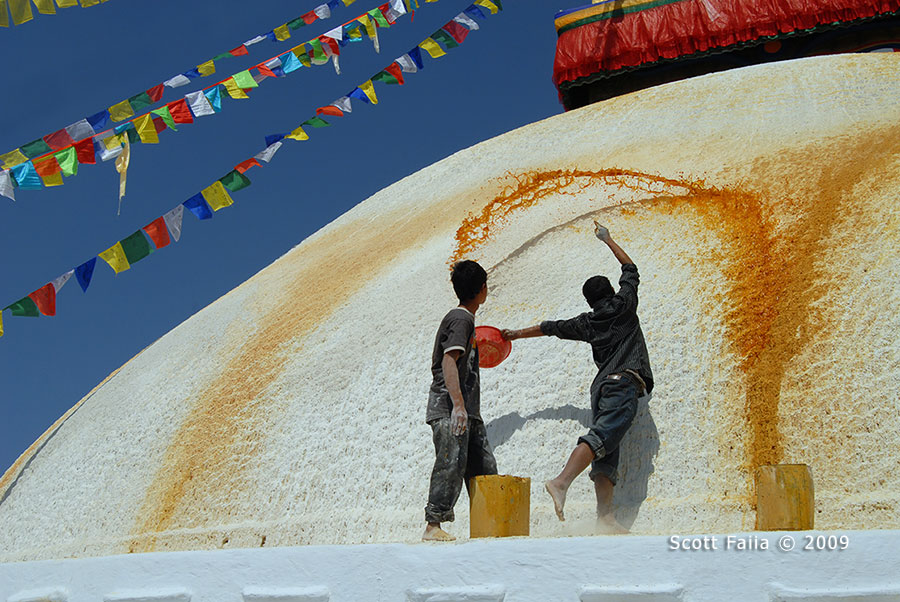 In the Kathmandu Valley of Nepal, the Losar Festival celebrating Tibetan New Year ends with the great Boudhanath stupa receiving a fresh coat of white paint to welcome in the new year. The final touch comes with the addition of color to represent lotus leaves encircling the stupa.
– Scott Faiia ©2009
PCV Malaysia 1973–1975
Irrigation Engineering 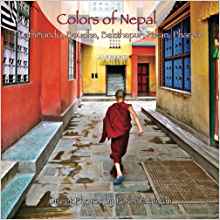 From the introduction:
In the late 1960s, Nepal was a popular destination for some of my affluent Hippie friends. It was an exotic place, ruled by a King, with friendly people, spectacular scenery, cheap beer, and good “ganja.” They returned with wild stories of dancing and drinking parties and trekking through remote mountain villages, but I never went. After working in the movie business for 25 years, and raising two kids, I retired in 2004 and travelled throughout Asia. Then in 2007, I met a wonderful woman in Tibet, and convinced her to marry me. Helena designs jewelry, buys precious stones in India and crafts her pieces in Nepal and Thailand. So, I made it to Nepal, but it was a very different place, embroiled in a civil war between Maoists in the countryside and the Monarchy in Kathmandu. Students demonstrated against the government and police fired tear gas at them. Starving children were begging in the streets. We stayed in the Thamel district of the city where hotels, bars, restaurants and handicraft shops lined every narrow street. Taxis, motorcycles and tourists competed for space. Nepal was nothing like the stories I heard. Nepal is a poor country, in fact, I consider it a failed state. Officials cannot agree on any issue and refuse to write a new constitution. Corruption runs rampant and if foreign aid and NGOs stop pouring cash into the economy, the country would probably collapse. Here is a land with an abundance of fresh water flowing from the Annapurna and Himalaya mountain ranges, yet they suffer from power outages most of the day and their drinking water is polluted. Dirt streets turn into muddy streams during monsoon season. Healthcare and education are only available to those who can afford it. So, we moved from Kathmandu to the suburb of Boudha and explored the ancient towns of Patan and Bhaktapur, all UNESCO World heritage sites. We enjoy walking and my wife loves to shop, so we see and meet many of the local people. I carry a black Micro 4/3 camera, with a 40mm prime lens and take many photos. A person or group catches my eye, then the background and I search for natural light and the best angle. This happens quickly, so I simply set the aperture and let the camera do the rest. I've learned that the camera does it better and much faster than me. Smiling, looking people in the eye and asking politely before taking their photo almost always works, particularly in Nepal. Most, despite their poverty, their clothes, or hair, pause and look into the lens; not with a “Kodak smile,” but an honest look that shows in their eyes. Afterwards, I show the digital image to them and offer to email it, but most don't have email, a computer, smartphone or internet access. Beauty is subjective and comes in many colors; some bright, some dark. What interests me are real people in real life situations. Beautiful people and places do not inspire me, but I see beautiful beggars, workers and street dogs. Capturing this reality in a fleeting moment, with my camera and limited technical skills is my intent. I want you to see the subject or situation and feel the emotion that charged that moment in time. That emotion can be joyous or sad and I hope it is felt in your heart. Colors of Nepal is my first book. The photos were shot over two five-month periods in 2012-13, mostly in Kathmandu, Boudha, Bakthapur, Patan, and Pharpin. Friends looked at my photos and read the stories and encouraged me to do a book, then some of them actually did it for me. I’m very grateful. 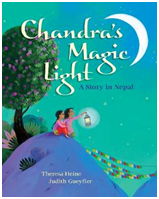 A heartwarming story set in Nepal of two resourceful sisters who bring the safety of solar-powered light to their family.

Summary:
The film is based on a journey embarked on by two friends, Prakash and Kiran—belonging to different castes—in search of a missing hen, and unaware of the tyranny brought by the fragile 2001 ceasefire during the Nepalese civil war.”

From Wikipedia:
Sophia Pande of Nepali Times wrote that the film is "an example of the new wave of Nepali cinema, the kind that chooses to portray stories with truth and heart, over melodrama and action.”

The Himalayan Times wrote in its review: "A mixture of tragedy and comedy, while portraying the brother-sister bond, friendship, caste-based discrimination and the then time of Maoist insurgency in the country, Kalo Pothi has been made with finesse."

Clarence Tsui of The Hollywood Reporter wrote, "Bolstered by stirring performances from his cast, Bham and his crew have produced an evocative piece about harsh lives unraveling in a war-torn, rustic land. Mixing moments of humor and tragedy, along with realism and the ethereal—the latter embodied in fantastic dream sequences illustrating Prakash’s suppressed feelings of grief and loss—Black Hen is an effective showcase of a promising filmmaker in flight.”

Sur Sudha is known as Nepal’s “Musical Ambassadors,” and is dedicated to creating music that disseminates a universal message of peace and harmony, and supports the effort to remove poverty from the face of the Earth. Their music additionally works to demonstrate how two of the world’s great religions—Hinduism and Buddhism—find perfect fusion in Nepal. Sur Sudha seeks to promote these ideals through traditional Nepali instrumental music rendered with the flute, sitar, and tablas; these are the most popular Nepali instruments, and are referred to as “the three sons of Nepal.” Having performed for Heads of State around the World, Sur Sudha has the power to captivate and enthrall—providing listeners a sense of the enlightening power of music. Play for Change.