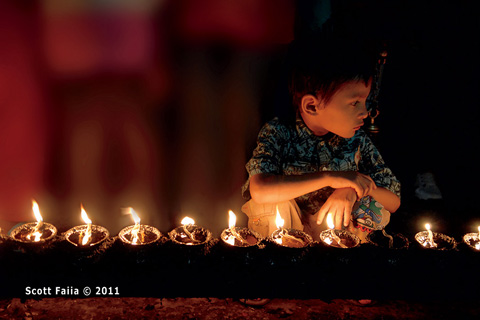 Across the glow of oil lamps, a child watches as devotees at the Kumbeshwar Temple in Patan stand and honor Shiva during the annual Janai Purnima festival. Janai means “thread” and purnima is “full moon,” and during this full-moon festival Nepal's Hindus put on a new “sacred thread” as a symbol of protection. Priests wear the janai diagonally across the torso, but most Hindus wear a thread around the wrist—which is then ideally removed during the Tihar festival a few months later.
– Scott Faiia © 2011
PCV Malaysia 1973–1975
Irrigation Engineering 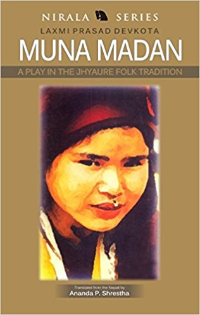 Summary:
Written in popular Jhyaure folk tradition, the play weaves a moving tale of Madan, who goes to Lhasa to earn an honest dream of bedecking his beloved wife, Muna, with ornaments of gold and of fulfilling the final wishes of his ailing mother. On his way back home, Madan falls sick. Drama then unfolds to capture the agony of a human life caught up in the twilight of dreaming and knowing. Nepalese translator Anand P. Shrestha for the first time brings alive the immortal music that reverberates in the bloodstream of Nepalese people.
Muna Madan is the most commerically successful Nepali book ever published. A national legend, Devkota’s famous statement, made before his 1959 death, was that “it would be all right of all my works were burned, except for Muna Madan,” is a testament to the power that this text holds over Nepali culture.

Reviews
"Muna Madan is a story of migration, of a movement outside the vale of mind, the geopolitical compulsion of moving out to labor and come back to live to the rhythm of the Himalayan hills..." --Yuyutsu Sharma in Foreword
"Here is perhaps first ever authentic English translation of Mahakavi Laxmi Prasad Devkota's magnum opus, Muna Madan... comes as a watershed in the history of Nepali literature... --The Kathmandu Post
"A perfect job... the translator's eighteen years devotion to the completion of this work deserves appreciation for maintaining rhythm, theme and rhyme of the original... Commendable." The Independent, Kathmandu 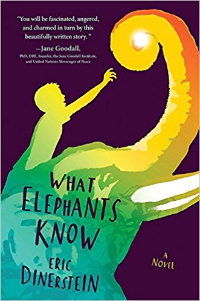 What Elephants Know
By Dinerstein, Eric

In the threatened jungle of the Borderlands between Nepal and India during the 1970s, an orphaned boy discovers his fate as a great elephant driver. Brings to life Nepal's breathtaking jungle wildlife and rural culture, as seen through the eyes of a young outcast, struggling to find his place in the world.

Summary (IMDB): Set in the Annapurna Mountains of Nepal, two disparate worlds collide when a spoiled British heiress (Rachel Hurd-Wood) visits the headmistress of a small orphanage (Suesha Rana) in an attempt to fix her image through charitable acts. Amidst both hope and tragedy, the western-savvy bush pilot (Raj Ballav Koirala), and American photojournalist hired as chaperon (Gunner Wright) discover they too have reasons to change. This story falls between the difficult yet promising path we walk to live better, give more fully, and to love.