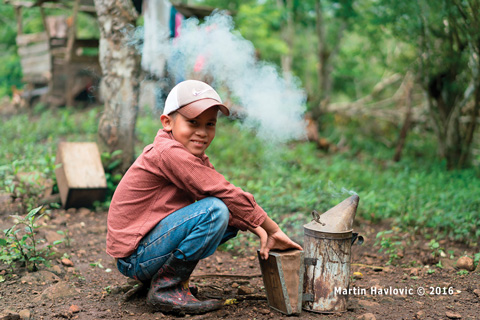 Proudly stoking the smoker that will quiet the bees in his family’s hives, this boy in the rural village of Villa Sandino is learning to help his father care for the beehives on their family farm. The honey produced is enjoyed by the family and is also used as a cash crop to supplement the family’s other farm income.

The recent introduction of commercial beekeeping represents both a new product to bring to market and new skills, bolstering the agricultural economy of this central Nicaraguan community.
– Martin Havlovic © 2016
PCV Togo 1976–1979
Agriculture Teacher 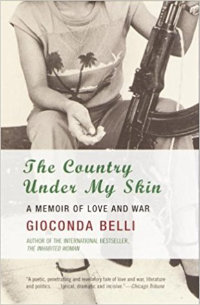 The Country Under My Skin: A Memoir of Love and War
By Gioconda Belli, trans Kristina Cordero, 2003

Summary:
An electrifying memoir from the acclaimed Nicaraguan writer ("A wonderfully free and original talent" —Harold Pinter) and central figure in the Sandinista Revolution.
Until her early twenties, Gioconda Belli inhabited an upper-class cocoon: sheltered from the poverty in Managua in a world of country clubs and debutante balls; educated abroad; early marriage and motherhood. But in 1970, everything changed. Her growing dissatisfaction with domestic life, and a blossoming awareness of the social inequities in Nicaragua, led her to join the Sandinistas, then a burgeoning but still hidden organization. She would be involved with them over the next twenty years at the highest, and often most dangerous, levels. Her memoir is both a revelatory insider's account of the Revolution and a vivid, intensely felt story about coming of age under extraordinary circumstances. Belli writes with both striking lyricism and candor about her personal and political lives: about her family, her children, the men in her life; about her poetry; about the dichotomies between her birth-right and the life she chose for herself; about the failures and triumphs of the Revolution; about her current life, divided between California (with her American husband and their children) and Nicaragua; and about her sustained and sustaining passion for her country and its people.

Editorial Reviews
From Publishers Weekly
Belli's upper-class Nicaraguan family was unsympathetic to the Somoza dictatorship, but would have been shocked to learn that their 20-something daughter was joining the underground Sandinistas even as she worked her bourgeois day job at a prestigious advertising agency. This lush memoir follows Belli from her sterile marriage to her first affair, from her first published poem to her first subversive act, and then through a series of exiles, until her triumphant return to her liberated homeland... only to face another struggle to liberate her own heart. The account is both intensely personal and informatively political. Belli (The Inhabited Woman) was no mere sympathizer or mistress to a companero but an active militant and strategist in her own right. She smuggled weapons, ran roadblocks, formed factions with revolutionary tendencies, argued strategy with Castro and represented liberated Nicaragua at Third World conferences from Moscow to Tripoli. An honest, insider's account of the very real debates surrounding this major revolution would be valuable in itself, but Belli offers more: a frank examination of her own struggle for love. Only after a series of disastrous affairs does she realize she must stop adjusting herself to how she expects her lover will react and just be herself. Next to the monumental upheavals of the Sandinistan revolution, such personal revelations may seem minor, but to Belli and her companeras, the battle was only half won if women were again relegated to mistress-to-the-mighty status. Belli shares her story in some 50 brief chapters, each subtitled to foreshadow content-an oddly reassuring format. From Booklist
*Starred Review* Belli, author of the acclaimed novel The Inhabited Woman (1994), could have simply enjoyed the benefits of upper-class Nicaraguan life as a young wife and mother, but privileged domesticity could not contain her questing spirit. She soon launched a successful advertising career in Managua, found her soul mates among writers and revolutionaries, and became both a celebrated poet and a Sandinista, risking her life in her country's fight for freedom. Belli's dramatic and heroic story is an epic of liberation both personal and communal, and she chronicles her harrowing experiences with magnetic candor and lithe lyricism, sharing her insider's view of the Sandinistas' hard-won, tragically brief victory and the wrenching anguish of their annihilation thanks to Reagan and Bush and the Iran-Contra debacle. Motherhood and love affairs under fire, gun running and media work, poetry prizes and exile, and ceaseless combat against misogyny and despair, Belli's powerfully told story reveals the symbiotic give-and-take of body and soul, art and politics, and altruism and pragmatism that make up the human continuum. A tribute to beauty, valor, and justice, Belli's giving and clarion book is also an antidote to fear and apathy, and a reminder that freedom is always a work in progress. Donna Seaman 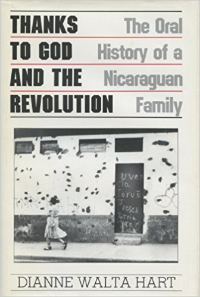 Thanks to God and the Revolution: The Oral History of a Nicaraguan Family
By Hart, Dianne Walta

A picture of a close-knit and loving family, the Lopez family. Tracing their story from the years of repression and guerrilla activity under Somoza through an era of personal and political revolution in the 1970s and 1980s, the author shows people persevering against every kind of adversity.

Summary (IMDB): Sixteen female sex workers have been named judicial aides by Nicaragua's Supreme Court to facilitate the resolution of conflicts that come up in their work. It is the first time in the world that sex workers have had access to this function. The film accompanies some of these women in their mediation work and in the actions they promote through their association, Girasoles (Sunflowers) de Nicaragua, to gain recognition and regulations for autonomous sex work.