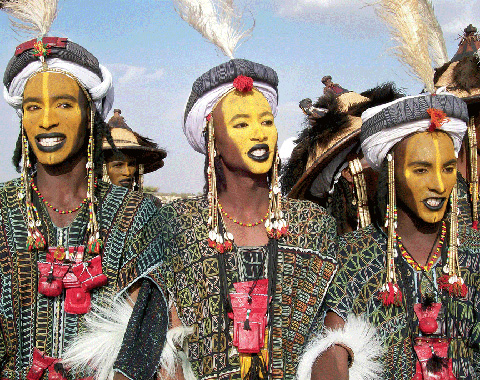 Each fall, after the rainy season, the nomadic Wodaabe cattle herders leave the bush to attend an annual gathering. This is the one event of the year where all herders are in one place and can truly enjoy each other’s company, catching up with old friends and making new ones. There is also the prospect of finding a spouse. Traditionally, the men are chosen by women in a dance called Geerwol. The men don special costumes and paint their faces to show off their beauty. Desirable traits are white teeth, a long, straight nose, high forehead, and white eyes. Nowadays, the winner of Geerwol takes home gifts such as money, sheep, and clothes, and if he is lucky, finds a girlfriend or wife.
– Crystal Pilon ©2008
Peace Corps Volunteer, Niger 2008-09
Environment

To Timbuktu: A Journey Down the Niger
by Mark Jenkins

Book Description
A rich combination of cultural exploration, history, and gripping adventure, this beautifully repackaged edition of To Timbuktu is a journey not to be missed.

Film: Magic and Ecstasy in the Sahel
Director: Jason Buchanan (2005)