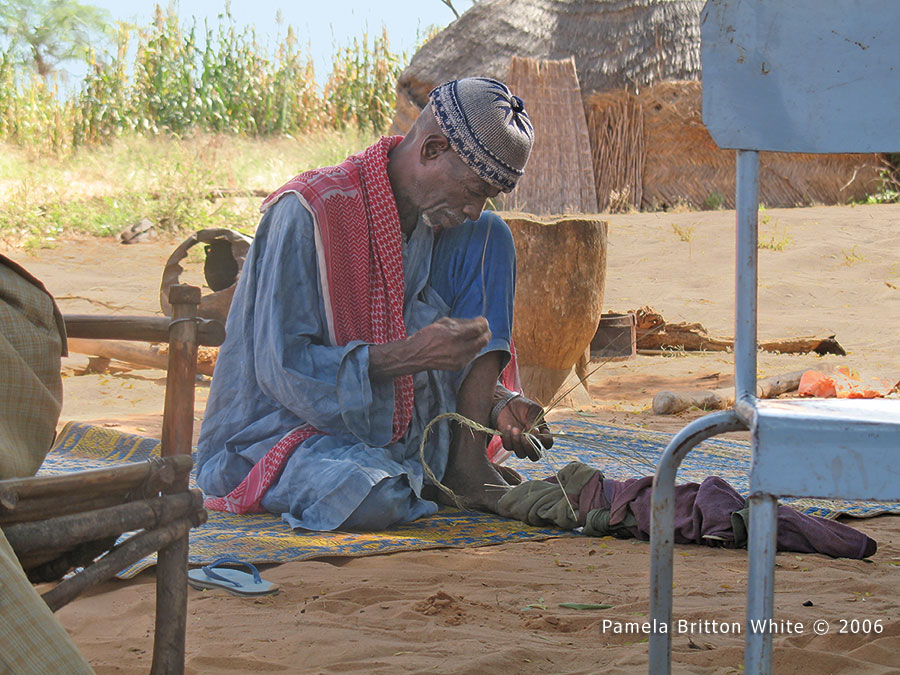 The village of Boundissinti is small and remote—mostly straw houses and a few mud-brick structures surrounded by millet fields. With the entire village of sixty people gathered under the shade tree for an important meeting, a few older men sit braiding grasses into rope. The grasses are formed into a starter loop that is hooked over the big toe as an anchor, allowing the weaver to braid the grasses into long lengths of rope. As the meeting progresses and the discussion continues, the ropes grow longer and longer.
– Pamela Britton White ©2006
PCV Niger 1969–1970
Maternal and Child Health 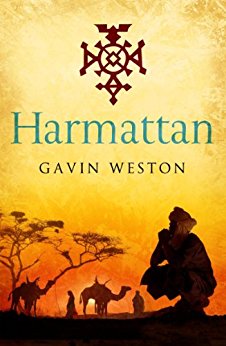 Goodreads & Amazon:
Harmattan (from an Arabic word meaning destructive wind ) tells the story of Haoua, a young girl growing up in a remote village in the Republic of Niger. Spirited independent and intelligent, Haoua has benefitted from a stable home life and a loving and attentive mother. She enjoys working and playing with her siblings and friends. Haoua worships her elder brother, Abdelkrim, a serving soldier who sends money home to support the family. But, on his last home visit, Abdelkrim quarrels with their father, accusing him of gambling away the money he sends and being the cause of their mother’s worsening health. It also emerges that their father plans to take a second wife. Despite this Haoua finds contentment in her schoolwork, her dreams of becoming a teacher and in writing assiduously to the family in Ireland who act as her aid sponsors. But for Haoua, there are new storm clouds on the horizon. As civil strife mounts in Niger, Haoua begins to fear for Abdelkrim’s safety. Haoua’s mother's illness is much more serious and further advanced than anyone had recognized and her father's plans are turning out to be far more threatening than she could have ever imagined. Approaching her twelfth birthday, Haoua is alone and vulnerable for the very first time in her life.

From Booklist
At 11, narrator Haoua Boureima is a promising student in a remote village in Niger, her education supported by Vision Corps International. But her dreams of being a teacher die, and her life begins a downward spiral, when her mother, diagnosed with AIDS, is taken to a hospital in the capital city of Niamey. As the oldest of three children at home, Haoua is given even more chores by her father, who forbids her returning to school despite the entreaty of her teacher. Haoua’s only support is from her older brother, Abdelkrim, a soldier stationed in Niamey, who does what he can before the unrest that follows the assassination of President Mainassara. At 12, Haoua becomes the third wife of her father’s brutal cousin, with dreadful consequences. Weston’s first novel captures a time and a place, from the beauty of Niger’s vistas to the inhumanity of its patriarchal culture. The latter will arouse outrage, as will the restrictions posed by an NGO that is there to help. This is fiction that conveys truth more vividly than fact could. —Michele Leber

These tales run the gamut from teaching ethical and moral lessons to portraying tricksters to naming animals to having fun. ZARMA FOLKTALES OF NIGER provides the cultural and historical context necessary to truly appreciate and understand these tales. The introduction outlines Niger's history and describes the relationships of the Zarma to neighboring tribes.

The Fruitless Tree by Aïcha Macky: Woman among mothers, an analysis by Olivier Barlet (Source: Africultures. Translated from French by Beti Ellerson).

Aïcha Elhadj Macky was only five years old when her mother died after childbirth. It is this trauma that Aïcha, who is married, still without children, reconstructs in this film about infertility and its disorder. She starts with childbirth: the calm and the advice of the midwife, the fatigue of the mother, the arrival of the child. Then a spoken letter that refers back to it: "Dear Mother, behind the camera, I tremble throughout my body"; before concluding: "In my sleepless nights, your spirit guides my steps."

This film builds on the emotion of this personal implication, as an interrogation of society, a question posed to all of us. The task was not easy, as the subject remains taboo in Nigerien society. How to convince one to share? How to film a face that does not want to be seen? Aïcha Macky accomplishes this very well. With her small technical team, she has an eye for detail, the lighting, the mood. The camera, the editing, are of great tenderness. The testimonials are subtle conversations, where she displays the quality of attentiveness, of glances, of silences. It was necessary to have this level of sensitivity in order to show these very delicate issues in an environment where sex remains a taboo subject, where a woman does not have the right to go uncovered.

… Must one have a child in order to accomplish her personal life as a woman? For Aïcha, who is labeled as a "tree without fruit," it was with this film that she could assert herself above all as a woman among mothers—a place that requires courage and determination, but that will give courage to the many women confronted with men’s indifference towards their suffering, the suspicion and rejection of husbands and their families, the taking of co-wives to ensure fertility... Women's rights are perceptively discussed, clearly but without a banner, notably through the comments of an imam at the Islamic school who encourages pursuing a divorce if the marriage does not lead to the woman’s enjoyment and pleasure in the same way it does for the man, and to file a grievance to the religious leaders in the case of refusal.

This is the unspoken that Aïcha confronts head-on. She is not satisfied to only denounce the plight of women who are rejected because of infertility; on the basis of the testimony of those who fight for their dignity, she demands the ability to control one’s own destiny. This film, hence, is a project; not only to correct these practices, but also and above all to tell through word and image; and in this way to speak to the world and contribute to change.

Hailing from Niamey, the capital city of Niger in West Africa, the large ensemble band Tal National was formed in 2000 by charismatic ringleader and West African guitar master Hamadal Issoufou Moumine, also known as Almeida. Backed by anywhere from five to twelve musicians and singers, Almeida grew Tal National to be hugely popular on a local level through constant regional touring and ceaselessly energetic performances, as many as five nights a week and as long as five hours per show. Their first album Apokte was released in 2006 and they followed in 2008 with the better-recorded A-Na Waya, an album that established them as the premier band of their region—hugely successful in Niger and with a greater audience elsewhere with the help of three different YouTube videos. In 2011, the band recorded a third album, Kaani, recorded with the help of Chicago engineer Jamie Carter, who also worked on A-Na Waya. The group signed to Fat Cat Records in April of 2013 and Kaani's international release helped the band tour outside of their country. With the widespread critical success of Kaani, Tal National reenlisted Carter to produce their follow-up Zoy Zoy which FatCat released in the spring of 2015.