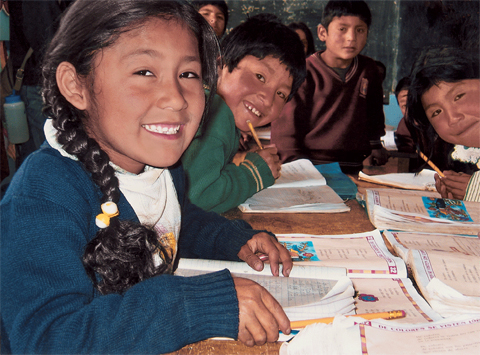 At more than 11,000 feet above sea level, the city of Cusco is known for its thin, dry air. The noses and cheeks of children are red with windburn and cracked from lack of moisture. At this altitude, it is chilly even in the October springtime. Each day, children come from surrounding villages to this small school run by a severe-looking, but kind-hearted woman who has dedicated her life to teaching. Her class­rooms are crowded and cold, and lack the most basic supplies. Nonetheless, the rooms are filled with the happy chatter of small children. Their broad smiles announce how glad they are to attend this place of learning every day.
Photo © 2003 Alison Hoeman

Book Description
The daughter of Italian immigrant parents, novelist and travel writer De Ferrari describes her life, from growing up in Tacna, a small desert town in the foothills of the Andes mountains, to becoming a museum curator in the United States in this 1995 memoir.

The Llama's Secret
by Argentina Palacios