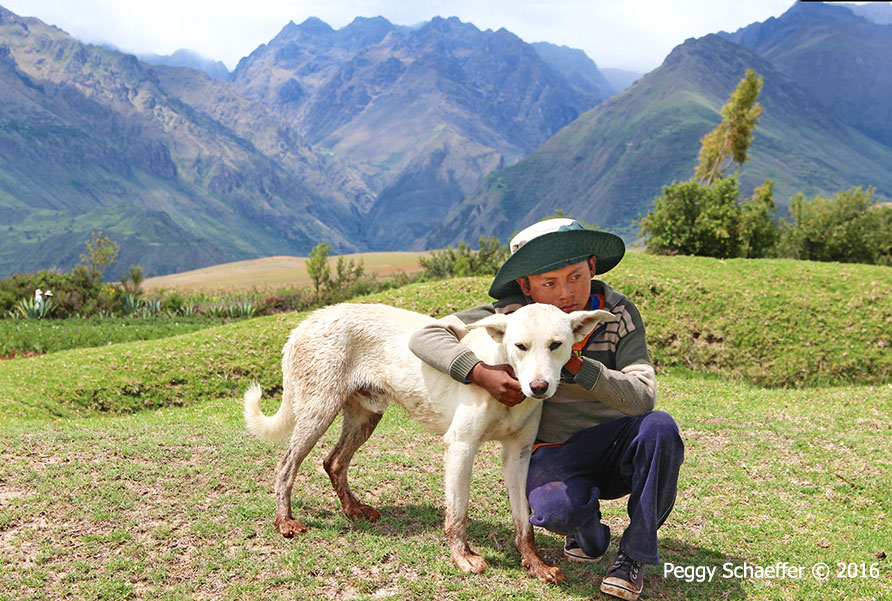 Traveling through the Sacred Valley of the Incas toward Machu Picchu, we stopped in the town of Chinchero and then paused for a picnic lunch. In a field with imposing vistas in all directions, we met this boy and his dog. The local people speak Quechua, the language of the Incas, and are known for their traditional weaving. At over 3,762 meters, or 12,000 feet, this mountainous is very fertile and still farmed as it has been for many centuries.
Peggy Schaeffer © 2016
PCV Yemen 1977–1979
School Librarian

Languages Spanish (off.), Quechua (off.), Aymara (off.), other native/minor Amazonian languages

Mother of God: An Extraordinary Journey into the Uncharted Tributaries of the Western Amazon
By Paul Rosolie

Summary:
Naturalist and explorer Paul Rosalie’s extraordinary adventure in the uncharted tributaries of the Western Amazon is a tale of discovery that vividly captures the awe, beauty, and isolation of this endangered land—and presents an impassioned call to save it. In the Madre de Dios—Mother of God—region of Peru, where the Amazon River begins its massive flow, the Andean Mountain cloud forests fall into lowland Amazon Rainforest, creating the most biodiversity-rich place on the planet. In January 2006, a restless eighteen-year-old hungry for adventure, Paul Rosolie embarked on a journey to the west Amazon that would transform his life.

Venturing alone into some of the most inaccessible reaches of the jungle, he encountered giant snakes, floating forests, isolated tribes untouched by outsiders, prowling jaguars, orphaned baby anteaters, poachers in the black market trade in endangered species, and much more. Yet today, the primordial forests of the Madre de Dios are in danger from developers, oil giants, and gold miners eager to exploit its natural resources. In Mother of God, this explorer and conservationist relives his amazing odyssey exploring the heart of this wildest place on earth. When he began delving deeper in his search for the secret Eden, spending extended periods in isolated solitude, he found things he never imagined could exist. “Alone and miniscule against a titanic landscape I have seen the depths of the Amazon, the guts of the jungle where no men go,” Rosolie writes. “But as the legendary explorer Percy Fawcett warned, ‘the few remaining unknown places of the world exact a price for their secrets.’”

Editorial Reviews
“A rousing eco-adventure. . . . This is old-school nature writing, unabashedly romantic and free of alienation. . . . Rosalie’s powers of description are so vivid and engrossing that readers will be swept along in his passion.”

“Rosolie writes with intrepid curiosity and a passion for ecological preservation.”

“A great adventure with a great and enduring point: we simply must protect these last, vast slices of the planet that still work the way they’re supposed to.”

“Thanks to fastidious journal-keeping that preserved a wealth of detail and emotion, Rosolie delivers an old-fashioned jungle adventure, one with rare immediacy and depth of feeling for the people and creatures he encounters.”

“Paul Rosalie’s Mother of God is more than a thrilling adventure tale, it’s an old-fashioned boy-meets-jungle love story. Be prepared to fall for it.”

“An extraordinary book…His vivid writing immerses you in his adventures as he explores an ancient pristine forest where no white man has been, where he encounters amazing creatures, and experiences the relentless power of untamed nature…There are parts that will haunt you, scenes you will never forget.”

Amazon Reader Reviews
Mysterious adventure awaits you
Vivid is the best word I can use to describe this book. This year, I have read several "Amazon adventure" type books, beginning with The Lost City of Z, then The Lost City of the Monkey God, and finally this one...which might be my favorite. … It takes you right into the Amazon with the author, and you really can envision the wondrous world he describes as if you are right there with him, stalking predators and observing thousands of species. This story gets right into the action, and places the reader right where you want to be—in a hammock listening to wild bird calls, crawling on the jungle floor looking for ants, floating down a river surrounded by the real possibility of getting lost forever. The author has a very good grasp on his privilege in the world and how he might be able to use that to save the jungle he grows to love. It's really an astounding tale, with great imagery and real tension. If you like adventure in mysterious places, this is a great pick!

Adventurous, captivating, inspiring, relevant
Benjamin Franklin once said, "Either write something worth reading or do something worth writing." Well, Paul Rosolie did both. Mother of God is an incredible account of Rosalie’s interactions with nature and wildlife in the Amazon Rainforest, and with every turn of the page a new adventure awaits. Eloquently written, Rosolie successfully and passionately portrays his love of all things wild and makes you feel like you are right at his side as he describes animals like anacondas, anteaters, and jaguars along with the pristine wilderness he witnesses in the Madre de Dios region of Peru, specifically along the Las Piedras River. Rosolie is a conservationist with a gift for fighting for what matters with his words. An adventurous, captivating, and inspiring read, Mother of God tops my list of incredible books. 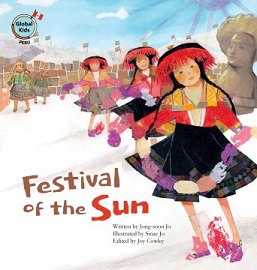 Festival of the Sun
By Jong-soon Jo; edited by Joy Cowley; illustrated by Sinae Jo

Summary:
Festival of the Sun is a story about Peruvian people preparing for their annual sun festival. Dating back to the Inca Empire, it is one of the three great festivals in South America, and it takes place in Cuzco, Peru, each winter solstice.
This book is part of the Global Kids Storybooks Series. 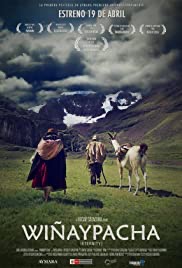 Summary: An elderly couple try to survive in Los Andes of Peru while they wait for their son.
This is the first movie shot entirely in Aymara, an indigenous language spoken by the Aymara people of the Andes, in the south of Peru and in the northwest of Bolivia.

Honesty and Sincerity
Strip away all of these skyscrapers, their glass windows, packaged meats, and cell-phones. Two people, really living next to one another, knowing both the comfort and horrors of life. Each swell of life's tide carrying out, just a little bit more away from the place they used to call home, makes the couple, and their life more valuable than any crest whitening strip, or gucci stiletto we worship in so many places.

If you're wishing for the real world, you'll find it here, haunting, unforgettable, and beautiful to the core even in the depth of its most terrible moments.

More lives would be valued, if more lives were given up for the loneliness of others. 🙏🏼Amen

Feelings
I cannot express the way that I felt when I saw this film, but, I must to say that Wiñaypacha may be one of the most shocking film that I've ever seen, because I think that it tries to express somehow the simplicity of the Andean life, that sometimes the life is real and loneliness can be shares with the person you love.

Brilliant
A film that explores the truth about the forgotten places in the Andes—not only in Peru but all the Andean country.