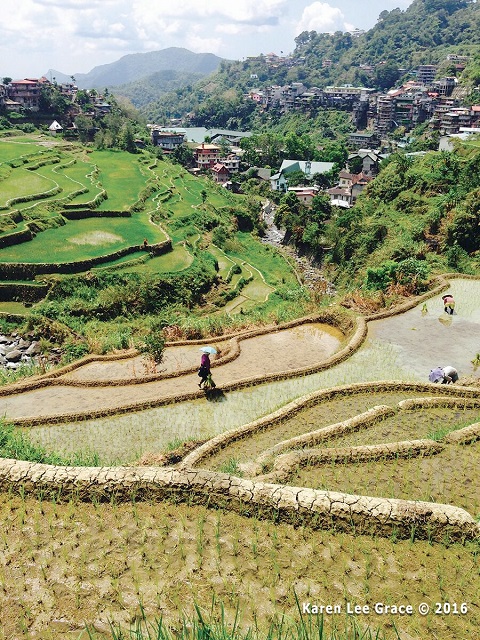 Traditional agriculture practices of transplanting rice seedlings are still followed today by the Ifugao, an indigenous people of the Philippines whose culture has been centered around rice farming for nearly 2000 years. Terraces that begin at the base of the mountain range and extend several thousand feet up are irrigated by mountain streams that flow into canals and down through the terraces. Hugging the contours of the mountains and overlooking the town of Banaue—the base point from which many tourists hike this UNESCO World Heritage site—these terraced hillsides attest to the enduring traditions of the Ifugao.
– Karen Grace Lee © 2016
PCV Panama 2009–2011 | Community Economic Development
PC Response Philippines 2013 | Disaster Risk Reduction 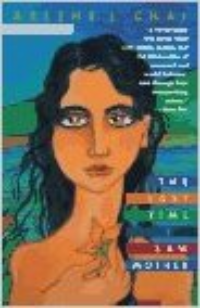 Summary:
Caridad's mother never writes. So when a letter arrives for her in Sydney from Manila, Caridad doesn't even recognize her mother's handwriting. There is more distance than just miles between the two women. And that is why Caridad is called home. Her mother needs to talk. And to reveal a secret that has been weighing heavily on her for years. As Caridad hears at last the unspoken stories, and the never forgotten tragedy of the war years, she will learn a startling truth that will change her life forever. For Caridad is not who she thinks she is. . . .

Editors Review
"an often lyrical and always tough-minded debut . . . Provides rare insight into the three cultures--Spanish, Chinese, and Filipino--that coexist in the Philippines."

"Beautifully written . . . Reading each chapter is like having a conversation with a close friend."

"A sensitive . . . portrait of a family of Filipina women . . . The novel illuminates much modern Philippine history."

Amazon.com Review When an oblique letter summons Caridad from Australia to her mother's side in the steamy Philippines, she travels there fearing loss. And loss she finds, but one that finally throws light on the whispers that dogged her life in this land where Spanish, Chinese, and Filipino cultures slap against one another. "The past defines us as much as the present," says Caridad. "Because mine was missing, I never felt whole." Four women--Caridad, her mother Thelma, aunt Emma, and cousin Ligaya--piece together the puzzle of a life begun in wartime. Their vantage points differ, but their stories are silver-tongued and spellbinding even as Ligaya's bitterness stains the pages and Emma's long, mute acceptance of fate's cruelty rings false. Wrapped around Caridad's story is a far bigger one of the years when the Japanese occupied the Philippines and American liberation forces decimated the country.

From Publishers Weekly
The central story in this interesting but uneven debut novel by Filipina author Chai concerns a woman who discovers the truth about her parentage. Caridad, a Filipino woman living in Sydney, Australia, with her teenage daughter, discovers on a trip home to Manila that her elderly mother, Thelma, is actually her aunt?and that her vivacious aunt Emma is her mother. Using multiple, shifting first-person perspectives, these three women, as well as Caridad's beautiful, bitter cousin, Ligaya, relate the long story of why this secret adoption took place. The voices of the four women are virtually identical, however, and sometimes lapse into cliched musings about life and love. More compelling is the seamlessly interwoven background Chai provides: 50 years of history in the Philippines?from the WWII Japanese invasion and its vividly recounted brutalities through the battle for liberation (in which systematic American bombing caused more damage than three years of Japanese occupation) to the Marcoses' 20-year rule and the subsequent People's Power revolution. Fascinating side lights illuminate the subtleties of race relations among native Filipinos and the other ethnic strands in the island's social fabric: "the Spaniards they feared and envied; the Chinese they hated and envied." Chai's prose is devoid of stylistic flourish and the narrative is often repetitious and digressive. When she tells of life in the evacuation camps or in war-decimated Manila, however, the descriptions are sensual and palpably detailed. Thus the truth about Caridad's past pales against Chai's evocation of her country's travails. 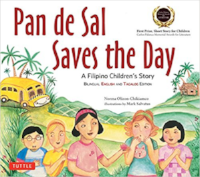 Text mainly in English with some words in Tagalog. Pan de Sal, embarrassed by her humble home and upbringing, saves the day when her class becomes stranded on a broken-down bus and she is the only one who knows how to keep everyone entertained without fancy food, toys, or games.

Summary (Facebook): "Bundok Banahaw/Sacred and Profane is an exploration of the titular mystical mountain using secret histories and sacred knowledge as a way of piecing together the Philippines's cultural psyche." —from Rappler Awards: Best Documentary, Cinema One Originals 2017