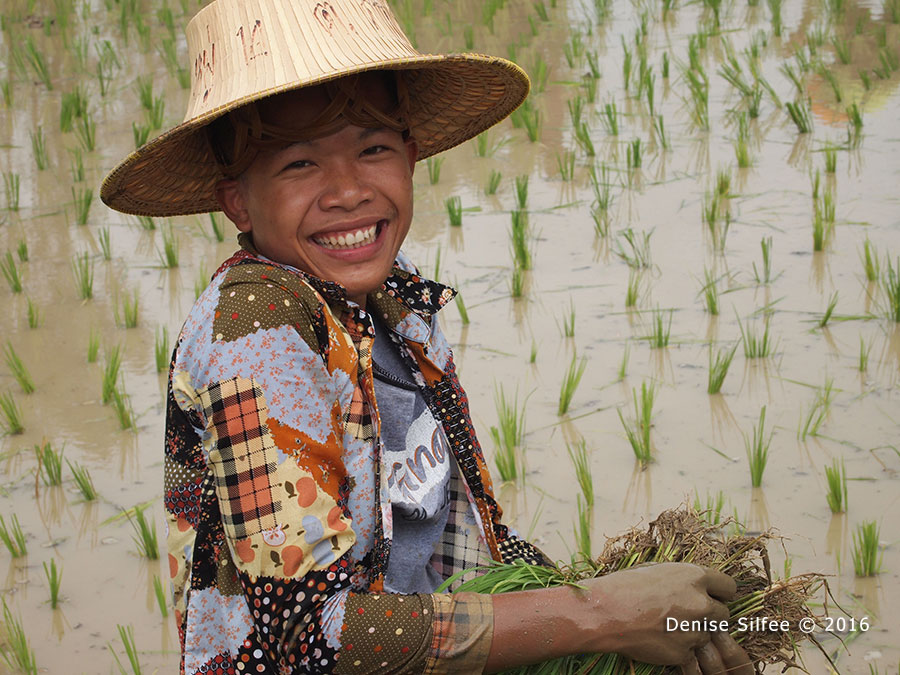 Every year, students at Si Thep School in central Thailand participate in planting rice on the school’s grounds. Students and staff roll up their pant legs to work side-by-side in the flooded fields, planting rice that will be harvested for the school. The teachers believe this activity helps students appreciate the culture of rice farming that is so important to the community’s economic stability. Despite muddy feet and the intense heat of the day, this 11th-grade student is all smiles all day.
– Denise Silfee ©2016
PCV Thailand 2011–2013
Teacher Collaboration & Community Outreach 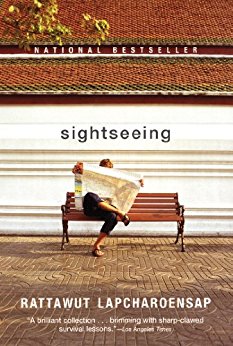 Goodreads & Amazon:
One of the most widely reviewed debuts of the year, Sightseeing is a masterful story collection by an award-winning young author. Set in contemporary Thailand, these are generous, radiant tales of family bonds, youthful romance, generational conflicts and cultural shiftings beneath the glossy surface of a warm, Edenic setting. Written with exceptional acuity, grace and sophistication, the stories present a nation far removed from its exoticized stereotypes. In the prize-winning opening story "Farangs," the son of a beachside motel owner commits the cardinal sin of falling for a pretty American tourist. In the novella, "Cockfighter," a young girl witnesses her proud father's valiant but foolhardy battle against a local delinquent whose family has a vicious stranglehold on the villagers. Through his vivid assemblage of parents and children, natives and transients, ardent lovers and sworn enemies, Lapcharoensap dares us to look with new eyes at the circumstances that shape our views and the prejudices that form our blind spots. Gorgeous and lush, painful and candid, Sightseeing is an extraordinary reading experience, one that powerfully reveals that when it comes to how we respond to pain, anger, hurt, and love, no place is too far from home.

From Publishers Weekly Starred Review.
The Thailand of Westerners' dreams shares space with a Thailand plagued by social and economic inequality in this auspicious debut collection of seven plaintive and luminous stories. In the title tale—an exquisite meditation on human dependency—a son and his ailing mother must accept the dismal reality of her encroaching blindness and what it means for his plans to attend college away from home. In "Don't Let Me Die in This Place," the most exuberant of the stories, an ornery and uproarious widowed grandfather, recently crippled by a stroke, moves from Maryland to Bangkok to live with his son, Thai daughter-in-law and their two "mongrel children." "Farangs" and "At the Café Lovely" convincingly examine adolescent friendship and love, as does "Priscilla the Cambodian"—though when a refugee camp is torched by native Thai xenophobes, it veers toward the politically dark and ominous. Politics and fear also play a role in "Draft Day," a painfully grim story about two young male friends, one of whom avoids military conscription because of his privileged background, and "Cockfighter," the final and longest of the pieces, in which a berserk local thug rules a town through violence and corruption. Young or old, male or female, all of Lapcharoensap's spirited narrators are engaging and credible. Anger, humor and longing are neatly balanced in these richly nuanced, sharply revelatory tales.

From School Library Journal
Adult/High School–Seven short stories set in Thailand explore the intricacies of modern-day relationships. The overriding themes are not specific to that country, though: each tale focuses on family dynamics and dysfunction. The protagonists in five of the selections are male teens living in or around Bangkok. "Draft Day" addresses the question of loyalty as the narrator allows his parents to bribe an official to keep him from being conscripted. "Sightseeing" tells of a son whose mother is going blind and the ambivalence he feels about living his own life versus caring for her. The last two stories are also first-person narrations, but the voices are different. In "Don't Let Me Die in This Place," an elderly American tries to come to terms–albeit none too gracefully–with his relocation to Thailand to live with his son and Thai daughter-in-law and their "mongrel" children, and "Cockfighting" is told from the perspective of a teen who watches her father become so obsessed with raising roosters that he is blinded to the disintegration of his marriage. In each of the stories, Lapcharoensap offers readers a glimpse of Thailand that they will not find in guidebooks–not only the beauty of this country but also the grit, the overcrowding, and the poverty. More than that, however, he shows with rare wit and insight that coming of age in the world today is a bittersweet and complicated experience regardless of nationality. 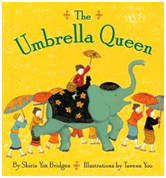 In a village in Thailand where everyone makes umbrellas, young Noot dreams of painting the most beautiful one and leading the annual parade as Umbrella Queen, but her unconventional designs displease her parents.

Summary:
‘After the loss of both parents, 11-year-old Oat faces an uncertain future when his older brother must submit to Thailand's annual military draft lottery. Unable to convince his brother to do whatever he can to change his fate, Oat takes matters into his own hands resulting in unexpected consequences. Based on the stories from the bestselling book Sightseeing, by Rattawut Lapcharoensap, the film is set in the economic fringes of Bangkok and examines the joys and challenges of growing up in contemporary Thailand. HOW TO WIN AT CHECKERS (EVERY TIME) is director Josh Kim's debut feature film” —IMDb

The ambience of 'Easy listening pop' with the smooth touches of funk, soul and house beats, Sqweez Animal is part of the new and fresh brand of new-age Thai indie music. Band Members include Win Sirivongse, ‘Win' (vocal) and Prachatip Musigapong, ‘Singha' (guitar). They met when they studied in England. Win’s “squeezing” voice is unique in its emotional expression, and the fantastic style of Singha's guitar performance is fitted to Win's voice.
Indie Label (Spicy Disc: 2007-present)