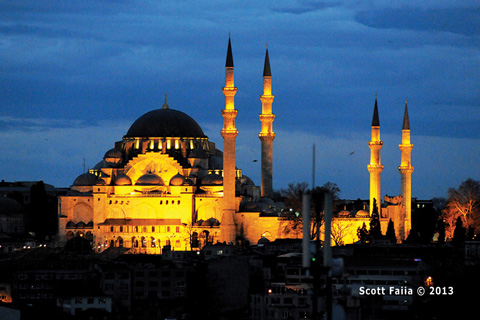 At the crossroads of Asia and Europe, Istanbul is home to thousands of mosques. Collectively, they are a rich repository of art and culture reaching back more than a thousand years. The Süleymaniye Camii (Suleyman Mosque) was completed in 1557 and is the second largest in Istanbul. It was built in the same style as the Hagia Sophia, an Orthodox cathedral built in 537 and later converted to a mosque and then to a museum. Both buildings still stand today. Istanbul’s intersecting history of diverse cultures and religions is a wonder to behold and holds many lessons for us.
– Scott Faiia © 2013
PCV Malaysia 1973–1975
Irrigation Engineering 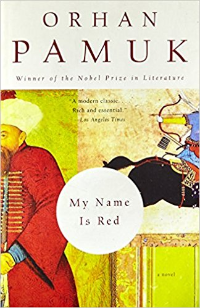 My Name Is Red
By Orhan Pamuk, trans Erdag Göknar, 2002

Summary:
At once a fiendishly devious mystery, a beguiling love story, and a brilliant symposium on the power of art, My Name Is Red is a transporting tale set amid the splendor and religious intrigue of sixteenth-century Istanbul, from one of the most prominent contemporary Turkish writers. The Sultan has commissioned a cadre of the most acclaimed artists in the land to create a great book celebrating the glories of his realm. Their task: to illuminate the work in the European style. But because figurative art can be deemed an affront to Islam, this commission is a dangerous proposition indeed. The ruling elite therefore mustn’t know the full scope or nature of the project, and panic erupts when one of the chosen miniaturists disappears. The only clue to the mystery–or crime? –lies in the half-finished illuminations themselves. Part fantasy and part philosophical puzzle, My Name is Red is a kaleidoscopic journey to the intersection of art, religion, love, sex and power.

Reviews
"It is neither passion nor homicide that makes Pamuk's latest, My Name is Red, the rich and essential book that it is. . . . It is Pamuk's rendering of the intense life of artists negotiating the devilishly sharp edge of Islam 1,000 years after its brith that elevates My Name is Red to the rank of modern classic. . . . To read Pamuk is to be steeped in a paradox that precedes our modern-day feuds beteween secularism and fundamentalism."

"Straddling the Dardanelles sits the city of Istanbul . . . and in that city sits Orhan Pamuk, chronicler of its consciousness . . . His novel's subject is the difference in perceptions between East and West . . . [and] a mysterious killer... driven by mad theology. . .Pamuk is getting at a subject that has compelled modern thinkers from Heidegger to Derrida . . . My Name is Red is a meditation on authenticity and originality . . . An ambitious work on so many levels at once."

"Intensely exhilarating . . . Arresting and provocative . . . To say that Orhan Pamuk's new novel, My Name is Red, is a murder mystery is like saying that Dostoevsky's The Brothers Karamazov is a murder mystery: it is true, but the work so richly transcends the conventional limitations of genre as to make the definition seem almost irrelevant. . . . The techniques of classical Islamic literature are used to anchor the book within a tradition of local narrative, but they can also be used with a wonderfully witty and distancing lightness of touch . . . All the exuberance and richly descriptive detail of a nineteenth-century European novel . . . The technique of Pamuk's novel proclaims that he himself is a magnificently accomplished hybrid artist, able to take from Eastern and Western traditions with equal ease and flair . . . Formally brilliant, witty, and about serious matters . . . It conveys in a wholly convincing manner the emotional, cerebral, and physical texture of daily life, and it does so with great compassion, generosity, and humanity . . . An extraordinary achievement."

"A murder mystery set in sixteenth-century Istanbul [that] uses the art of miniature illumination, much as Mann's 'Doctor Faustus' did music, to explore a nation's soul. . . . Erdag Goknar deserves praise for the cool, smooth English in which he has rendered Pamuk's finespun sentences, passionate art appreciations, sly pedantic debates, [and] eerie urban scenes."

"Pamuk is a novelist and a great one...My Name is Red is by far the grandest and most astonishing contest in his internal East-West war...It is chock-full of sublimity and sin...The story is told by each of a dozen characters, and now and then by a dog, a tree, a gold coin, several querulous corpses and the color crimson ('My Name is Red')...[Readers will] be lofted by the paradoxical lightness and gaiety of the writing, by the wonderfully winding talk perpetually about to turn a corner, and by the stubborn humanity in the characters' maneuvers to survive. It is a humanity whose lies and silences emerge as endearing and oddly bracing individual truths."

"The interweaving of human and philosophical intrigue is very much as I remember it in The Name of the Rose, as is the slow, dense beginning and the relentless gathering of pace . . . But, in my view, his book is by far the better of the two. I would go so far as to say that Pamuk achieves the very thing his book implies is impossible . . . More than any other book I can think of, it captures not just Istanbul's past and present contradictions, but also its terrible, timeless beauty. It's almost perfect, in other words. All it needs is the Nobel Prize." 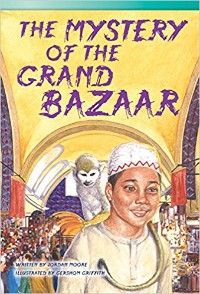 The Mystery of the Grand Bazaar
By Moore, Jordan; illustrated by Gershom Griffith

A young boy named Zeyd enjoys working at the bazaar in Istanbul. One day, someone does the unthinkable and steals a bag of gold coins from the rug merchant! When the other merchants decide to close the bazaar until the thief is found, Zeyd finds an unlikely culprit.

Summary (IMDB):Aydin, a former actor, runs a small hotel in central Anatolia with his young wife Nihal, with whom he has a stormy relationship, and his sister Necla, who is suffering from her recent divorce. In winter as the snow begins to fall, the hotel turns into a shelter but also an inescapable place that fuels their animosities... Written by Cannes Film Festival