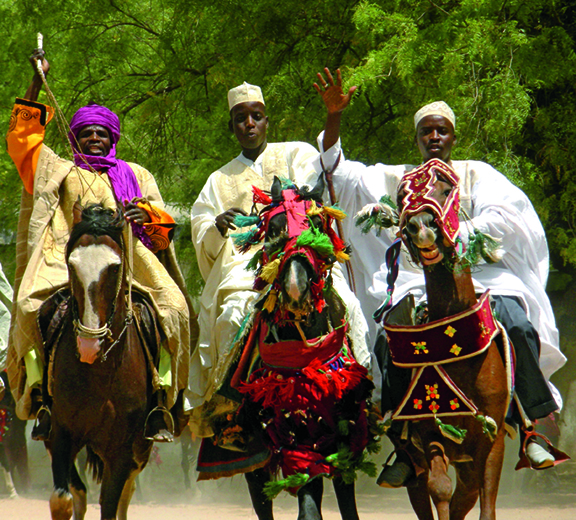 These horsemen are riding in a fantasia, a dramatic display of horsemanship and costumery in the Sahel, in the far north of Cameroon. The riders, dressed in colorful flowing boubous, charge directly at the spectators, who are gathered in the palace courtyard of the lamido, or traditional ruler of Maroua. At the last moment, the riders rein in their horses to a sudden stop - just feet from the crowd. Shouting and rattling their swords in the air, they then turn and gallop off to the side. The horsemen put on this spectacular demonstration for honored guests and, at times, in competitions against teams from neighboring areas.
– © Babette (Babs) Pollard Jackson 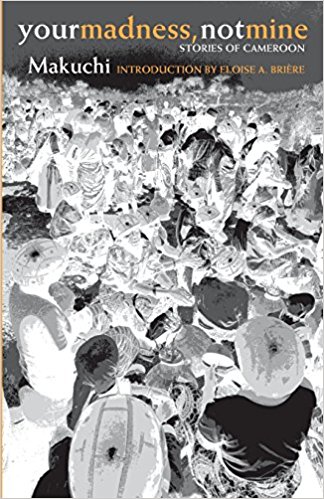 Your Madness Not Mine: Stories of Cameroon
By Juliana Makuchi, 1999

Book Description
Powerful portraits of postcolonial Cameroonian women, who probe their day-to-day experiences of survival and empowerment as they deal with gender oppression: from patriarchal expectations to the malaise of mal-development, unemployment, and the attraction of the West for young Cameroonians. 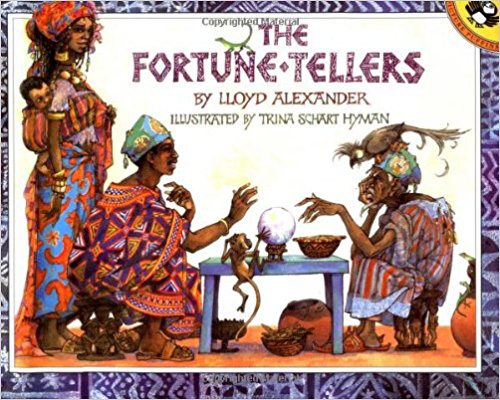 From IMDB: This thriller features a cheating wife who blackmails her young lover, forcing him to help her plot the murder of her rich husband.

From IMDB: Born This Way is a portrait of the underground gay and lesbian community in Cameroon. It follows two young Cameroonians, as they move between a secret, supportive LGBT community and an outside culture that, though intensely homophobic, is in transition toward greater acceptance.

SYNOPSIS : There are more arrests for homosexuality in Cameroon than any other country in the world. With intimate access to the lives of four young gay Cameroonians, Born This Way steps outside the genre of activist filmmaking and offers a vivid and poetic portrait of day-to-day life in modern Africa. Lyrical imagery, devastating homophobia, the influence of western culture, and a hidden-camera courtroom drama mysteriously coalesce into a story of what is possible in the global fight for equality.

FILMMAKERS’ COMMENTS:  We met Steave Nemande, the founder of Alternatives Cameroun (the first LGBT center in Cameroon) at a Human Rights Watch event in Los Angeles. He told us about a very brave group of LGBT people who congregate at Alternatives. He described how they work and play there: doing HIV/AIDS prevention and treatment, providing psychological counseling, and supporting people who are rejected by their families—but also throwing amateur runway fashion shows, dance parties, and soccer matches. And during all of this, exploring together what it means to be gay, lesbian, African, human—in a place where none of these things are simple. He said that he believed many people in that community were ready, for the first time, to tell their stories.

We traveled alone to Cameroon on tourist visas. We spok e almost no French, the official language, and though we have both traveled widely, neither of us had ever been to Central Africa. We had no idea what kind of film we would end up with. We only knew that we would determine the structure and content by listening to the people who agreed to share their stories and their lives.

Wikipedia says: The film centres around four cases in Cameroon involving violence against women. It shows women seeking justice and effecting change on universal human interests issues. It also shows strong and positive images of women and children in Cameroon. Portrays the lives of women in children in Cameroon and living by the Islamic law (Sharia law.) In addition, the cases that are examined within the film particularly deal mainly with the inequality of women and children. Specifically one of the children was beaten with a cane and the aunt was charged with child abuse.