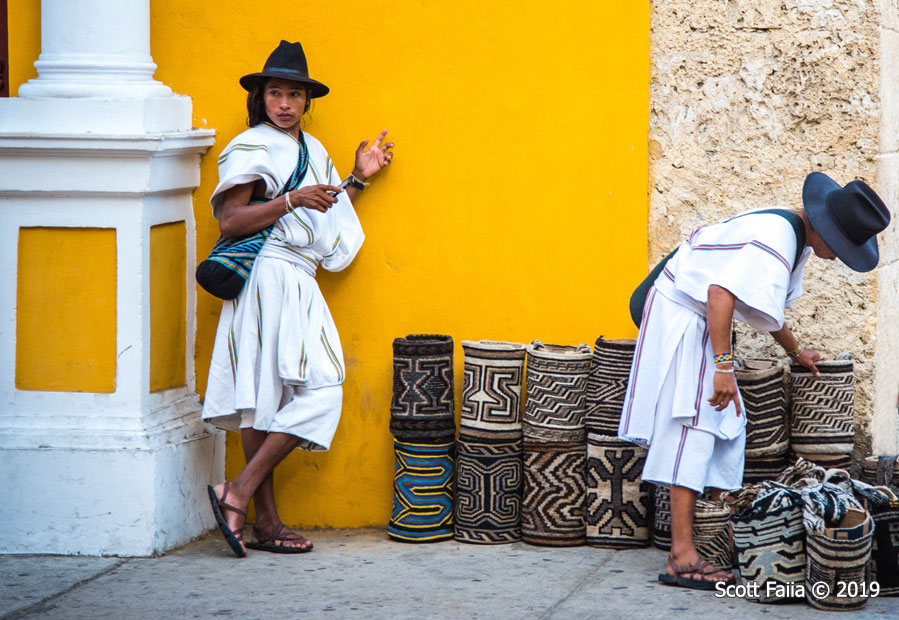 Colombia
In the Sierra Nevada Mountains of coastal Colombia, indigenous communities still thrive in the remote highlands of the world’s highest coastal mountain range. Descendants of the pre-Colombian Tairona peoples who were nearly exterminated by Spanish colonization, they maintain their traditional dress and crafts, which they sell in Cartagena's markets. Calling themselves the Elder Brothers, and guardians of the Earth, their spiritual practice focuses on maintaining the ecological and spiritual equilibrium of their mountain home.
Scott Faiia © 2019
PCV Malaysia 1973–1975
Irrigation Engineering

Short Walks from Bogotá: Journeys in the New Colombia
By Tom Feiling

Summary:
For decades, Colombia was the "narcostate." Now it's seen as one of the rising stars of the global economy. Where does the truth lie? How did a land likened to paradise by the first conquistadores become a byword for hell on earth? And how is it rebuilding itself after decades of violence? Writer and journalist Tom Feiling has journeyed throughout Colombia, down roads that were until recently too dangerous to travel, talking to people from former guerrilla fighters to nomadic tribesmen and millionaires. Vital, shocking, wry, and never simplistic, Short Walks from Bogota unpicks the tangled fabric of Colombia to create a stunning work of reportage, history and travel writing.

About the author:
Tom Feiling spent a year living and working in Colombia before making Resistencia: Hip-Hop in Colombia, which won numerous awards at film festivals around the world, and was broadcast in four countries. In 2003 he became campaigns director for the TUC's Justice for Colombia campaign. His first book was The Candy Machine: How Cocaine Took Over the World.

Editorial Reviews
"Creates a portrait of Colombia that is perceptive, unsensational, and full of humanity. . . Feiling is a brilliant reporter, lucid, unflinching, morally engaged, and with an occasional deadpan sense of humour. . . one of the most consistently intelligent and compelling books to have appeared on any South American country in recent years."

"Tom Feiling takes us on an enlightening journey through a changing country that few understand."

"A deeply political account of one man's journey to the violent heart of modern, rural, Colombia. . . a must read."

"The best British travel writers like Norman Lewis or Bruce Chatwin give the reader more than simple travelers’ tales. Feiling is of their company. . . a brilliant, penetrating and highly readable account."

"Some of the best insights in the book come from the people Feiling meets, and memorably portrays. . . a well-written, thoughtful book."

Amazon Reader Reviews
The best contemporary book about Colombia
…Feiling knows his stuff. You may not agree with the politics but as you will soon gather this is no average book on Colombia, cutting away at general travel chaff—and there's a lot out there—Feiling explores the politics through personal interviews, in depth research and what can only be described as a profound understanding of Colombia and a love of its people.

Highly recommended
Very interesting and informative book that is easy to read and provides very good information about the recent history of Colombia and the current culture and flavor of Bogota and other unique areas around the country. I read it in preparation for my first trip to Colombia and felt very much up to speed on the culture and recent history of Colombia. Highly recommend.

Buy this and you won’t look back
If there's only one book you will read about Colombia, make sure this is it. It's an excellent read. I have never been to Colombia but I'm very interested in the culture and this book throws the windows wide open. The narrative follows the time-tested format of the travelogue and the author always maintains the delicate balance between personal story (the writer's inner journey) and the reality of the landscape and its people.

It's a personal, heartfelt and very astute observation of Colombia and its people. 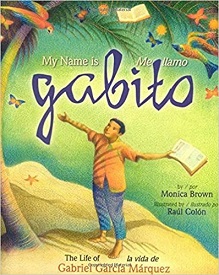 My Name Is Gabito/Me llamo Gabito: The Life of Gabriel Garcia Marquez
By Monica Brown; illustrated by Raul Colon

Summary:
Gabriel Garcia Marquez is perhaps one of the most brilliant writers of our time. Using the imagery from his novels, Monica Brown traces the novelist’s life in this creative nonfiction picture book from his childhood in Colombia to today. This is an inspiring story about an inspiring life, full of imagination and beauty.

Winner of the ALA 2008 Pura Belpre Award Honor for Illustration. Named Best Children and YA Books of 2007 by Criticas magazine.

Reader Comments
This title is perfect for young readers. I can’t think of a better way to encourage our children to take an interest in reading the works of one of the greatest authors of our time when they are old enough to do so. The pictures are fabulous, and the capture beautifully the world that García Márquez delivers in his novels and stories. The text in Spanish is a faithful and accurate translation of the English version, which is, unfortunately, not always the case with "bilingual" books.

Great twice. I bought this for my students in Spanish I and II. The fact that it is bilingual makes it less intimidating. The illustrations are wonderful and students get a sort of mini biography of someone important in Latin American literature. I use this and other picture books to facilitate reading and language comprehension while at the same breaking away from the textbook.

For native speakers it is not particularly difficult, as it is a children’s book, but for non-native learners the language used is a bit challenging at times. Which is where the bilingual part comes in really handy. It also helps for the intermediate learners, when illustrating that translation is not always 100% word-for-word. Overall this book is great just to read in English or Spanish and as a teaching tool. 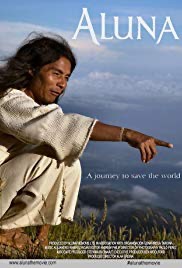 Summary: A feature-length documentary film made by and with the Kogi, a genuine lost civilization in Columbia, who are warning of the perilous situation of the Earth.

The Kogi felt the need to physically demonstrate the reality of environmental pollution in their physical environment and to show how easily critical interconnections within the natural world can be damaged or destroyed. They were keen to show that action at one specific site can affect other sites many miles away. For this film they learnt to use cameras so the film includes their own footage.

Watch as they walk along the invisible Black Line to explain how it connects a series of environmentally powerful 'hot spots' along the Caribbean Coast. Hear their own views and follow commentary from Western scientists about what is happening on the cost.

From director Alan Ereira: The Kogi once traded with Maya and Aztecs. Their civilization still survives hidden on Colombia's highest mountain. They believe they are guardians of the world. Their leaders are trained from infancy in darkness to work by connecting with 'aluna', a cosmic consciousness. They perceive 'black lines' that connect special sites essential to life. In 1990, convinced that we were destroying the earth, they sent a warning through a British film-maker and then withdrew. They have now concluded that we cannot have grasped the warning and they have to explain it better if the world is to survive. So they recalled the film-maker and instructed him to film their demonstration of these connections, using 400km of gold thread. So begins a truly bizarre journey. We see people who have no wheel or writing, who know nothing of our world, seriously discussing dark energy with a leading astronomer and correctly identifying objects seen by the Hubble telescope. (From IMDB.com)

"In my opinion, this movie gives us the immense opportunity to hear the critical message from ALUNA, meaning our Great Mother. ALUNA the movie is for people who are concerned about the status of the world, that want to do their part to help our environment and are interested to recover their spiritual nature and consciousness for harmony and balance.”

Aluna, A Journey to Save the World, is an important feature-length documentary film made by and with the KOGI, a genuine lost civilization in Columbia, in which they dramatically warn of our perilous situation on planet earth. The Kogi live hidden on an isolated triangular pyramid mountain in the Sierra Nevada de Santa Marta, Colombia, nearly five miles high, on the Colombian-Caribbean coast.

The Kogi believe that they live in order to care for the world and keep its natural order functioning and out of concern for our seriously deteriorating situation on our planet they emerged in 1990 to work with Alan Ereira and made their first film, a documentary for BBC1, "From the Heart of The World: the Elder Brother's Warning" (1990). The first documentary showed the Kogi emerge to offer their concern for people of the modern world who are urged to change their ways or suffer environmental disaster.

Their first film had a stunning global impact, and is now probably the most celebrated film ever made about a tribal people. It helped shape the Rio Conference, it led to the King of Spain visiting the Kogi and to a complete transformation of the Colombian attitude to these people. Today, each new Colombian president has to visit the mountain and seek their blessing.

But now the Kogi have summoned Alan Ereira back to say that we did not actually listen to what they said. They now understand that we learn through our eyes, not our ears. In the face of the approaching apocalypse, they have asked Ereira to make a film with them which will take the audience on a perilous journey into the mysteries of their sacred places to change our understanding of reality. This is not a work of fiction. ARE YOU READY TO BE CHANGED?