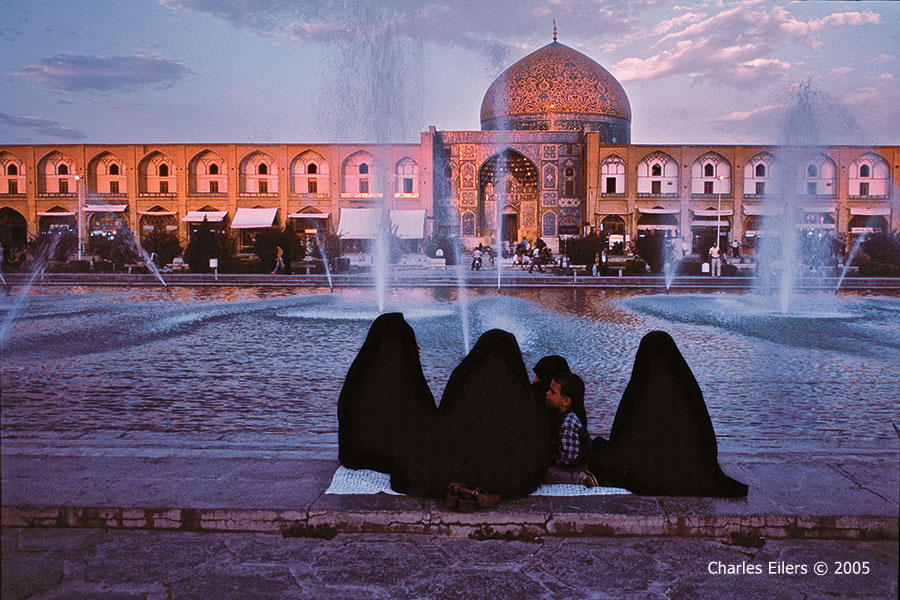 As the day cools, people fill Isfahan’s Imam Square to shop, stroll, enjoy a carriage ride, or just sit by the fountain. Glowing in late afternoon light, Lotfallah Mosque is Isfahan’s architectural jewel. The surrounding arcade houses carpet, spice, and tea shops, while the sublime minarets of the Imam Mosque, the royal pavilion, and the bazaar portico complete the square. This vast city square built by Shah Abbas I was his 17th century capital and is today a UNESCO World Heritage Site. 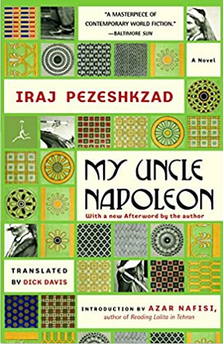 Summary:
Set during the Allied occupation of Iran during World War II and narrated by a lovelorn young man living among a vast cast of eccentric relations under the roof of the family’s tyrannical and increasingly unmoored patriarch, who also happens to be the father of the narrator’s beloved, My Uncle Napoleon is considered one of the most popular and influential pieces of 20th -century Persian literature. In 1976, a multi-episode series based on the novel became a runaway hit on Iranian television. Banned after the Revolution, both the novel and its adaptation remain underground favorites.

“Let us imagine we are in the process of creating a much-needed reading list for experts and analysts on Iran. I would put My Uncle Napoleon in a cherished place very near the top. One reason for this choice is that it is a great read. More pragmatically, I believe this novel provides its readers - in a delightful and deliciously politically incorrect manner - with many important insights into Iran, its culture and traditions, its present conflicts and past history, as well as its paradoxical relation to the west.” (Azar Nafisi, The Guardian)

“a love story enfolded in a bildungsroman and wrapped in a conspiracy theory” (Christopher Hitchens, quoted in the AP’s obituary of Pezeshkzad, January 14, 2022)

“... one of Iran’s great literary figures – Iraj Pezeshkzad – whose subtle yet powerful satire is an enduring window onto Iranian culture,” (Simon Shercliff, UK Ambassador to Iran, Tribute on Twitter, January 2022) 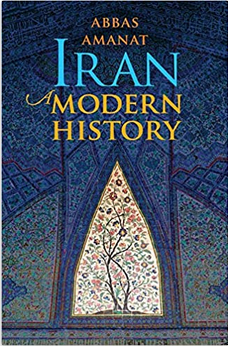 Summary:
This richly documented history of Iran from the 16th-century Safavid Empire to today’s Islamic Republic looks at the country both chronologically and thematically, paying special attention to the 20th century, political history, and to developments that contribute to our understanding of today’s Iran and its place in the world.

“A meticulously researched account of the past 500 years of Iranian history, beginning with the rise of the Safavid dynasty and the entrenchment of Shia Islam and its clerical establishment into the Persian ruling classes. Amanat spent two decades writing his book, not only tracing historical tales of political intrigue but also delving into Iran’s shifting position in imperial geopolitics. In so doing, he attempts to draw meaning from this history by looking for parallels between Persia’s unstable Safavid past and Iran’s current theocratic regime.” (Nazanine Hozar, “Top 10 Books about Iran” The Guardian, May 13, 2020)

"The defiant spirit of [Iran] is brought to life in this monumental history of the past 500 years." (Richard Spencer, The Times [London])

"A majestic work that goes a long way in unraveling . . . the country's enigmas and apparent contradictions." (Ervand Abrahamian, New York Review of Books) 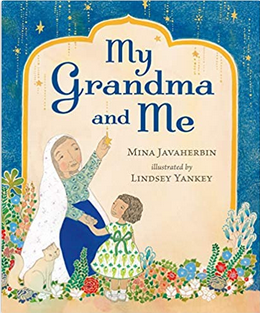 My Grandma and Me
By Mina Javaherbin, illustrated by Lindsey Yankey

Summary:
A true tale of Mina and the special relationship she shared with her grandmother. When Mina is growing up in Iran, the center of her world is her grandmother. Whether visiting friends next door, going to the mosque for midnight prayers during Ramadan, or taking an imaginary trip around the planets, Mina and her grandma are never far apart. At once deeply personal and utterly universal, Mina Javaherbin’s words make up a love letter of the rarest sort: the kind that shares a bit of its warmth with every reader. Soft, colorful, and full of intricate patterns, Lindsey Yankey’s illustrations feel like a personal invitation into the coziest home, and the adoration between Mina and her grandma is evident on every page.

REVIEWS:
This sweet story is intermingled naturally with details about Iranian and Islamic traditions and values and supported by such visuals as an easy mix of traditional and Western attire and thoughtful inclusion of Persian design elements. It peaks in a moment of solidarity between the two grandmothers, each praying for the other to go to heaven, but via their different Muslim and Christian religions: a poignant, inclusive note. In its celebration of specific manifestations of universal love, this is highly recommended for families and educators, Muslim and non- alike, looking to teach children about Islam. A deep and beautiful book modeling grandmothers as heroines. —Kirkus Reviews (starred review)

This book offers both windows and mirrors into a warm and loving familial relationship and will be appreciated by a wide range of young readers. A lovely book for anyone looking for intergenerational stories for one-on-one or group sharing. —School Library Journal (starred review)

Yankey’s mixed-media illustrations will transport readers to an idyllic twentieth-century Iran, recalling the style of Persian art, with dusty, muted colors and intricately patterned rugs...While this book presents a relationship in a specific cultural context, a subtle message of interreligious peace and unity shines through, supported by the memories’ emotional universality, through which young readers will learn empathy and cultural understanding. —Booklist 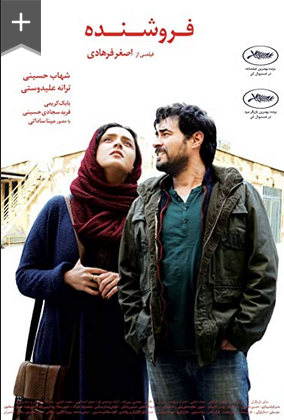 Storyline:
Forced to leave their collapsing apartment building Teheran, Ranaa and Emad, an Iranian couple who happen to be performers rehearsing for Arthur Miller's "Death of a Salesman," rent a new apartment from one of their fellow performers. Unaware of the fact that the previous tenant had been “a woman of ill repute,” having many clients, they settle down. By a nasty turn of events one of the clients pays a visit to the apartment one night while Ranaa is alone at home taking a bath and the aftermath turns the peaceful life of the couple upside down

VIEWER COMMENTS:
10/10 A True Gem
necid-70967 24 October 2016
Masterfully shot in Teheran, the film follows the ill fortunes of a theatrical married couple who, while rehearsing Miller's play Death of a Salesman, find themselves having to abandon their crumbling apartment and to seek alternative accommodation. The film is openly an allegory about social, urban and marital decay. But way beyond it, it is about the costs of masculine pride. By far more than a very good 'Iranian film', this is a superb statement about the unbearable consequences of trying to live up to codes of honour that centre on the female body. In my opinion, actress Taraneh Alidoosti is the hero of the film, both in her performance and in the role she occupies in the script. In contrast to appearances, she is the mover of everything that takes place in this fantastic film. A cinematic poem and a masterpiece in unfolding the twists of human psychology. 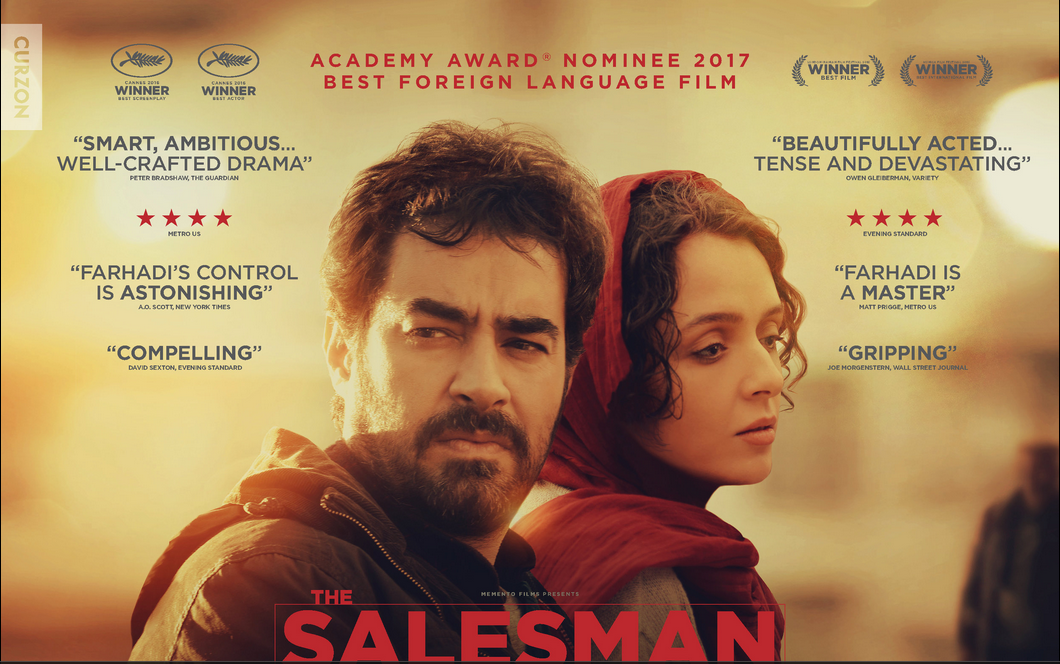 8/10 Farhadi does it again, in showing us another Iran
gizmomogwai 28 February 2017
Warning: Spoilers
Asghar Farhadi's films A Separation (also Oscar gold) and About Elly (not Oscar-recognized, but pretty good nevertheless) were shocking films. Not just for their stories- Farhadi does excel in intense and gripping drama with a touch of mystery to them- but for the face they put on Iran, very different from what many viewers go in expecting. Where are the cries for jihad? The outcry against Great Satan? The plots to wipe Israel off the map? The burning people in the street? Why are they living in apartments and homes and not caves? Farhadi certainly does give us more of that here. Early on, we hear a cell phone go off with a very familiar ringtone, and the protagonists are performing Death of a Salesman. You might think the US is banning these people for a reason, but Farhadi's films show us that, apart from a big difference in government, Iranians themselves are like people anywhere. Substitute "Muhammad" for "Jesus" and "Koran" for "Bible" and his films could be set in Kansas or Mississippi.

As for the "intense and gripping drama with a touch of mystery" part, The Salesman also delivers once again. This touches on the issue of violence against women, with the protagonist trying to uncover who assaulted his wife. But the film also deals, in a very human way, with the trauma his wife lives with in the aftermath. There is intensity in the climax- is there going to be revenge? The Salesman is no tasteless rape-and-revenge movie; it's a finely crafted drama that can be different things at once.

6/10 35 years of love or betrayal?
Norman1718 20 September 2016
I loved how this movie had some women characters that shows the exact situation of Iranian women. The old lady: "Oh...thank god you are alive. Thank you for saving him. He is my everything. I can't live without him." These are the words of an old lady in a 35 year-old marriage toward his husband which has been cheating on her for 3 years! How dumb is she!? It's the story of many women in Iran which because of their situation should obey their husbands and love them blindly. Raana: She has been raped but she doesn't have the courage to sue also she is so embarrassed that this may become a discredit to her. The prostitute: Imagine A mother with a young daughter what should she do for a living?Nothing in a society specified for Men but to sell her body to those Men! And finally the woman in the taxi: This woman knows the situation of all the women above. She is now a women who had lost her trust to all men.Either something happened to her or to her friends she now sees men all like together. She's so paranoid that she doesn't see that Emad is doing nothing.