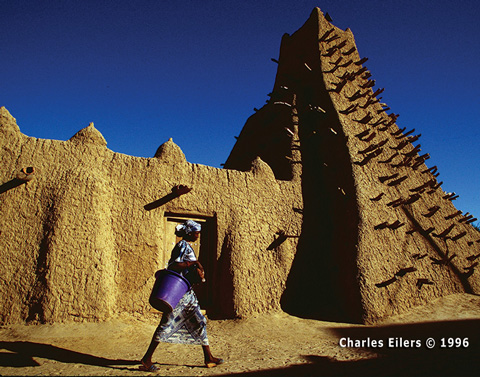 Returning from Timbuktu’s grand marché, or market, a Malian woman strides past the historic Sankoré Mosque, one of three mosques with madrassas—centers of learning—that made up the renowned University of Timbuktu. Founded in 989 C.E., Sankoré’s reputation as a center for Arabic studies and sciences grew, and the growing university flourished during the 1300s. Timbuktu’s medieval manuscript legacy comes from the Sankoré library, where scholars created hundreds of thousands of manuscripts on Islam and other subjects. Through the heroic efforts of Timbuktu’s citizens, both the mosque and books survived the jihadi occupation of the town in 2012.
–Charles Eilers © 1996
PCV Nigeria and Ethiopia 1966–1969
Teacher Training 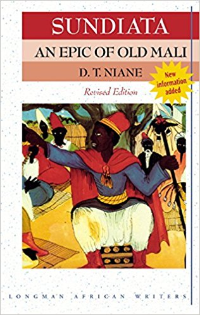 Summary:
This is a revision of Sundiata: An Epic of Old Mali, a bestseller for 30 years.
Retold by griots, the guardians of African culture, this oral tradition has been handed down from the thirteenth century and captures all the mystery and majesty of medieval African kingship. It is the epic tale, based on an actual figure, of Sundiata (Sunjata). Part history and part legend, it tells how Sundiata fulfilled the prophesies that he would unite the twelve kingdoms of Mali into a powerful empire.
This Revised Edition includes background information which provides a geographical, religious, social, and political context for the story. A ‘who’s who of characters’ and ‘a glossary of places’ will enhance the reader’s experience.

About the Author:
Born in Guinea, author and playwright Djibril Tamsir Niane is a descendant of griots—African oral historians/storytellers. He translated Sundiata, as told by the griot Djeli Mamadou Kouyate, into French under the title Soundjata ou Epoque Mandiginue in 1960. It was later translated into English by G. D. Pickett in 1965. 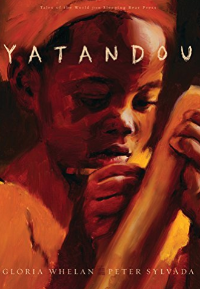 Eight-year-old Yatandou helps the women of her Mali village raise enough money to buy a machine that will replace their pounding sticks.

Summary (Rotten Tomatoes): Not far from the ancient Malian city of Timbuktu, now ruled by the religious fundamentalists, proud cattle herder Kidane (Ibrahim Ahmed aka Pino) lives peacefully in the dunes with his wife Satima (Toulou Kiki), his daughter Toya (Layla Walet Mohamed), and Issan (Mehdi Ag Mohamed), their twelve-year-old shepherd. In town, the people suffer, powerless, from the regime of terror imposed by the Jihadists determined to control their faith. Music, laughter, cigarettes, even soccer have been banned. The women have become shadows but resist with dignity. Every day, the new improvised courts issue tragic and absurd sentences. Kidane and his family are being spared the chaos that prevails in Timbuktu. But their destiny changes abruptly in this stunningly rendered film from a master of world cinema. © CohenMedia