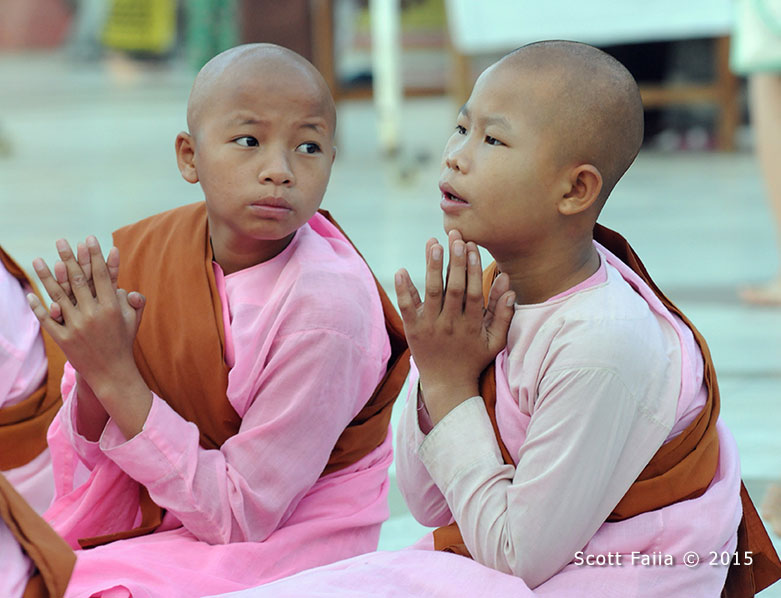 At Myanmar’s sacred Shwedagon Pagoda, young Buddhist nuns, distinguished by their pink robes and orange sashes, receive religious instruction from a senior nun. All Buddhist Burmese boys and many girls between the ages of 7 and 13 enter the monastery as novices for a period of a few weeks up to several months. Those who remain in the monastery will receive a free education, and their life’s work will be to make merit in the world through meditation, good deeds, and charitable actions.
– Scott Faiia ©2015
PCV Malaysia 1973–1975
Irrigation Engineering 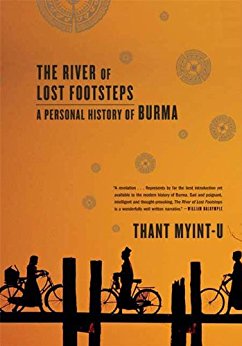 The River of Lost Footsteps: A Personal History of Burma
Thant Myint-U, 2008

What do we really know about Burma and its history? And what can Burma's past tell us about its present and even its future? For nearly two decades, Western governments and a growing activist community have been frustrated in their attempts to bring about a freer and more democratic Burma―through sanctions and tourist boycotts―only to see an apparent slide toward even harsher dictatorship.

Now Thant Myint-U tells the story of modern Burma, and the story of his own family, in an interwoven narrative that is by turns lyrical, dramatic, and deeply affecting. Through his prominent family's stories and those of others, he portrays Burma's rise and decline in the modern world, from the time of Portuguese pirates and renegade Mughal princes through a sixty-year civil war that continues today―the longest-running war anywhere in the world.

The River of Lost Footsteps is a work at once personal and global, a "brisk, vivid history" (Philip Delves Broughton, The Wall Street Journal) that makes Burma accessible and enthralling.

From Publishers Weekly Starred Review
Analysis of Burma has been "singularly ahistorical," Thant Myint-U (The Making of Modern Burma), a senior officer at the U.N., observes. With an eye to what the past might say about Burma's present status as a country in crisis, Thant Myint-U examines the legacy of imperialism, war and invasion. Recounting in a well-crafted narrative the colorful histories of Burmese dynastic empires from ancient times to the 18th century, Thant Myint-U then focuses on how, during the 19th century, the Burmese kingdom of Ava fought and lost a series of border wars with the British East India Company, culminating in a treaty that marked the beginning of Burma's loss of independence. Considering the country's longstanding global isolation in the context of its geographic and cultural singularity, Thant Myint-U interweaves his own family's history, writing extensively about his maternal grandfather, U Thant, who rose from humble origins to become secretary-general of the U.N. in the 1960s. Profiling 20th-century Burmese leaders such as Aung San, U Nu and Nobel Peace Prize–winning activist Aung San Suu Kyi, Thant Myint-U beautifully captures the complex identity of a little-understood country, concluding with a trenchant analysis of Burma's current predicament under an oppressive regime. (Dec.)

Copyright © Reed Business Information, a division of Reed Elsevier Inc. All rights reserved.
--This text refers to an out of print or unavailable edition of this title.

From Booklist
An international pariah for the past four decades, Burma has seen its profile, though not its military government's reputation, rise higher in recent years because of the saga of Aung San Suu Kyi, 1991 Nobel Peace Prize recipient. Thant contributes welcome context to her plight under house arrest, as well as to Burma's, writ large with this history. It reaches into ancient mists, establishing the origins of Burmese national traditions (in terms of revered places, admired kings, and Buddhism), and commences concretely with three wars that culminated in Britain's colonization of the country in 1885. Administratively part of British India, Burma regained some autonomy in the 1930s, but its nationalists, according to Thant, were inclined toward ideological extremism, with baleful effects: the founder of the military regime, Ne Win, sided with the Japanese invaders in World War II and in 1962 imposed a form of nationalistic socialism that suffocated the economy and isolated the country from the world community. This readable, reflective history will support revived interest in Burma

Gilbert Taylor
Copyright © American Library Association. All rights reserved
--This text refers to an out of print or unavailable edition of this title.

Two Burmese boys, one a Karenni refugee and the other the son of an imprisoned Burmese doctor, meet in the jungle and in order to survive they must learn to trust each other.

Summary:
The story of Aung San Suu Kyi, as she becomes the core of Burma’s democracy movement, and her relationship with her husband, writer Michael Aris.

“THE LADY is an epic love story about how an extraordinary couple and family sacrifice their happiness at great human cost for a higher cause. This is the story of Aung San Suu Kyi and her husband, Michael Aris. Despite distance, long separations, and a dangerously hostile regime, their love endures until the very end. A story of devotion and human understanding set against a background of political turmoil which continues today. THE LADY also is the story of the peaceful quest of the woman who is at the core of Burma's democracy movement.” Written by Europa Corp