Two novice Buddhist monks hurry along one of the seven terraces of the Hsinbyume Pagoda in Mingun, northwest of Mandalay—much as young boys likely have walked or run here for more than 200 years. Built in 1816, the pagoda consists of seven concentric ascending rings around a central stupa, representing the seven mountain ranges that surround Mount Meru, the sacred mountain at the center of the universe in Buddhist cosmology.

Languages Burmese (official), minority ethnic groups use their own languages 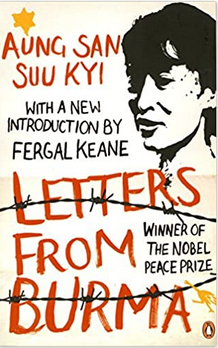 Summary:
Following her release from house arrest, the winner of the 1991 Nobel Peace Prize wrote these 52 short essays in the form of letters from late 1995 through 1996, at the height of a heroic period in her long resistance to Myanmar’s oppressive rule by military junta. Reissued the year of another release from extended detention, at a time of growing, albeit fleeting, optimism and belief in the spirit of reconciliation, the collection reflects her determination to reveal the cruel impact of that rule on the traditions and daily lives of the Burmese people and to propose pathways to a better future. 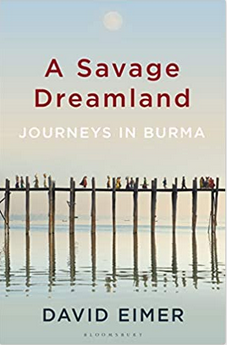 A Savage Dreamland: Journeys in Burma
By David Eimer

Summary:
Journalist Eimer, formerly the China correspondent and the Southeast Asia correspondent for major British newspapers, travels the length and breadth of Myanmar, seeking to dispel lingering colonially tinged assumptions about Burma/Myanmar by focusing on the voices of the country’s people. Within a rich historical context, he creates a mosaic-like view of a still mysterious land by sharing the stories of local people from all walks of life: rural and urban, members of diverse religions and ethnicities, the wealthy and privileged as well as the desperately poor.

“Eimer is a meticulous, fair-minded and empathetic observer, he takes interest in people of all kinds and from all walks of life, and is adventurous and curious enough to go off the beaten track. [...} One probably cannot understand Myanmar without going there, but Eimer’s book may be one of the best alternatives.” (Peter Gordon, Asian Review of Books, July 9, 2019)

“Eimer's journey takes him to all these trouble spots, including many not reported in the West. It's a remarkable achievement because most are off limits to tourists and especially westerners ... The result of Eimer's intrepid endeavours is a revelatory and moving book, enriched by vivid descriptive colour and an incredible cast of characters” (James Holland, The Times) "A descriptive look at a struggling country that squeezed itself into democracy after half a century of military rule ... Eimer gives Burma a voice by letting her people tell their stories." (San Francisco Book Review) 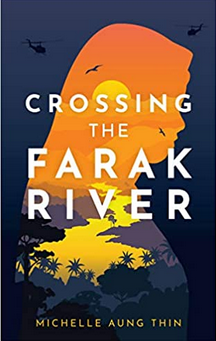 REVIEWS:
The author, aware that ethnic and religious divisions are easily sown by the media, ignorance, and fear, packs a great deal of information into this compelling story that will educate readers on a real, ongoing situation while also building empathy. —Booklist, 02/15/20

An urgent, timely narrative. —Kirkus Reviews, 03/02/20 Hasina is an engaging and interesting main character . . . Hasina puts a personal face on [political situation in Myanmar], helping readers both understand and empathize with the situation. Crossing the Farak River is . . . an amazing adventure set in an interesting and foreign environment with a memorable and admirable young woman as the protagonist. Highly recommended. —CM Reviews, *starred review, 02/14/20

Every moment of hope in the narrative seems to vacillate with a moment of despair, making Crossing the Farak River an engaging page-turner that also brings much-needed context and understanding to a country that for some 50 years had been considered a pariah state under military dictatorship. —Quill & Quire, 06/25/20 A must-purchase for all middle grade libraries focused on building a diverse collection featuring complex world issues and #OwnVoices authors. —School Library Journal, *starred review, 03/20 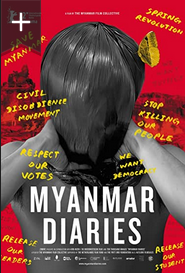 Summary:
How does it feel to be forgotten by the world? After the military coup in 2021, these film diaries of young opposition activists in Myanmar use the cinema screen to communicate with the world in a different way than allowed by TV news.

REVIEWS:
By Nick Holdsworth
FEBRUARY 17, 2022
You’ve all seen the extraordinary social media clip – a svelte young Burmese woman dances to loud music in an outdoor social media streamed aerobics class, unwittingly capturing a convoy of black SUVs driving up to a security checkpoint in front of Myanmar’s parliament in the capital Naypyidaw, as she unwittingly captures the first moments of the country’s dramatic military coup a year ago.

The clip – complete with its upbeat soundtrack – swells to a crescendo as she punches the air in time to the music, mirroring the scene unfolding behind. Apparently unaware of the convoy, little does she know that her country is about to plunge into a brutal and bloody crisis, driven by the greed and sheer evil of a kleptocratic military cabal, angered that the populace keeps voting against it in the general elections it has so graciously allowed since 1990.

The anonymous Myanmar Film Collective who – at considerable personal risk – shot Myanmar Diaries, open their powerful and poetic chronicle of a year of rising violence with the video.

It is the last innocently joyful piece of footage in the film.

Next, there are a series of smartphone clips that show how rapidly events spiralled from peaceful protest sparked by General Min Aung Hlaing’s power grab on February 1, 2021, to a brutal crackdown by the junta that has left at least 1,549 dead and more than 9,130 arrested, charged or sentenced since.

There is an utterly compelling sequence early on in this brief and balanced 70 minutes mixture of pure documentary and dramatised reconstructions based on true stories from the resistance. A 67-year-old woman stands alongside an open-backed truck in a city under martial law, fearlessly berating the young paramilitary police officers. They sat impassively behind the wood and steel bars that hold them back – for now. “You’re protecting the dictator!” she shouts, wagging her finger like a fierce school ma’am of old.