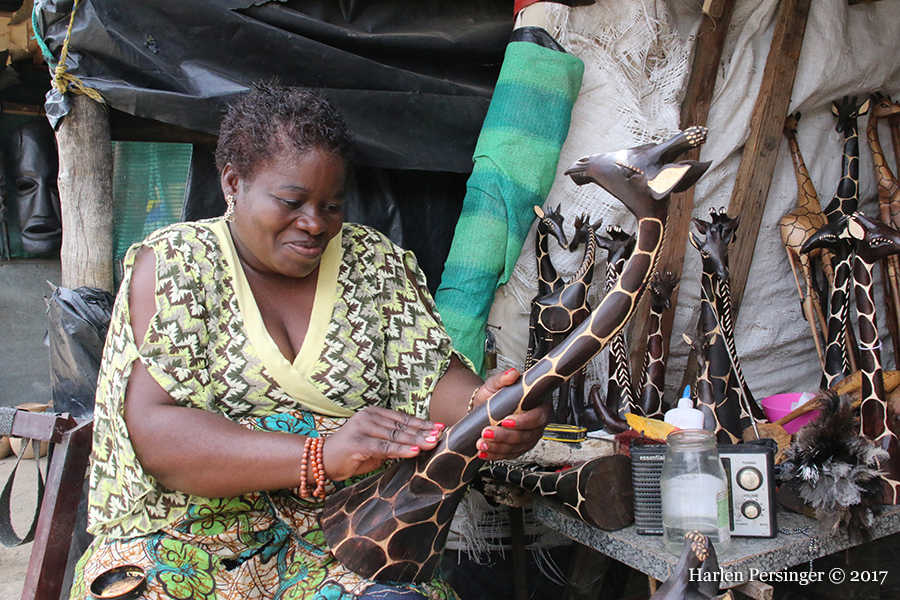 In the maze of open-air curio stalls at Namibia’s vibrant Woodcarver’s Cooperative market, artisans and vendors sell carvings of wild animals, jewelry, polished fruit bowls, and even canoes. Wild teak and rosewood carvings are traditional, but the imported Prosopis tree is heavy, strong, and readily available, and so is often used today. A hand axe, or ndjimbu, is used for both felling trees and shaping the end design, and it takes long hours, hard work, and precision to sculpt these treasured art forms.
Harlen Persinger © 2017

Languages Oshiwambo, Kavango, Herero, and Zambezi languages; Nama/Damara, Afrikaans (common lang. of most of the population and of about 60% of the white population), English (off.), other African languages 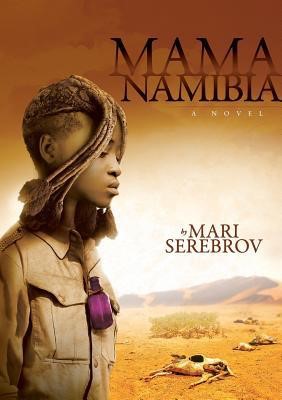 Summary:
Surviving on her own in the desert, 12-year-old Jahohora searches for her family while hiding from the German soldiers. It's 1904, and Germany has claimed all of South West Africa. Since the Herero would rather fight than surrender their ancestral homes, Gen. von Trotha has declared that they all should be forced into the Omaheke to die. Wasting away in the desert, Jahohora is about to give up her desperate struggle for life when she finds hope in a simple act of kindness from a Jewish doctor serving in the German army.

Editorial Reviews:
“… moving and compelling, heart-wrenching and hopeful.”
—The Namibian
“… a beautiful tale of perseverance and survival, and really an easy and enjoyable read!”
—Radio Wave
“This is a book of the love of family, the desire to live, resilience and getting a helping hand along the way. A must-read not only for those who want to know more about the history of the Herero people, but for everyone who loves a good novel.”
—Namibian Sun
“… standout historical novel … fascinating and heartbreaking narrative … by turns joyous and tragic … Mama Namibia is a heartwarming but wrenching story. ...”
—BioWorld Perspectives

This is a book I am passionate about, given that my son is currently living in Namibia where he is serving in the Peace Corps, but also because this is a chapter of history that has largely been ignored and of which many are ignorant. If that is true for you, as it was for me, I encourage you to read this well-written, engaging, and informative book about a shameful chapter from the past.
—Kelly
This is a very well researched historical novel that takes place in South West Africa, Namibia. The Germans are at war with the Herrero and the Nami tribes. The Herrero are cattle raisers. The cattle herd is their most important way of surviving. When the Germans arrive, they decide to steal the cattle and land of the Herrero. Also, it is important to exterminate the Herrero. It is hoped that a genocide will be successful. I had to brace myself for all the horrors these people endured. The main character is Jahohora. She loses most of her family in death as they try to escape their lands and head out to the desert. For two years Jahohora wanders alone. She depends on her strength to survive and her wisdom to survive every day without being murdered by the soldiers. Her journey is long and amazing.
Her journey is so long and slightly repetitive that I almost gave up on the novel. However, I am glad to have finished it. As I think about it, a true journey like this one for the sake of survival and not pleasure would be tedious and repetitive. Mama Namibia by Mari Serebrov is worth every bit of time a reader gives it. Along the way Jahohora meets a Jewish doctor whom she will meet again. He is very compassionate. This led me to think of hope while reading the novel. No matter how horrible mankind becomes in his thoughts to other humans there is always a remnant of good people left with the bad. I suppose this happens so that we don't give up hope in living life on earth with our fellowman. All races of people have good people populating the world.
Mari Serebrov, the author, on this journey made me think about, as written, hope as well as enduring love. As Yaakov, the Jewish doctor, fights to hold on while seeing man treat other people so brutally, he writes his wife. When he gets to go home from the battlefield, he seriously doubts that he will be the same man. It is all he can do not to lose his faith in his God as well as in man. He gives her the choice to go on with her life and not wait for him. He also has a little boy. This part of the novel is about what soldiers live through on the war front and what their families endure at home. While reading the novel, I was anxious to see what decision his wife would make.
I will never forget the Herrero. I will never forget Namibia or South West Africa. It is beautiful country. While reading I had the thought if not for man's vile deeds, Africa might be likened to the Garden of Eden. The flowers and animals are abundant. The people are cheerful givers. It is a rich land. This is Mari Serebrov's first novel. I hope she quickly writes another one. 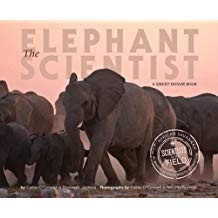 Photographs and text recount Caitlin O'Connell's experiences observing African elephants in their natural habitat of Etosha National Park in Namibia, describing the discoveries she made about elephant communication. 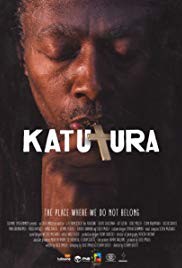 Summary: Katutura follows a group of characters experiencing the gravity of living in a Township, where dreams are poised to die. Ex-convict Dangi has to deal with living a law-abiding life, an extramarital son, and an old flame who his wife doesn't know about. Gangster Shivago explores a new market to sell his drugs and Kondja, a teenager in a wheelchair who helps street kids, falls in love for the first time. Their paths intertwine and their lives collide in both hopeful and brutal ways. Katutura deals with the struggle of everyday life in the township. There is crime, drug abuse, violence, but it also shows the strength of the community as well as the bustling creativity in the place, otherwise known as “the place where we do not belong.”