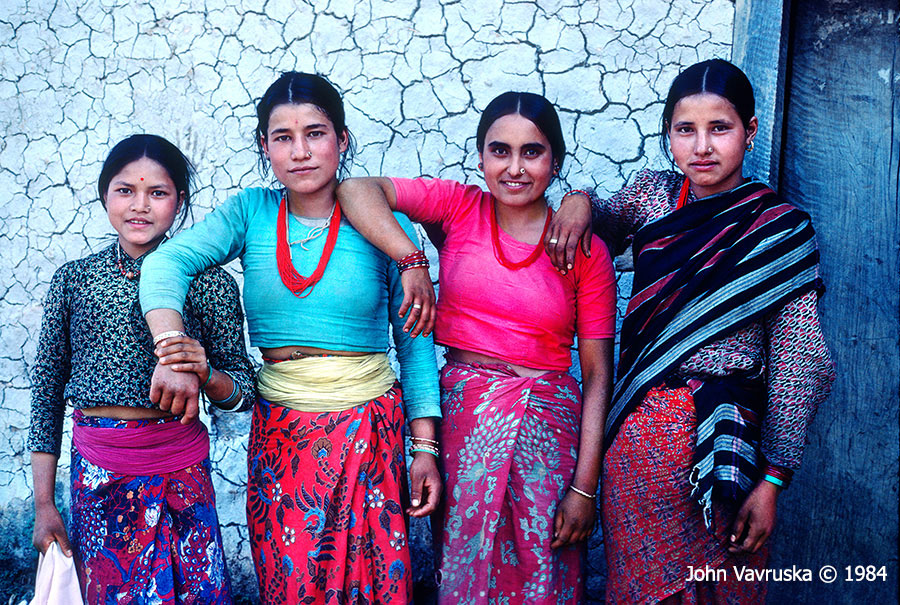 Four friends take a break from working their families’ terrace farms on the steep slopes of Nirmalidanda, a village in the hills of eastern Nepal. Subsistence farming is the mainstay of Nepali hill people, who grow rice, millet, corn, and wheat, plus vegetables and fruits. Between Nepal’s tropical lowlands and the arctic climate of the high Himalaya Mountains, the fertile middle hills are home to an ancient culture that has developed from Tibeto-Burman groups that migrated over the Himalaya and live alongside Indo-Aryan peoples who came up from India.
John Vavruska © 1984
PCV Nepal
1983–1984
Community Water Supply and Sanitation

Yak Girl: Growing Up in the Remote Dolpo Region of Nepal
By Dorje Dolma

Summary:
This unusual memoir immerses the reader in the fascinating story of a spirited girl in a remote, undeveloped region of Nepal near the border of Tibet. Life above 13,000 feet in northern Dolpo―often called the last paradise because of its breathtaking snow-capped peaks, untouched beauty, and hand-irrigated green pastures―was one of constant risk and harsh survival. In the 1980s, Dolpo had no running water, electricity, motor vehicles, phones, school, or doctors, other than the local lamas trained in the use of herbs and prayer.

Dorje Dolma's life centered around the care of her numerous younger brothers and sisters and the family's sheep, goats, and yaks. At age five she began herding and was soon taking the animals high in the mountains, where she fought off predatory wolves and snow leopards. Covering her first ten years, the story takes Dorje from her primitive mountain village to the bewildering city of Kathmandu, and finally to a new home in America, where she receives life-saving surgery.

With humor, soul, and insightful detail, the author gives us vividly told vignettes of daily life and the practice of centuries-old Tibetan traditions. She details the heartbreaking trials, natural splendors, and familial joys of growing up in this mysterious, faraway part of the world with its vanishing culture. The sharp increase in recent years of western trekkers to the area, and the introduction of modern communication and transportation, is causing rapid change in Dolpo. This wonderful and surprising tale of survival, loss, and self-reflection offers us entry to this difficult, yet magical, place.

Above all, this is the inspiring story of an indomitable spirit conquering all obstacles, a tale of a girl with a disability on her way to becoming a dynamic woman in a new world.

About the Author
Dorje Dolma was born in the remote Dolpo region of Nepal, high in the mountains bordering Tibet. She was the oldest of eleven children, only six of whom survived the harsh conditions of their lives. Dorje began herding the family's goats and sheep at age five and by seven she was defending them from attacks by wolves and snow leopards.

When she was ten, Dorje's parents took her on a month-long trek to Kathmandu to find help for a serious health problem she had. There they encountered Westerners who arranged to bring Dorje to the United States and get her the surgery she needed to save her life.

Adopted by her new American family, Dorje eventually graduated from the University of Colorado with a degree in Fine Arts. She now works as an early childhood teacher in Boulder, Colorado, and continues to develop her art. This is her first book.

Editorial Reviews
Yak Girl: Growing Up in the Remote Dolpo Region of Nepal is a vivid testimony of growing up and learning to survive in a harsh, rugged, yet astonishingly beautiful land. The author’s story includes a long and sometimes perilous journey, since her parents took her on a month-long trek to Kathmandu at age ten, followed by travel to the United States for surgery to save her from a life-threatening condition. A candid, true-life story of hardship, strength, family ties, and culture shock, Yak Girl is highly recommended. (Midwest Book Review, May 2018) 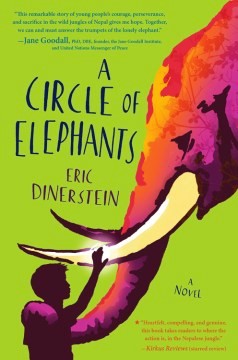 A Circle of Elephants: A Companion Novel
By Eric Dinerstein

Summary:
Thirteen-year-old Nanda Singh, the youngest elephant driver in Nepal, enjoys a very special relationship with his tusker, Hira Prashad, through which he grows in understanding and compassion with all animals, including humans

From the author of What Elephants Know, a 2017 ALA Notable Children’s Book and winner of the 2017 South Asia Book Award for Children’s and Young Adult Literature, comes this stunning companion novel about the complex relationship between people and nature coexisting in the Borderlands of 1970s Nepal. Dinerstein’s poetic prose and scientific expertise come together in this breathtaking tale that transports the reader to the center of dangerous conflicts and heartbreaking friendships.

Editorial Review
From School Library Journal
Gr 5–8—This companion novel to What Elephants Know takes place in the Borderlands of 1970s Nepal. In the new Royal Elephant Breeding Center, 13-year-old Nandu lives with his adoptive father. Nandu and Hira Prasad, the center’s powerful bull elephant, forge a bond when they experience an earthquake together. This moment sparks an emotional journey for Nandu as he comes to grips with the reality of the time and place: animal poaching. Nandu, the narrator, is able to relate to the characters in the story on a deep level, having experienced loss among his people and the animals that surround him. Powerful messages resonate throughout the novel, including kindness, empathy, and harmony among individuals practicing different faiths. These messages authentically come through in the actions and deeds of the main characters’ and their responses to some of the difficult events of the novel. The author deftly weaves his scientific knowledge with gentle prose to create a heartfelt tale. A glossary of important terms is a helpful reference for readers. VERDICT: Highly recommended and a must-buy where there are fans of What Elephants Know.—Selene Athas, Director of Libraries, Roland Park Country School

It is such a refreshing journey into another elephant world, very special to Asia, indeed Nepal, resonant with an afterglow of Mowgli, and Eric Dinerstein’s own deep feelings about the jungle, and the people and the wildlife that live there.—Iain Douglas-Hamilton, DPhil, CBE, founder, Save the Elephants, and coauthor of Among the Elephants

Readers Comments
Just over two years ago I read and reviewed What Elephants Know by Eric Dinerstein. It was a tremendously beautiful novel. Now Dinerstein is back with a follow-up, A Circle of Elephants.

Thirteen-year-old Nandu works for the Royal Elephant Breeding Center, a newly established program that houses and protects the royal elephants. The center in on the edge of the jungle, which is good for the elephants to have some native land nearby. But even with the protection of Nandu and the others at the Royal Elephant Breeding Center, the animals and humans alike will be challenged by nature and by men.

Poachers are getting more and more bold, killing rhinos and elephants in the area for their tusks, and even the Royal breed are potential targets for these men without morals. Among these men is a poacher with a personal score to settle with Nandu for the trouble he caused earlier (in the previous book).

As before, Dinerstein’s writing is so natural and casual that it is easy to forget that this is a work of fiction and not an actual journal of events. We can’t help but fall in love with the elephants and wilderness that Nandu clearly cares for. And because we’re brought into the story so nicely we also feel the same fear and concern when the animals are in danger.

This book has just a bit more of a didactic feel to it, as if the goal were to make sure we understand the real dangers for the animals, rather than telling a story and letting us recognize those dangerous as we go. Even so, this is too beautiful a book to ignore and I would love to make sure that every middle school student reads the adventures of Nandu—the world couldn’t help but become a better place if youngster could be brought into a world like this.

An Awesome Book: Nandu is a thirteen-year-old elephant drive who lives in the Royal Elephant Breeding Center in the jungle. The King’s elephants in the compound are protected in the stable. Nandu and his friends at the center are tested when an earthquake hits Nepal, which the locals deem to be a bad omen. Nandu and his elephant, Hira Prasad, have an unbreakable bond but, becomes strained when a series of event upturn their lives. Will Hira Prasad and Nandu be able to keep their bond? Is the earthquake a sign for more evil to come?

This novel was one of the best novels I have read this year (yes, the year did just start). The author wrote the novel so beautifully, that I felt transported to Nepal being surrounded by lush foliage and being there with Nandu. I love how the characters felt so real because they were flawed people trying to do the best with what they have. Overall, I love this book. 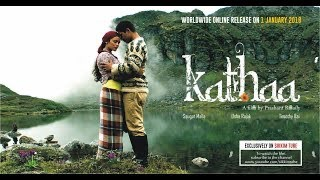 Summary: The story of Kaancha and Kumari.