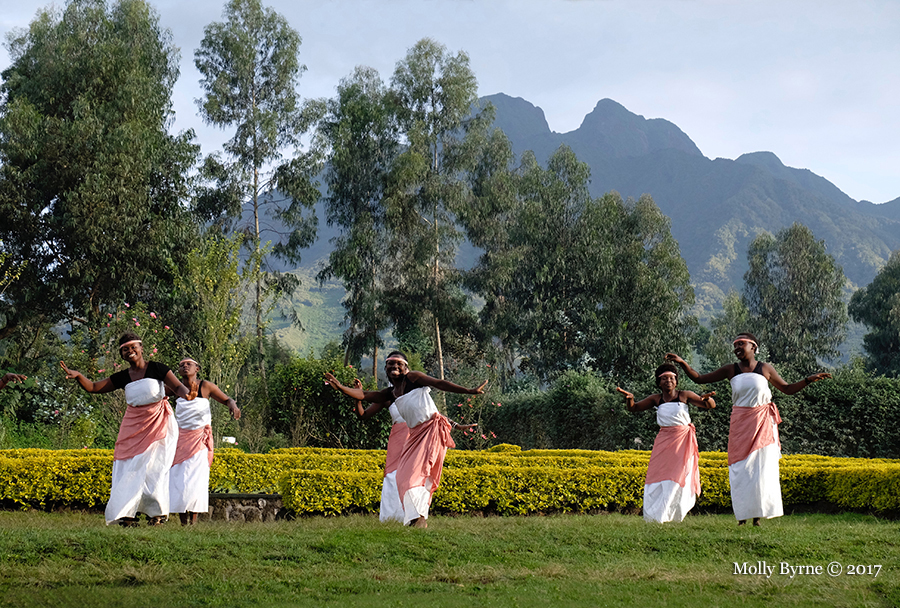 We gathered early in the morning in Rwanda’s Parc National des Volcans to embark on an adventure to see the magnificent mountain gorillas, the largest of the great apes, which are found only in their natural habitat in Central Africa. Little did we know that we would first be treated to a vibrant traditional dance performance that represents and honors Rwanda’s beloved cows. Beneath the misty slopes of the volcanic Virunga massif, it was a stunning beginning to an unforgettable day.
Molly Byrne © 2017
PCV Guinea 2005–2007/Madagascar 2007–2008
Small Enterprise Development

Summary:
In 1994, in Rwanda, a country in Central East Africa; genocide was perpetrated against Tutsis by some extremist Hutus. In less than 100 days, over one million (1M) Tutsis were exterminated—and my family perished among them. Eleven years old then, I became an orphan.
My life struggle started then, commemorating my lost family and the way they died, searching if any of my relatives survived, and fixing to earn everyday life as I did not hope for the future. This struggle took long. However, as time went on, I started gaining hope for the future. I first started thinking beyond myself, then about helping my fellow genocide survivors and finally about contributing to the reconstruction of my country in particular—and assisting to people of all generations in general.
My belief in God generated love, love brought me to forgiving people who killed my family, and forgiveness took me to making them my friends. Peace and forgiveness resulting from love is what I preach and this is what I wish for everybody.

Deogratias, A Tale of Rwanda (graphic novel)
By Jean-Phillippe Stassen

The harrowing tale of the Tutsi genocide in Rwanda, as seen through the eyes of a boy named Deogratias. He is an ordinary teenager, in love with a girl named Bénigne, but Deogratias is a Hutu and Bénigne is a Tutsi who dies in the genocide, and Deogratias himself plays a part in her death. Told with great artistry and intelligence.

Summary: In 1994, between April and July, the massacre of Tutsis and and moderate Hutus left one million dead. Instigated by Fest’Africa, a dozen African authors met four years after the events as writers in residence at Kigali, to try to break the silence of African intellectuals on this genocide.
In May 2000, on the occasion of the publication of series of works based on this experience, writers and artists from Africa and elsewhere gathered in Rwanda. Facing up to the scars left by the genocide, Samba Felix N’Diaye manages to find just the right sense of distance to film the inexpressible while nevertheless communicating a message of hope. Writers in the film include Boubacar Boris Diop, Véronique Tadjo, Benjamin Sehene, Nocky Djedanoum, Koulsy Lamko and Yves Simon, who all participated in a writer in residence program organized in Rwanda in May 2000 by the Fest'Africa literature festival based in Lille, France.