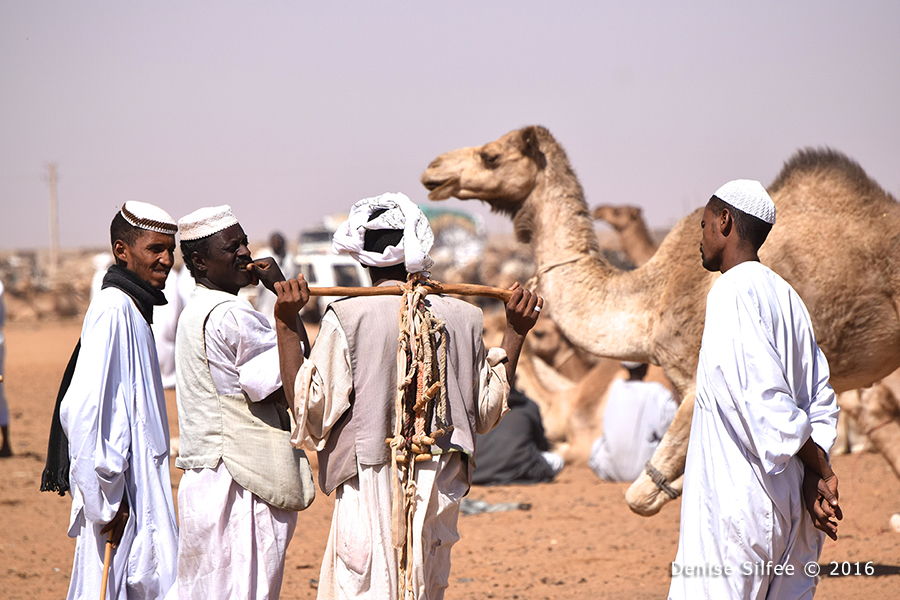 Rumored to be the largest livestock market in the world, the Al-Moheli Souk camel market on the outskirts of Omdurman is where camels are brought from all corners of Sudan to be traded and sold. Camels are sold in groups, and men negotiate price based on the type of camel and the work for which it is intended. Moving among the camels and other livestock spread over acres of empty desert, friendly traders eagerly show off their animals—even to visitors from abroad who won’t be making any purchases.
– Denise Silfee ©2016
PCV Thailand 2011–2013
Teacher Collaboration & Community Outreach 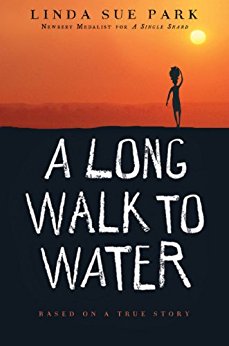 A Long Walk to Water: Based on a True Story
Linda Sue Park, 2011

A Long Walk to Water begins as two stories, told in alternating sections, about a girl in Sudan in 2008 and a boy in Sudan in 1985. The girl, Nya, is fetching water from a pond that is two hours’ walk from her home: she makes two trips to the pond every day. The boy, Salva, becomes one of the "lost boys" of Sudan, refugees who cover the African continent on foot as they search for their families and for a safe place to stay. Enduring every hardship from loneliness to attack by armed rebels to contact with killer lions and crocodiles, Salva is a survivor, and his story goes on to intersect with Nya’s in an astonishing and moving way.

After her tribal village is attacked by militants, Amira, a young Sudanese girl, must flee to safety at a refugee camp, where she finds hope and the chance to pursue an education in the form of a single red pencil and the friendship and encouragement of a wise elder.

Summary: Lost Boys of Sudan is an Emmy-nominated feature-length documentary that follows two Sudanese refugees on an extraordinary journey from Africa to America. Orphaned as young boys in one of Africa's cruelest civil wars, Peter Dut and Santino Chuor survived lion attacks and militia gunfire to reach a refugee camp in Kenya along with thousands of other children. From there, remarkably, they were chosen to come to America. Safe at last from physical danger and hunger, a world away from home, they find themselves confronted with the abundance and alienation of contemporary American suburbia.

One of the first African musicians to gain widespread international recognition, Hamza El Din is a Nubian master of the oud, the fretless lute. Western listeners are as likely as not to have been exposed to his work via the Grateful Dead, who played with him on-stage occasionally. (El Din also helped arrange the Dead's tour of Egypt.) He played an integral role in modernizing Nubian music, using his work to both evoke and tell stories of Nubian life.

El Din was originally trained to be an engineer, but changed direction and enrolled in the Middle Eastern School of Music, where he began to compose his own songs. On a fellowship to study Western classical music in Rome, he met American Gino Foreman, who exposed Hamza's work to Joan Baez and Bob Dylan. This resulted in a contract with Vanguard. His mid-'60s debut, Al Oud—Instrumental and Vocal Music From Nubia, was one of the first "world music" recordings to achieve wide exposure in the West.

In the second half of the 1960s, El Din spent much of his time in America. Taking a series of teaching positions in various American locations, he also found time to record a Nonesuch album in 1968, Escalay, that is considered one of the best documents of Nubian music. Eclipse is his most notable post-Escalay record, raising his profile in the U.S. when it was reissued on CD by Rykodisc. ALLMUSIC.