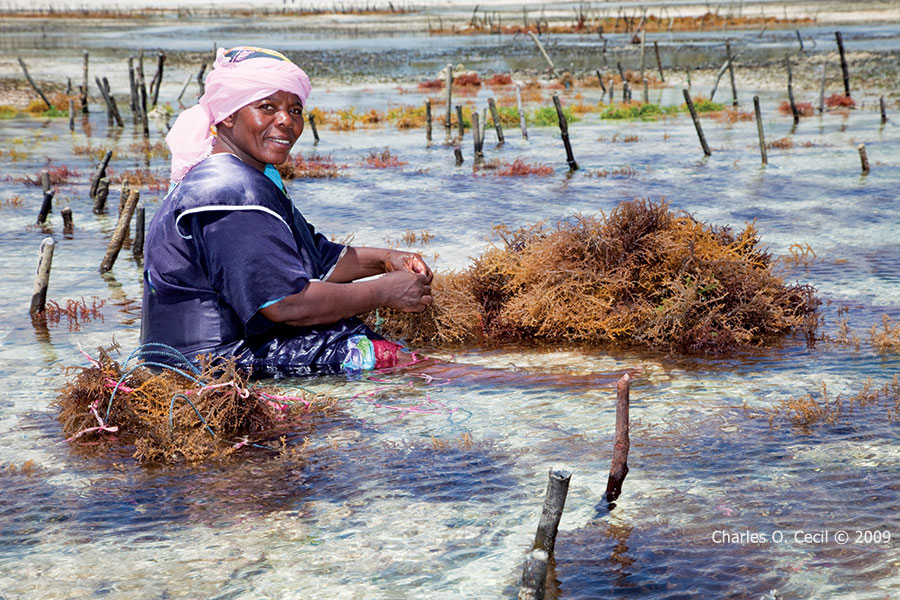 This woman tends her seaweed bed, located up to a mile offshore from Jambiani, in southeastern Zanzibar, and accessible only during low tide. Seaweed cultivation gives women increased independence by providing money for school fees, medical expenses, or local luxuries. Seaweed can be eaten as a vegetable and seaweed extract, or carrageenan, is used in food and personal care products. Seaweed exports are now Zanzibar’s third most important industry, after tourism and cloves. Unfortunately, rising water temperatures threaten to reduce harvests. 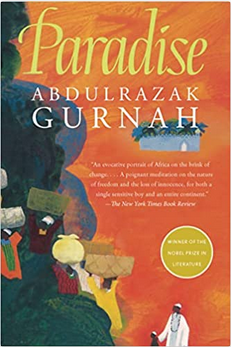 Summary:
Awarding Gurnah the 2021 Nobel Prize for Literature, the Nobel Prize Committee called Paradise his “breakthrough” achievement. The novel tells the story of a wide-eyed small-town boy as he leaves his childhood behind when, as payment for his father’s debts, he is sent to work as a servant to a wealthy merchant. Caught up in a complex, often corrupt world he could never have imagined, he witnesses events marked by violence and incompetence, all symptomatic of the plight of colonial East Africa on the eve of World War I.

"[Gurnah’s novels] recoil from stereotypical descriptions and open our gaze to a culturally diversified East Africa unfamiliar to many in other parts of the world." (Committee for Literature, Swedish Academy)

“An evocative portrait of Africa on the brink of change. . . . A poignant meditation on the nature of freedom and the loss of innocence, for both a single sensitive boy and an entire continent.” (The New York Times Book Review)

“Gurnah masterfully interweaves Yusuf’s story with the larger historical forces transforming the continent, all in a lush, seductive language that revels in its powers of storytelling.” (Los Angeles Times)

“A fascinating coming-of-age story and an indictment of the European colonization of Africa, with side ventures into African social and religious dynamics . . . warmly recommended.” (Library Journal) 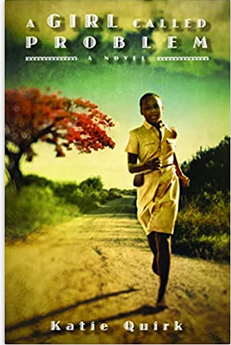 Summary:
Thirteen-year-old Shida lives in a small village in Tanzania. After the president encourages the people of his country to work together for all, the elders of Shida’s village choose to relocate to a new village. This can be good for Shida, who hopes to one day be a healer, since now she might be able to attend school.

REVIEWS:
Thirteen-year-old Shida, whose name means "problem" in Swahili, has been told all her life by her widowed mother that their family is cursed. When the elders of her village inform the residents of Tanzanian President Nayere's 1967 decree that they should move and share resources with a nearby village, Shida is excited for the change, thinking that she will finally have the opportunity to go to school and study under the village's nurse. Soon after arriving at the new village, however, troubling things begin to happen, and Shida's mother's belief in a curse seems more and more real. When tragedy strikes the family, surprising secrets are revealed, and the people must decide whether to remain in the new village or return to their land. Although the story has a slow start, readers will soon be immersed in the culture of this Sukuma village and will urge Shida on as she works hard to help her difficult mother and as she seeks the education that she will need to become a healer. Quirk strikes a good balance between traditional Sukuma tribal beliefs and more modern ideas about medicine and education. A glossary and help readers better understand the culture and setting in which the story takes place. Gr 6-9 —Sarah Reid / School Library Journal

“The ancestors don’t like girls going to school.” Is that why the crop is failing in 13-year-old Shida’s rural village in Tanzania in the late 1960s? Shida is thrilled to learn to read in her rough one-room schoolhouse, and her dream is to train with the village nurse. She is encouraged by her wise grandfather, Babu, an ardent follower of the adored new president, Nyerere, who supports women’s education and has freed the people from white colonialism. But many villagers, including Shida’s widowed, depressed mother and the boys in the classroom, are hostile to girls being educated and leaving the traditional ways. Who released the precious village cattle? Is someone poisoning the collective crops? Quirk spent two years in Tanzania, and this original paperback includes a detailed Swahili glossary with notes and photos. The young girl’s moving personal story brings close not only the intense battle over education and equality but also the basic struggle for the freedoms that come with running water, electricity, and medicine. Can Shida change her mother? Grades 5-9. —Hazel Rochman / Booklist

"Despite having penned this work of fiction as an outsider to the culture, Quirk's debut novel for children gives readers an intimate view of rural Tanzania in the early 1970s through details of daily life, folklore, family dynamics and spiritual beliefs. ...The novel offers a captivating introduction to Tanzanian life, culture and language (both Swahili and Sukuma), while the mystery of who has cast the 'curse' keeps readers intrigued. A mesmerizing read that expands young readers' worldview even as the pages turn." —Kirkus (starred review)

REVIEWS:
“... I thoroughly enjoyed this book. Katie Quirk told the story of so many girls. This was especially meaningful to me because I have had the opportunity to meet some girls like that. I have not been to Tanzania, but I have spent some time in West Africa, and the stories of the women there will shock you. There are so many brave girls, young and old. They are inspiring. I am so glad that there is a book to show the world that. While reading this book, I found myself thinking back to when I was 13 years old and how different my life was. Shida's story is not all sunshine and roses. There are some hard things to read in this book, but it was written so well that I could barely put it down.”

“It's a good book for 6th and 7th graders; there are so many things that they can learn from this book. Reading "A Girl Called Problem" would be a great way to start off a unit on other cultures and get the students interested in learning about other people and nations. ...”

“... There is so much in this story about the bravery, strength and ability of women. There is dissension in the village about girls going to school and doing anything other than getting married and having babies, but Shida and her cousin Grace prove that girls can and should be educated so they can pursue their dreams. Ah! Beautiful!

The verdict: top three reasons you should give this book to any middle grade girl you know:
1. Shida is a wonderful example of someone who has a dream and works hard to get it, even though she may struggle and want to give up at times.
2. This book is a fascinating and educational peek into African culture. The author actually lived in Africa for awhile and a lot of her experience informed this book. I loved the endnotes, pictures and glossary at the end of the book.
3. It is a mystery! For kids! And it’s fun! Is it just me, or are books about Africa usually about heavier fare such as slavery and war? While I think those books have their place, it is refreshing to read something fun. ...”

“A good addition to my East Africa reading! This one is middle-grade, and so a simplicity of voice is reflected accordingly, but it still tackles a number of important themes: child marriage, malaria awareness, village dynamics, magic and curses, need for education — and education for girls, specifically.

The story is set in Tanzania in its early days of independence (1967?), while the emerging nation is finding its footing, and how does that play out on a village level? It is a time of tremendous change, yet the stories and traditions of their people are an anchor. What do you hold to, and what do you release in the face of progress?

One thing I found unique is that while this book clearly demonstrates the value of education, medical training, access to medicine, etc, the author still treats their customs and traditions with respect. It seems like an “and” situation, rather than seeking to wipe out “backward beliefs” — at least, this is my perception. This is a middle-grade book, but not a missionary story.” 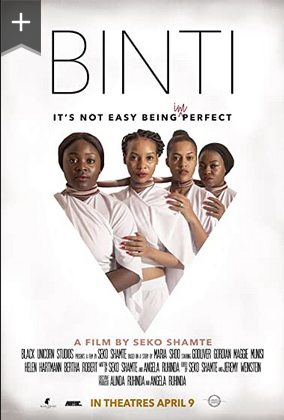 Summary:
Four Tanzanian women are unknowingly connected through their ability to persevere through extreme hardships in the city of Dar-es-Salaam. The film revolves around four contemporary women characters, Tumaini, Angel, Stella and Rose, told in four chapters.

REVIEWS:
The city of Dar-es-Salaam in Tanzania is the dwelling of these four women who persevere through life to realize their dreams and push through life’s difficulties. Black Unicorn Studios chooses a guerilla form of filmmaking, using the handheld camera as an overseer, fixing its eyes on the lives of the four women. This less formal form of filmmaking gives a very raw feel to the overall narrative and is often able to portray the battles of life for characters in a very realistic manner.
https://dmtalkies.com/binti-summary-review-2021-netflix-tanzanian-film-semo-shame/

The film does not offer solutions, instead leaving it to the audience to wrestle more with the problems faced by the women. In this respect she is like the great Italian film director Federico Fellini who in an interview said that he does not like to end his films with a “solution” to the moral problem of his protagonists, that he wants to leave the audience with the responsibility for seeing a solution (if there is one), otherwise, they are getting off too easily. What Seko Shamte leaves us with is the opportunity to wrestle with the concerns of three modern women.
https://readthespirit.com/visual-parables/binti-2021/

VIEWER COMMENTS:
“Wonderful gem.”
“I really enjoyed this film. Its refreshing to watch something with a bit of heart and head and no flashy effects or silliness. It's a simple and honest film that isn't pretending to be something it isn't. I thought the connections between each story, and the underlying narrative about the role and impact the male characters were playing in each woman's life, interesting and engaging.”

“Sometimes scenes were a little overwrought and it might have had better pace if the women's stories had been interwoven rather than linear. Maybe. And there were a couple of issues with continuity that were somewhat distracting. But an excellent movie in many ways.”

9/10 It's a perfect stuff from Tanzania
mwakasape12 January 2022
The best from Tanzania, well directed, the plot and dialogues at its best, without forgeting actors and actresses they have really give their all Watch this and you won't regret almost 2 hrs of a tremendous drama from Tanzania, this shows how much Tanzania movie industry move to the next step.

3/10 Wasted Effort
niaz_islam18 January 2022
The movie revolves around few women who are going through their own struggles with their life and how they finally cope with these struggles.

As the production budget was not huge viewer has to overlook some superficial things in the movie. The story was full of clichés which made the movie quite predictable and unenjoyable at the same time. It was felt that the screenplay failed to connect the audience to the story. Also the acting of the cast looked sloppy in the most part, had a lot of room for improvement.

7/10 Great Product From Tanzania / Excellent Acting
ayaanbhojani5 March 2022
Binti is a really good storical film from Tanzania that shows women's lives in different aspects, also the acting of all the 4 ladies is extraordinary. A great attempt in bongo land (First wonderful thing that Tz has actually showed by making a really great and well directed film), what doesn't go with the filmis its pace which is actually slow though keeps u hooked ... I rate it a 7.3/10 stars