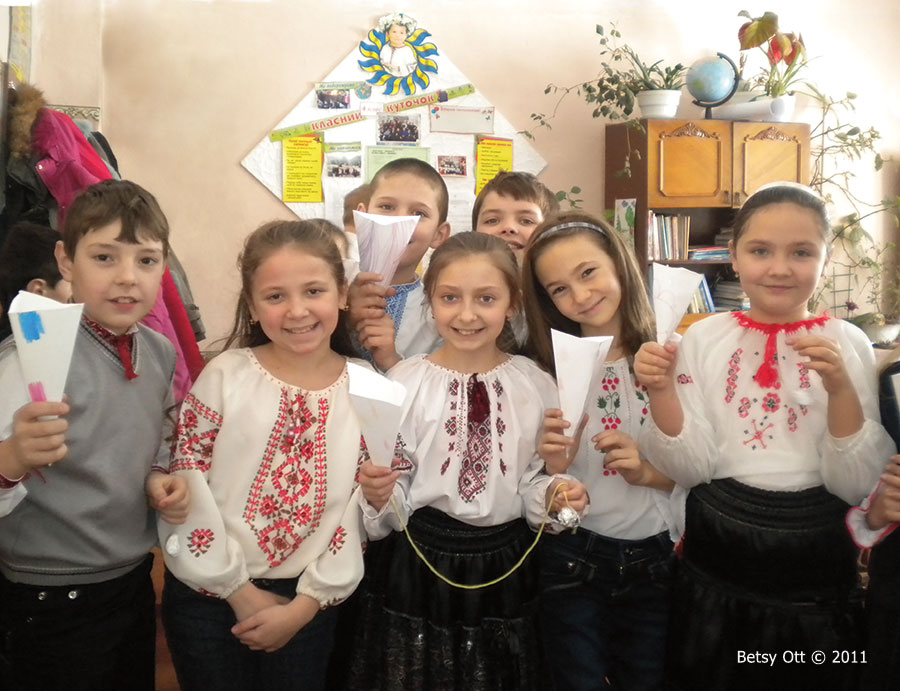 Ukrainians of all ages wear embroidered shirts, called vyshyvanka, as formal dress to mark important occasions. Vyshyvanka designs vary by region and are associated with different Ukrainian ethnic groups. In the western village of Skole, located in the Galicia region and populated by the Boyko and Hutsul people, vyshyvanka designs are primarily red and black and made up of geometric designs depicting flowers, berries, and other elements of the natural world. 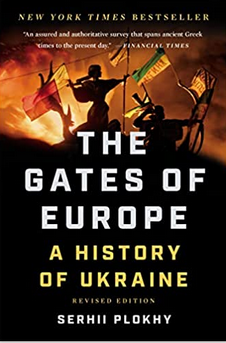 The Gates of Europe: A History of Ukraine
By Serhii Plokhy

Summary:
For centuries a meeting place of diverse peoples, cultures, religions, and armies, Ukraine has long served as a borderland, a gateway to both East and West. Covering the land’s history from the time of the ancient Slavs to today’s embattled sovereign nation state, award-winning historian Plokhy enlivens his narrative with portraits of key historical figures through the centuries.

“No one can understand today’s sad, tangled confrontation over Ukraine without some knowledge of the complex, crosscutting influences that have shaped eastern Europe over the millennia. For that history, readers can find no better place to turn than Plokhy’s new book. [...] Plokhy demonstrates a remarkable ability to untwist the dozens of trends, forces, and players marauding across this land and to take their measure in clear, compact segments. Ukraine’s history has always been contested, and never more intensely than now. Plokhy navigates the subject with grace and aplomb.” (Robert Legvold, Foreign Affairs)

“Complex and nuanced, refreshingly revisionist and lucid, this is a compelling and outstanding short history of the blood-soaked land that has so often been the battlefield and breadbasket of Europe.” (Simon Sebag Montefiore, author of Stalin: The Court of the Red Tsar)

"This is present-minded history at its most urgent. Anyone wanting to understand why Russia and the West confront each other over the future of Ukraine will want to read Serhii Plokhy's reasoned, measured yet passionate account of Ukraine's historic role at the gates of Europe." (Michael Ignatieff, Harvard Kennedy School of Government)

"For a comprehensive, engaging, and up-to-date history of Ukraine one could do no better than Serhii Plokhy's aptly titled The Gates of Europe. Plokhy's authoritative study will be of great value to scholars, students, policy-makers, and the informed public alike in making sense of the contemporary Ukrainian imbroglio." (Norman M. Naimark, Stanford University) 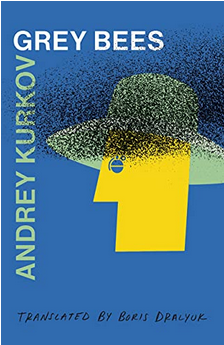 Summary:
In an otherwise abandoned village in the Donbas region’s neutral “Grey Zone” separating Ukraine’s defense forces from separatists and Russian soldiers holding the breakaway territory to the east, one of the two remaining residents, a retiree-turned-beekeeper, goes about living his largely apolitical daily life, often appreciating his bees more than his fellow humans. Long accustomed to the background sounds of bombs and gunfire, he almost takes them in stride. His bees, however, need a more peaceful atmosphere for their springtime pollen collecting, so he ventures out for his hives’ sake. As he wanders in both directions beyond the battle lines, he encounters separatists and loyalists, fighters and peace-seekers, often disarming them with his simplicity and kindness. He also makes a Crimean Tatar friend.

“Grey Bees is as timely as the author’s Ukraine Diaries were in 2014, but treats the unfolding crisis in a more imaginative way, with a pinch of Kurkov’s signature humour. Who better than Ukraine’s most famous novelist to illuminate and present a balanced portrait of this most bewildering of modern conflicts.” (Dublin Literary Award 2022 Longlist)

"Strange and mesmerizing . . . In spare prose, Ukraine's most famous novelist unsparingly examines the inhuman confusions of our modern times and the longing of the warm-hearted everyman that is Sergeyich for the rationality of the natural world." (John Thornhill, Financial Times)

"Sergey is at once a war-weary adventurer and a fairy-tale innocent . . . His naive gaze allows Kurkov to get to the heart of a country bewildered by crisis and war, but where kindness can still be found . . . Translated by Boris Dralyuk with sensitivity and ingenuity." (Uilleam Blacker, Times Literary Supplement)

“...a wistful elegy for a nation being slowly torn apart” (Publishers Weekly, February 7, 2022) 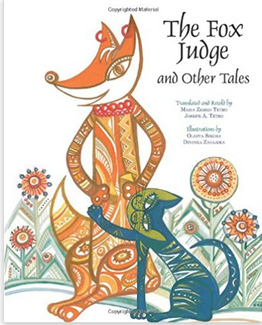 Summary:
Three Ukrainian folk tales featuring a sly fox whose interest in a food dispute leads to unexpected results; the friendship of three butterflies that endures when obstacles threaten, and how a gift from a spotted hen proves to be more precious than gold. Original illustrations by artists in Ukraine.

REVIEW:
“Librarians and aides at the Shevchenko Scientific Society of New York, the Ukrainian Institute of America, and the Palace of Art in Drohobych, Ukraine all assisted independent publisher, Winter Light Books, Inc. in researching archival sources for this book.

Ukrainian in origin, the three folk tales (retold and translated into English) are universal in theme and speak not only to all readers through the words written within the pages, but also speak to the imagination by way of the artistically colorful illustrations.

This book will enchant and enthrall all ages with its three tales translated and retold very aptly by Maria Zemko Tetro and Joseph A. Tetro. The folk tales are embellished with Ukrainian illustrations--vignettes and thirteen full-page illustrations in vibrant colors with Ukrainian motifs.

The publisher, Winter Light Books, Inc., is an independent children's book publisher specializing in children's folk stories and tales primarily from traditional Ukrainian sources. The beautiful illustrations are by Ukrainian artists Olesya Sikora and her daughter, Dzvinka Zagajska. Olesya is a graduate of the Lviv Academy of Art. She taught at the Little Academy of Art in Pidbuz and at The Children's Art School in Drohobych, Ukraine. Dzvinka is a student at the Lviv Academy of Art and a member of Plast (a Ukrainian scouting organization). Together, mother and daughter have collaborated on several projects, including books from KOLO, a children's book publishing company.” — excerpt of a review by Yaroslava Benko 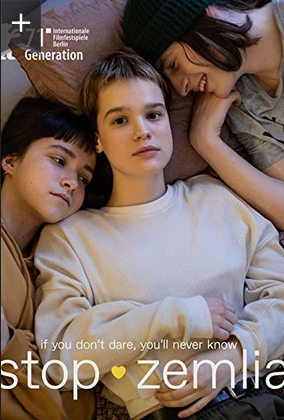 Summary:
16-year-old Masha, who sees herself as an outsider, is studying in an ordinary high school in Kyiv. Her close friends Yana and Senia share her non-conformist status and help her not to feel strange and detached. In addition to worry about future exams, Masha is forced to leave her comfort zone when falling in love with her classmate Sasha. She understands that if she does not dare to ask, she will never know whether her love for a guy is mutual. While focusing on Masha, the film also switches to the perspectives of Senia, Yana, and Sasha to offer a fuller picture of their lives and relationships.

From debut Ukrainian director Kateryna Gornostai, this is a deeply personal story about self- discovery and the patience it requires.

REVIEWS:
"The film convincingly covers a variety of important topics which appeal to us as young people. Platonic love, queerness, solidarity and psychological stress reinforce the effect of the film as an authentic coming-of-age story. By virtue of creative visualisation techniques, it becomes clear in an artistic manner how our generation dreams, feels and experiences life. The message is conveyed that it is part of life to face certain fears in order to be able to enjoy the most exciting years of youth" —Statement of the Youth Jury, Berlinale

"Gornostai’s strengths are also evident in her recreations of adolescent egoism" —Elizabeth Weitzman, The Wrap 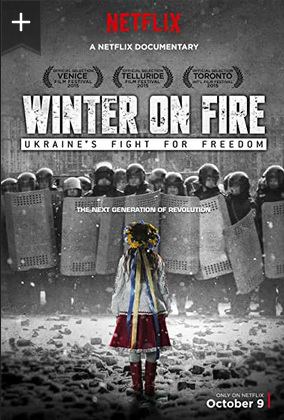 Summary:
Documentary about the Euromaidan protests: Over 93 days in Ukraine, from 21 November 2013 to 23 February 2014, what started as peaceful student demonstrations became a violent revolution and full-fledged civil rights movement.

REVIEWS:
Dan Fainaru of Screen Daily: "Consistently avoiding any attempt at political analysis, Afineevsky's cameras show ever-expanding crowds, young and old, men and women, Christians, Jews, Muslims, academics and proletarians, all united under the one common cause, the removal of a man who, in their eyes, embodied the concept of corruption. Often exasperated by the politicians who were supposed to represent them and who cheated them, these people were willing to die, if necessary, to achieve their goal, displaying an idealistic fervour (i.e. the joined support of all religions) rarely encountered in normal circumstances".

Eric Kohn from IndieWire: "Winter on Fire features the intensity of an action movie and the fury of a clear-eyed polemic. [...] An exciting montage of the developing crowd ends with close to a million protestors gathered together at the centre of town in a stunning act of defiance. [...] Despite the ongoing power of these scenes, Winter on Fire achieves its finest shot with a bird’s eye view of the Maidan protests, as thousands of activists push back against a black mass of officers and congeal into an insurmountable wall. With images like these, Afineevsky doesn't need to push the message about the protesters' durability; it's right there on the screen."

Jay Weissberg from Variety: "Winter on Fire is an "accessible film, with greater TV appeal, but it's also limited by its insistence on shoehorning everything into one perspective, albeit a perspective shared by the majority of Ukrainians."

AWARDS:
The film was nominated for an Academy Award for Best Documentary Feature and the Primetime Emmy Award in the Exceptional Merit in Documentary Filmmaking category. It was also one of the winners of the 2016 Television Academy Honors.