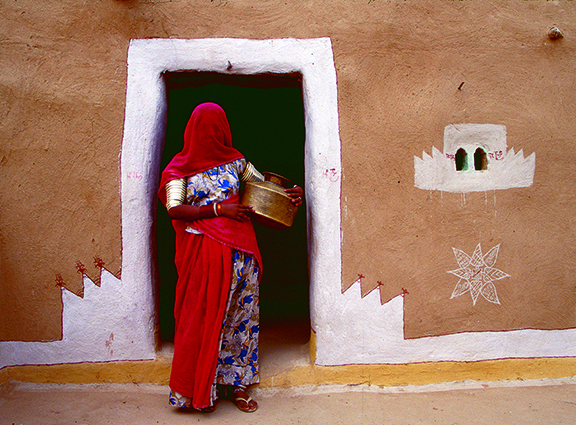 Framed by her kitchen door, a woman is on her way to collect water from the village's shared source. Villages like this one in the Thar Desert in Rajasthan are like wildflowers in the desert - clusters of color and design. Following village tradition, this woman has decorated the mud walls of her courtyard home with folk designs, or mandana, depicting auspicious symbols. The brilliant colors of her garments are typical of clothing worn by both women and men in Rajasthan. Despite much visual beauty, though, the task of collecting the family's drinking water remains an arduous part of a woman's daily life in the village.
– Charles Eilers © 2009
PCV, Nigeria & Ethiopia, 1966 - 1969 Teacher training 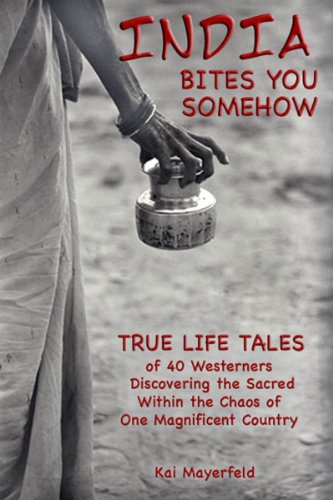 Book Description
A rollicking collection of true stories that take you deep into the heart of the magical, mysterious Indian experience. Forty people from nineteen countries share their journeys -- both worldly and sacred -- from the 1960s to the present. These narratives are moving, terrifying, hilarious, and awe-inspiring. 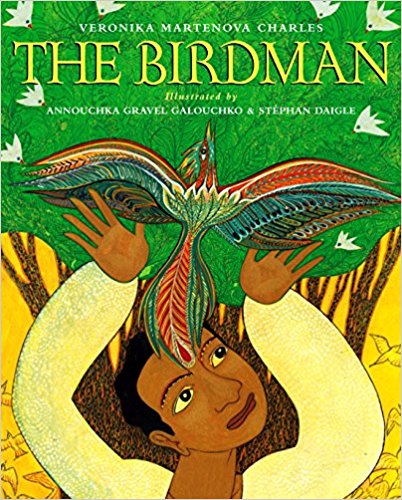 An anthology of 4 short films, celebrating 100 years of Indian cinema:

Sundance site description:  Widely considered to be the crown jewel of Kashmir, Dal Lake is a sprawling aquatic community where erupting political violence often distracts from the natural beauty. Gulzar, a young, working-class boatman, plans to skip town with his best friend in search of a better life, but a weeklong military curfew derails their departure. Forced to wait it out, Gulzar takes a job assisting a pretty scientist named Asifa. As they navigate the floating landscape, collecting water samples for an environmental study, an unlikely relationship blossoms between the two. When Asifa’s research reveals harmful pollutants, Gulzar realizes that the ecology of the lake and an entire way of life face an alarming threat, and everything in his own life begins to take on a new hue. Lush cinematography heightens the region’s visual splendor in this enlightening feature debut from Musa Syeed. Intricately weaving contemporary issues with traditional culture and ancient myths, Valley of Saints is a vibrant, lyrical film about finding one’s path home in a changing world.

NY TIMES: "At the 2012 Sundance festival, "Valley of Saints," an entry from India and the United States, won the World Cinema Audience Award in the Dramatic category. …The Sundance jury praised the film for its “brave, poetic and visually arresting evocation of a beautiful but troubled region, and for its moving, nuanced and accurate depiction of the relationship between a local boatman and a young woman scientist whose research challenges the status quo and offers hope for a restored ecosystem."

A romantic comedy-drama set in the 1970s, the film depicts the story of Murphy "Barfi" Johnson (a deaf-mute deaf man from Darjeeling) and his relationship with two women, Shruti and Jhilmil (who is autistic).

SYNOPSIS: His parents named him Murphy, but everyone calls him Barfi. Always ready with a prank, he's a charmer, especially with the ladies. In Darjeeling, Barfi is the talk of the town—even though he can neither speak nor hear. His bittersweet relationship with two beautiful young ladies sets in motion a chain of events that will turn his life upside down. A heartwarming tale of selfless love and about finding happiness in the smallest things in life.

Critics praised the performances, the direction, the screenplay, the cinematography, the music, and the positive portrayal of physically disabled people. The film was a major box-office success, becoming one of the highest-grossing Bollywood films of 2012 in India and overseas. The film was selected as India's official entry for the Best Foreign Language Film nomination for the 85th Academy Awards.

A coming-of-age romantic comedy film that had a mixed critical reception: The film received positive to mixed reviews from critics. Taran Adarsh of bollywoodhungama.com noted that the film "is a revitalizing take on romance and relationships. A wonderful cinematic experience, it should strike a chord with not just the youth, but cineastes of all age-groups." However, Shubhra Gupta of Indian Express stated "This is a been-here, seen-this, much-too-long glossy creature, and not much else".

Saibal Chaterjee of opined that, "Overlong, sluggish and fluffy, it meanders through varied locations as the young lovers/friends seek to reconnect with each other after a few years of being apart." Rajeev Masand of CNN-IBN concluded, "If you are seeking light-hearted mush, you're looking in the right place." Hindustan Times: "There is enough eye-candy in Yeh Jawaani Hai Deewani to see you through, but the film needs more meat and less dressing. Disappointing because there is a truckload of talent here. What rankles is what might have been."

Controversies: Jammu and Kashmir Chief Minister Omar Abdullah expressed displeasure over the attribution of shots to Manali when they were filmed in north Kashmir's Gulmarg. He stated that apart from the temple and Span resort, all scenes were shot in Gulmarg. Many scenes and song sequences of the movie were shot at various locations in the Kashmir Valley, including the famous ski-resort of Gulmarg and Pahalgam.

The Delhi High Court on 11 June 2013 issued a ruling restraining the TV release of the film for allegedly using objectionable dialogues in context of the brand Rooh Afza.

SYNOPSIS: The badlands of Bundelkhand in central India is a place of desolation, dust and despair. Yet it is hope that we find as we follow the pink sari-clad women of Gulabi Gang, who use words as weapons—demanding their rights, submitting petitions and haranguing corrupt officials. These women travel long distances by cart and tractor, bus and train, to wrest justice for women and Dalits, undeterred by sneering policemen and condescending bureaucrats. Their leader, Sampat Pal, is a rough-and-tough woman with a commanding personality. Despite her lack of education, she has evolved her own brand of feminism and egalitarian politics. Her strength lies in her words. Constantly on the move, one day she may be found investigating the suspicious death of a young woman, the next protesting against a corrupt official. The gang encounters resistance everywhere: whole villages connive in protecting the perpetrators of violence, but as the film pulls us into the centre of these blazing conflicts, it uncovers a complex story—disturbing yet heartening—as the fiery women of the Gulabi Gang empower themselves and take up the fight against gender violence, caste oppression and widespread corruption.

Salma is a story of rare achievement – a Muslim woman who writes her escape out of family servitude in southern India. The documentary of a woman telling her own story in her own voice in her own village is as poignant as it is simple.

SYNOPSIS: Salma was a young girl of 13 in her south Indian village, her family locked her up, forbidding her to study and forcing her into marriage. For 25 years, words were Salma's salvation. She began covertly composing poems on scraps of paper and, through an intricate system, was able to sneak them out of the house, eventually getting them into the hands of a publisher. Against the odds, Salma became the most famous Tamil poet: the first step to finding her own freedom and challenging the traditions and code of conduct in her village.

About Salma: Salma, at age 44 the protagonist of this film, is a distinguished poet in the Tamil language. Given to a young aunt as a child because her father wanted a son, she was returned to her birth parents at five, and confined at puberty according to local practice in a room with one barred window that she shared with a sister. Once she’s married off, her husband’s family keeps her inside their home, where she begins writing, locked in the foul toilet that the entire family used, with a hidden pen on paper ripped from a calendar.

After more than 20 years of confinement, her poems reach the outside world. A journalist publishes her photograph, and village elders are furious. It’s too late –Salma runs for local elected office and her writings find a public, but the status of women in the village has barely changed. “She’s a good girl, but she’s too clever,” says Salma’s father.

In this frank portrait of women’s life, shot without crescendos or drama, the practices from the past remain current, and the locals are unrepentant for their unchanged ways. So are Salma’s nephews and sons, who are indifferent to her poetry and defend the wearing of the burka and the ban of cinema.

At every turn the director uncovers evidence that past injustices still rule. We visit more than one wedding where a child bride is prepared for the first night with her arranged husband. Longinotto does not need to overplay these scenes, as a young girl shivering with fear prepares to exchange one master for a new one. To paraphrase Salma, “We have so much time, but no life.”

A Sadhu who renounced society adopts a baby renounced by society.

Indian filmmaker Pan Nalin travels to the biggest gathering on earth, the Kumbh Mela, and the result is a cinematic narration of encounters with remarkable people: a runaway kid, a Sadhu, a mother who has lost her son, a Yoga Guru who has found an abandoned baby, and a Ganja (cannabis) supplying Holy man. A meditation on time and faith expressed in words and images, "Faith Connections" tries to explore the power of devotion.

In Kanpur, India, a city with 15-hour power cuts, hundreds of people risk their lives to steal electricity, and an electricity thief provides Robin Hood-style services to the poor. Meanwhile the first female chief of the local electricity supply company has vowed to put an end to all illegal connections. In a summer of crisis, both come to terms with India's energy poverty.

As India, host of the 2011 World Cup of Cricket, begins its campaign to win the Cup after a 28-year drought, three ordinary Indians seek their salvation/escape from a difficult life through their passion for cricket: Sudhir, a penniless superfan who cycles across India to cheer the team; Prithvi, a 12-year old boy wonder who is a cricket prodigy; and Akshaya, a girl cricketer from Mumbai's slums. We follow Sudhir to see what drives the man who has renounced so much, including marriage, for his dream of cheering Team India forever; Akshaya as she competes in the trials for selection to the Mumbai Women's Team, and Prithvi as he copes with the unique pressures of being a cricket phenom in a cricket-crazy nation.

Blood Relative is a cinema verité documentary that follows the remarkable story of Indian activist Vinay Shetty, who is fighting to save two children who are dying from the rare disease Thalassemia. As a result of not being able to afford the life-saving medication, 14-year-old Divya and 24-year-old Imran have severely stunted growth and remain trapped in the bodies of children. Chronicling Vinay's battle against the Indian government to get Divya and Imran free medical treatment, the film gets unprecedented access into modern India's broken healthcare system. Caught in the middle are Vinay and the children he must look after who are bound together by ties stronger than blood. 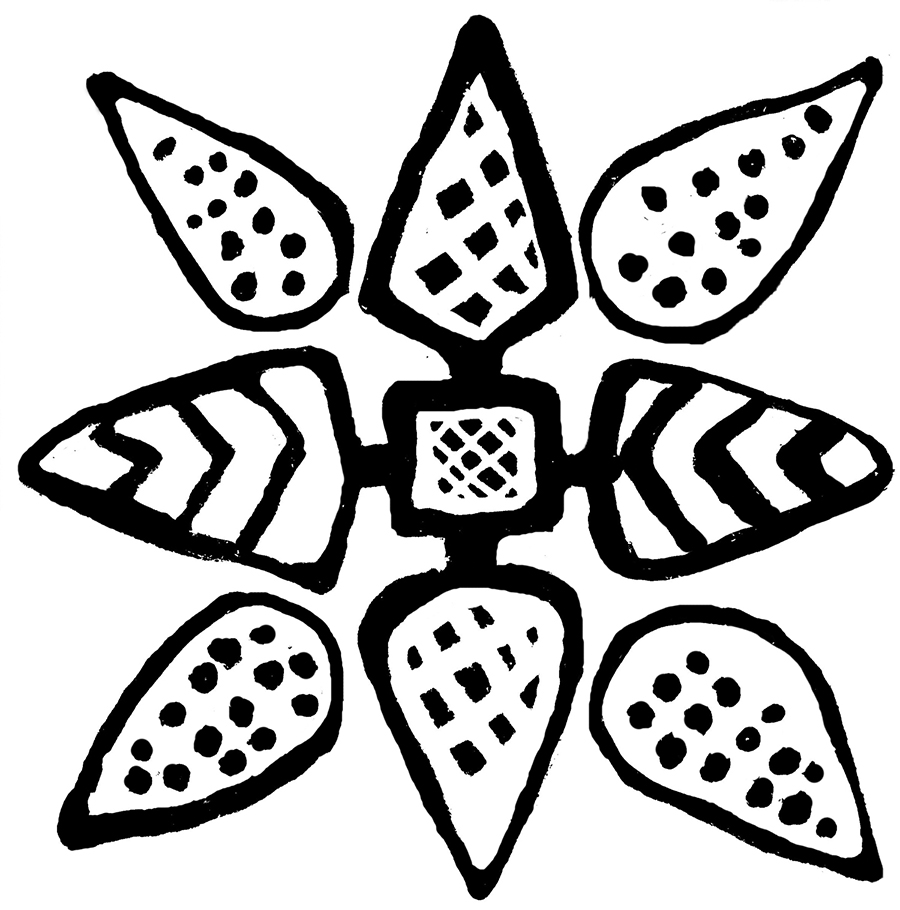